Graham Foster and Lauren Zanardelli’s restaurant hits the right notes with a casual, thoughtful menu which includes a terrific hamburger and a stellar pickle plate. 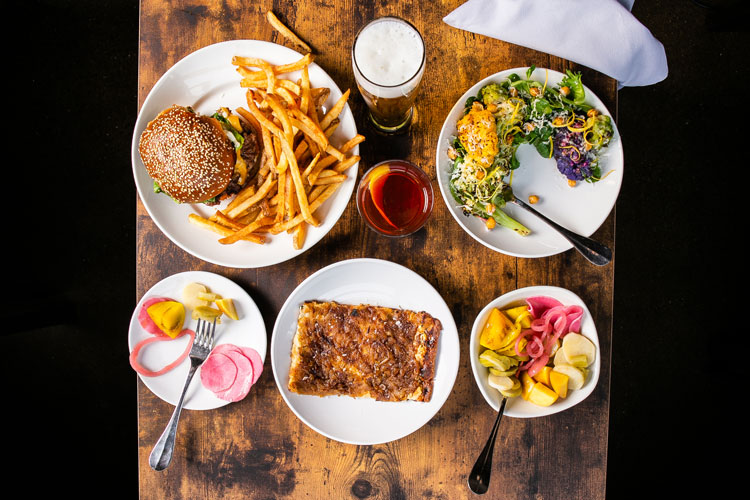 I was smitten by Fairlane on my initial visit in February, when I demolished the establishment’s burger. Two thin, griddled beef patties, tangy house-made pickles, crisp lettuce, thin slices of onion, American cheese and Duke’s mayonnaise (and thank you, no mealy out-of-season tomato) forged perfect umami harmony inside a soft, house-made brioche bun. This burger, like the restaurant, isn’t aiming to impose any wow-factor; it’s simply a proper diner-style burger made with good technique and quality ingredients. This, more or less, is what I’d say about Fairlane overall. Even though it’s just a few months old, Graham Foster and Lauren Zanardelli’s Mt. Lebanon restaurant already is one of my favorites in the South Hills.

Foster and Zanardelli — the couple shares executive chef duties — offer a one-page menu that has a handful of snacks, shared plates and main courses, plus a few daily specials, and nearly everything costs less than $20. On that menu are flavor-forward dishes such as bitter, charred winter greens topped with chopped hazelnuts and dressed in garlic vinaigrette, and options such as a totally respectable, if a bit basic, ricotta gnudi that would make a regular of a more conservative eater. 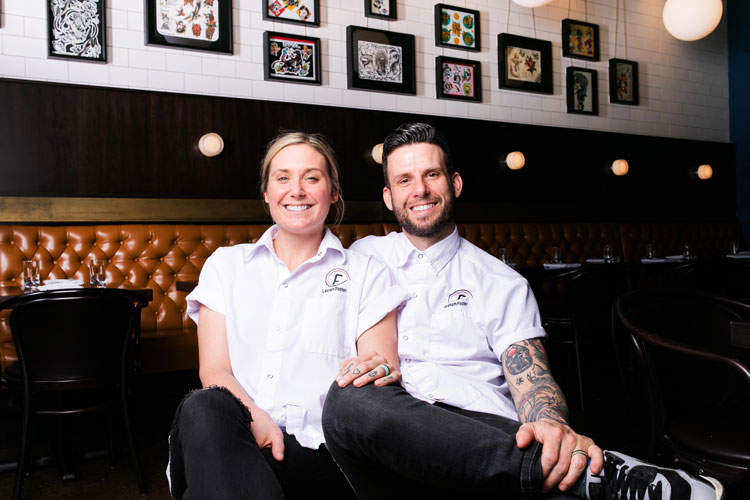 Zanardelli grew up in Bethel Park and left the region in 2006 to attend culinary school at Johnson & Wales University in Charlotte, N.C., which is where she met Foster, a native of South Carolina. They both worked in restaurants in New York City following culinary school and later operated Neue Southern, a food truck, in Greenville, S.C., and Portland, Ore., before landing in Pittsburgh in 2016. Foster picked up a job at Casellula and later at Bar Marco, and Zanardelli at Block 292, where she worked until it closed in 2017, and then at Dinette, but all along they planned on opening their own restaurant. After looking at several locations, it was Block 292 owner Brooks Broadhurst — he still owned the building — who drew the couple to Mt. Lebanon. They decided to open Fairlane in that space.

Aside from a fresh coat of paint and a dressed up wall with flash paintings from tattoo artist Evan Desrosiers, the space remains similar to when it was Block 292. It’s comfortable and coordinated, with complementary wood tones throughout, down to the exposed ceiling joists. There’s a touch of vintage diner in the vibe and a bit of contemporary design in upholstery — all in all, as a friend said, “They’re not reinventing the wheel here, but what they did works really well for them.” Also of note: Foster and Zanardelli transformed the adjoining space, which previously housed Block 292’s butcher counter and grocery store, into a bottle shop stocked with a rather lovely beer and wine selection. 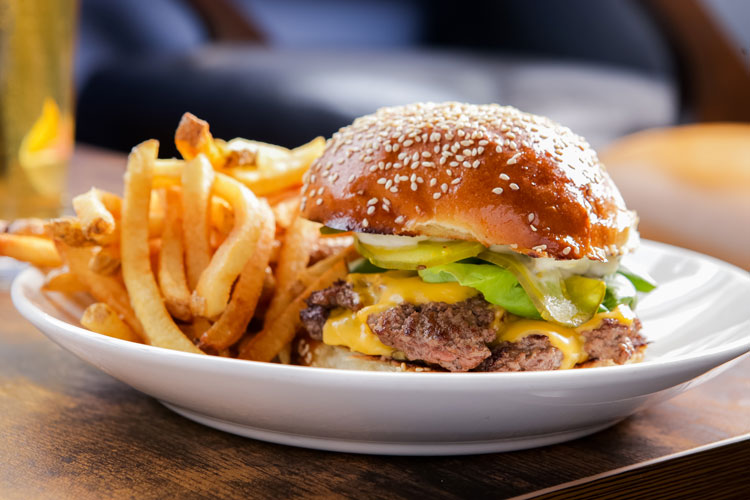 Some dishes on the Fairlane menu, such as pea-pickin’ cake, are full-Southern; in this case, it’s a recipe from Foster’s grandmother that was cleaned up with higher quality ingredients. “It’s like a pound-breakfast-winter cake,” a friend said of the dense, moist cake that reminded me of an old-school bake sale star-turn. There’s also fried chicken night every Monday, when three pieces are served with a giant biscuit and pimento cheese. There’s a nice crackle to the breading, which, with its double-flour dredge, hits the crispy and salty and crunchy notes one wants when eating fried chicken. But parts of it fell off in planks when I bit into it, which is not a good thing. Some of the chicken was succulent, but other pieces (the breast, especially) were over-fried to a chewy toughness resembling fruit leather. On the upside, the biscuit was exemplary, and I could have eaten a bucket of the pimento cheese. 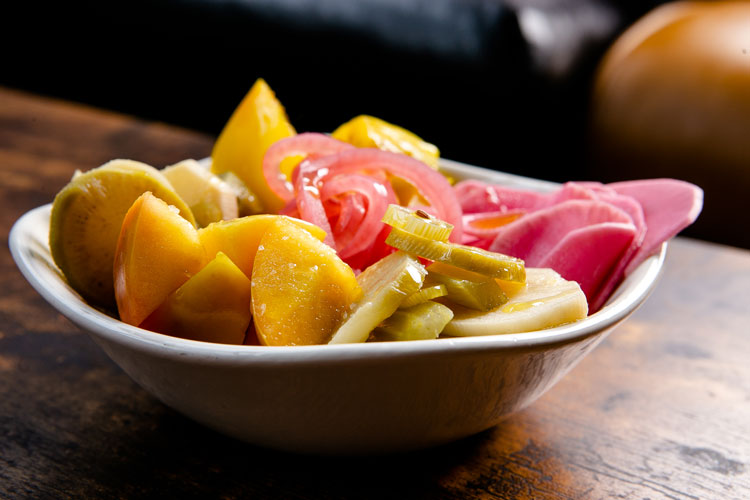 Vegetables, overall, are treated with respect at Fairlane. A tasty late-winter dish of grilled cauliflower and broccolini, served with greens, crispy roasted chickpeas, toasted garlic vinaigrette and generous shavings of grana padano, hit the mark. An onion tart featuring onions caramelized to sinful sweetness and adorned with just the right amount of thyme, Goat Rodeo cheve and saba was a perfect seasonal starter. And the pickled plate, which, when I had it, was an amalgamation of green tomato, cauliflower, carrot, apple, turnip, rutabaga, ginger and red bell pepper, each pickled to their own specifications, is tart, sweet, spicy, warm-spiced and crunchy. It’s absolutely fantastic.

Brunch, which debuted at the end of January, is a work in progress. It’s a pretty heavy menu, with too much egg and too much mayonnaise and in contrast to the dinner menu, not enough vegetables. That’s not to say there aren’t a few very good dishes. Foster and Zanardelli’s stellar biscuits set the stage for an excellent Benedict that features a perfectly poached egg, tangy hollandaise sauce, punchy green tomato and sweet maple ham all shining in their supporting roles. Fairlane’s breakfast sandwich is a winner, with a just-runny egg oozing into salty-sweet and crispy house-cured bacon and gooey, melted American cheese; all it needs is a smaller bun, as the fillings of the sandwich get a bit lost. Other dishes, such as beets with greens, felt a little flat, and one, shakshuka, needed more testing before it made the menu — its sauce was overly concentrated and far too sweet. And while service was at the right tone and energy (informed, mellow and handy with a water pitcher) for a lazy Sunday afternoon, our server also took an order for a cinnamon bun but later, when asked why it hadn’t arrived, informed us it was already sold out. 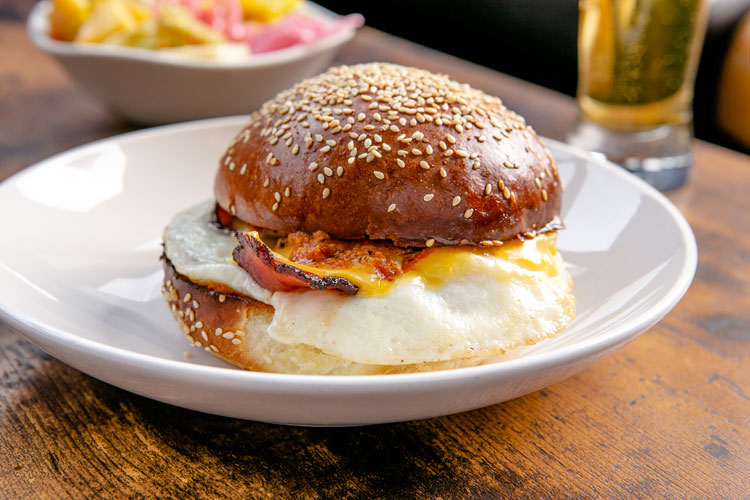 Fairlane’s strong cocktail program is arguably the best in the South Hills. The bespoke list is smartly restrained to just five cocktails, my favorite of which is the Fig-et About It; it’s a remarkably balanced Fernet Branca cocktail that, with the addition of Cointreau and red zinfandel, drinks fairly boozy but is offset with lime juice and fig jam. Classics such as Paper Plane (bourbon, amaro, Aperol, lemon juice) are precisely prepared and very drinkable, too.

I love the direction Foster and Zanardelli are taking Fairlane, even if occasionally it feels like two younger chefs still editing and developing their collective voice. It’s little things that’ll make Fairlane even more special than it already is: paying more attention to the fries served with the burger — a limp, oily and over-salted demonstration that everybody doesn’t need to make their own French fries — and tearing the full leaf red romaine lettuce into smaller pieces prior to dressing it with escarole, dates, scallions, Parmigiano and sherry vinaigrette so it doesn’t eat like a wrap hungry for a filling, for example.

Overall, I find myself somewhat envious that this restaurant is in Mt. Lebanon rather than closer to my home in the East End. I’m glad that this duo of chefs chose to make the Pittsburgh region their home and launch the next part of their careers here.

This article appears in the May 2019 issue of Pittsburgh Magazine.
Categories: From the Magazine, Hot Reads, Restaurant Reviews