With a little work, the Strip District restaurant could become a Pittsburgh classic. 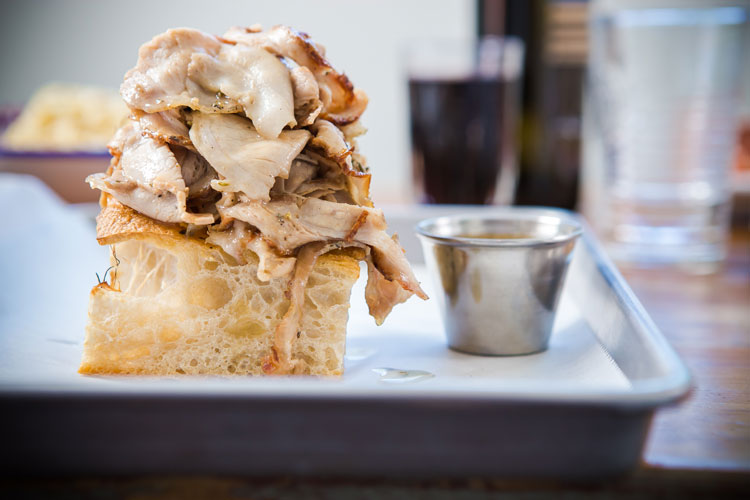 DiAnoia’s Eatery, which opened in November in the Strip District, bridges a physical and culinary gap between the tried-and-true foodways of the Strip and the forward-thinking restaurants of Lawrenceville. It’s an establishment with the potential to make everyone from your meat-and-potatoes-only pal to your food-obsessed family member happy.

I can picture DiAnoia’s as a destination that my eventual successor celebrates 30 years from now in a Pittsburgh Magazine story about “The Classics.”

It’s a lovely picture. But let’s focus on DiAnoia’s today. Although I like what already is happening, there is room for improvement.

The restaurant is comfortable enough by day — and sitting at the marble bar is a treat no matter the hour — but the dining room is far too bright and far too loud at night. I’m also not a fan of the wine-bottle chandeliers, which look a bit too homespun. More engaging is the abundance of locally crafted art, particularly the bright mural painted by artist/musician Diego Byrnes.
​ 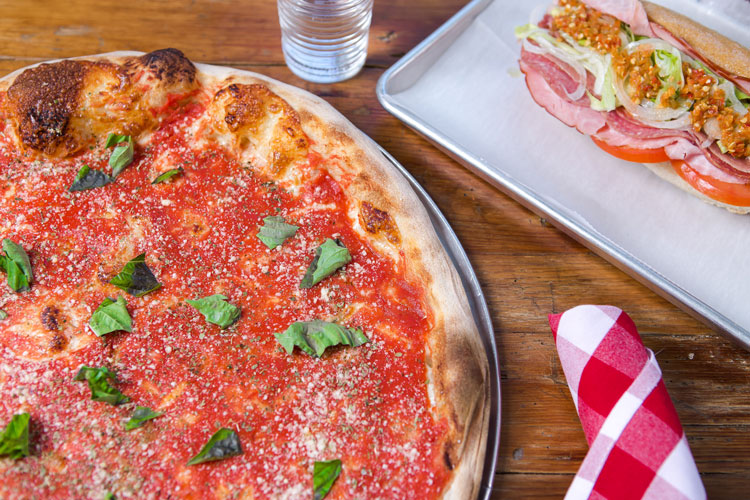 Anoia, who for six years was chef de cuisine of Spoon in East Liberty, runs the kitchen. He pulls from Italian-American red-sauce joints, Long Island Italian deli culture and culinary inspiration gained traveling to Italy to craft a series of menu offerings that change throughout the day.

An egg sandwich, served as it should be on a Kaiser roll, transports me back to my favorite New York City corner delis. It’s a simple build: roll (house-made, as is all the bread, by talented baker Ben Martin), fried egg and American cheese; you can add meat, but I prefer to keep it straightforward. Have it with a bracing shot of espresso. Fruity and bitter, it’s as good as any third-wave coffee shop in Pittsburgh. Or have a nip of something stronger. There aren’t any places I know of in Pittsburgh where you can get a breakfast cocktail as tasty as the ones offered at DiAnoia’s.

Bar Manager Heather Perkins, a longstanding leader in Pittsburgh’s bar industry, crafted a menu of “Morning,” “Noon” and “Night” cocktails that get stronger through the day. I haven’t had a bad one yet, and I particularly enjoy the crisp Martini Perfecto, the sophisticated Godfather and the I-want-to-have-two-of-these-but-it’s-breakfast Merda (which tastes better than its name). 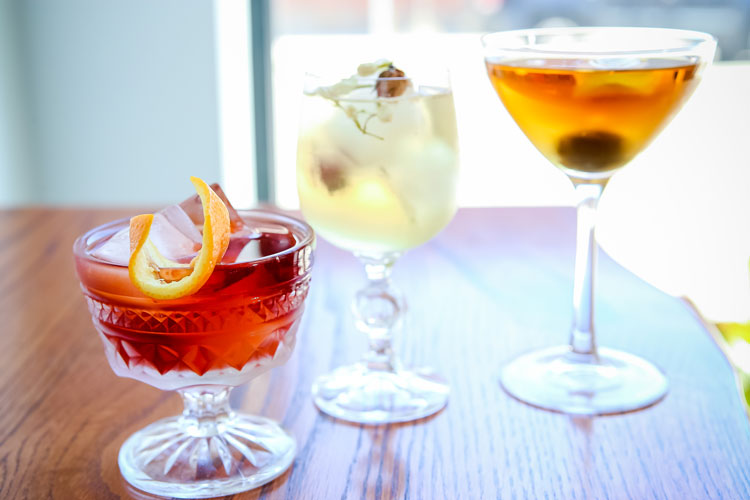 The lunch menu is dominated with sandwiches stuffed with fillings that never quite seem a match for the puffy, cylindrical rolls in which they are served. Still, porchetta, sweet with pork and bitter from rapini, and Italiano, which struts to the border of Hoagietown, are worth ordering. I also like Lebanon sweet bologna, a decadent nod to Anoia’s eastern PA hometown.

Some of the other lunchtime dishes are better. Roasted cauliflower is properly toasty, and the pesto and pine nut topping has an herbaceousness zing and a subtle, sustained heat build. Tuna and octopus salads both are balanced, thoughtfully constructed options for diners aiming for a light lunch.

Anoia’s 16-inch pizza is one of the better gas-oven-style pies in Pittsburgh. It has a thin center that gives way to a thicker rind and slightly sweet sauce reminiscent of something you’d find in Hoboken or Jersey City. I’m a little sad it’s not offered by the slice. Or maybe I’m happy about that because I easily could add one as a gratuitous supplement to my meal just because I’m there and it’s there.

Baseball-sized meatballs — offered at both lunch and dinner — are based on a recipe from DiAndrea’s maternal grandfather, who was a U.S. Navy chef during WWII. Oven-browned on the outside and a soft blend of meat, fat and breadcrumb on the inside, they are served in a tasty, homestyle marinara sauce. 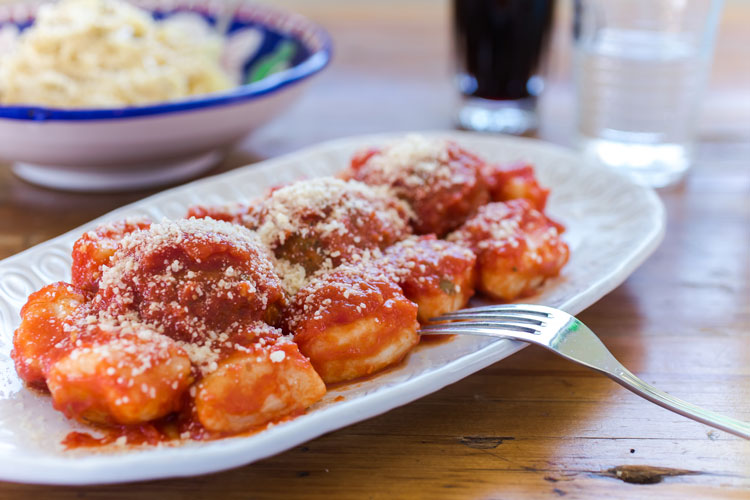 For dinner, I hope I always go with enough people so as to not have to decide between the branzino or the porchetta because they were two of the most satisfying dishes I ate in Pittsburgh during the winter. Branzino, with shatter-crisp skin, is enhanced with a hint of citrus, a bit of salt and high-quality olive oil. It’s served with airy Pennsylvania potatoes — boiled and then twice-fried — in a light tomato sauce.

Oh, but that porchetta. Crackling skin gives way to a thin layer of fat and then mouthwatering muscle. It’s served with a hunk of focaccia that begs you to run it through the roast’s drippings, which are served alongside the meat. Give in to the urge to do that.

Pastas can be a good choice, too. Gnocchi, soft and nearly creamy, holds onto its potato flavor. The tagliatelle was a surprise hit, with bitter, charred radicchio, sulfurous shallots and subtly funky Gorgonzola. Sometimes, though, the pasta dishes turn goopy; I hope Anoia and his staff will pay a bit more attention to cooking time and texture.
​
Anoia is less successful when he tries to replicate his Italian memories. Tortellini en brodo has a big, meaty flavor but its broth is far too rich for what should be a sublime dish. Steak Florentine, while cooked to temperature, doesn’t sing. I could do better at home.

From kitchen to table, DiAnoia’s has the warm, friendly, “we’re family” part down pat. Now, I’d like to see Anoia and DiAndrea tighten up a few things in the kitchen and soften the rougher front-of-house edges. 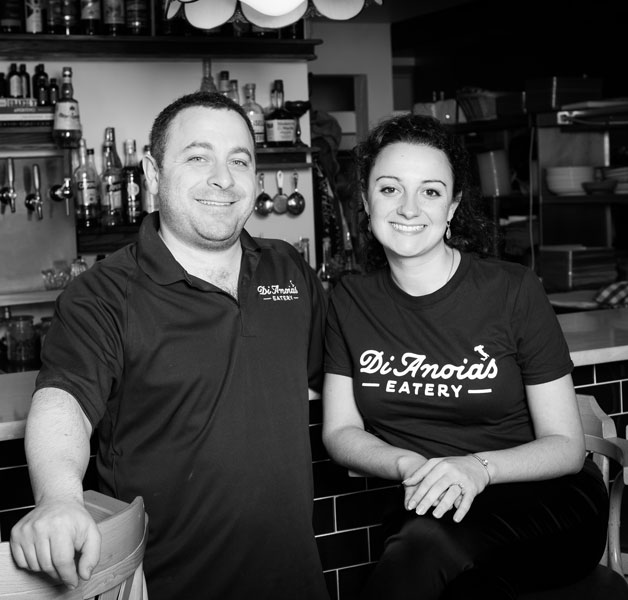 Why leave Spoon to open your own restaurant?
[Anoia] As great as Spoon was and with everything I learned there, I thought it was time to branch out and do my own thing. I got married to Aimee about six months before I departed Spoon. We put our heads together and thought about what our dream would be, and this is what came out of it. We went to Italy two years prior and found we liked this very casual atmosphere.

Why three menus?
We needed to fill the space. I felt that we could service our guests better with a sit-down menu for dinner, but I didn’t want to do that for lunch. For that, I thought we needed that Long-Island-style deli where you could just walk up, order, sit down and then someone will bring the food out to you.

You seem as though you’re straddling a line between Italian-American and Italian cuisine. How did you think about creating the dinner menu?
We want to keep everything super simple, no matter if it’s Americanized or if it’s traditional Italian. For dinner, we try to stick closer to the traditional Italian, but we’ve also had to make some changes. For example, we opened with a lasagna that was something I found all over Italy. It’s a bechamel-based white sauce with just a little bit of red sauce on the top, but it didn’t translate very well; people kept asking for extra gravy boats of red sauce. It’s a fine line.

What’s the idea behind the different cocktail menus?
Heather came up with that. We were trying to figure out how to make a cocktail list rather than just a list of cocktails. What would entice people to buy more than just looking at a list? And the three sections fit perfectly what we’re doing, since we’re open morning, noon and night. Morning is low-alcohol drinks like you would find in Italy. You can get anything from any of the sections all day.

You’ve created quite a community space here. At any time in the day you’ll see people in the restaurant industry but also a place that’s been welcoming to the community in the Strip.
It just happened. We always dreamed of this. We’re so happy with what this is now. When we started we wanted to do a little deli with some pizzas and things like that, but we think we came across an awesome space in an area that’s coming along. It just grew and grew from there into this.

This article appears in the May 2017 issue of Pittsburgh Magazine.
Categories: From the Magazine, Hot Reads, Restaurant Reviews