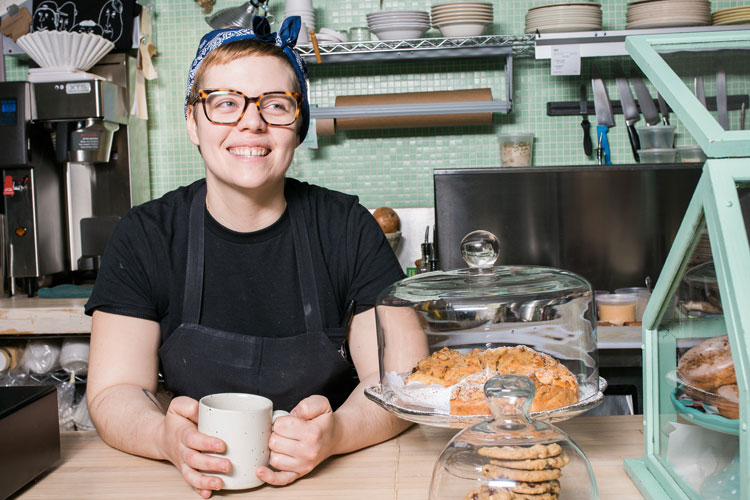 On a cool March afternoon, with the western Pennsylvania cupboards threadbare and we who garden staring through the window longing for our barren, frost-nipped soil to bloom with bounty, I took a bite of a piece of toast topped with peaches and jubilantly pounded my fist on the counter at Bitter Ends Garden & Luncheonette. “Summertime!” I shouted to nobody in particular.

Becca Hegarty, co-owner and chef of the Bloomfield lunch counter, with her crew of young farmers and woke fermentos, preserved those peaches and other produce at the peak of their seasons. She lobbied on social media to get Neil Young to try them before his performance at the Farm Aid festival in Burgettstown in September, but the legendary singer/songwriter didn’t bite. Too bad for him. Over the course of three weeks in March, Hegarty’s “Neil Young peaches toast” became the stuff of legend.

It was so simple: preserved peaches served on grilled house-made, whole-wheat sourdough with a smear of Goat Rodeo Dairy chèvre, a crack of black pepper and a dash of olive oil. 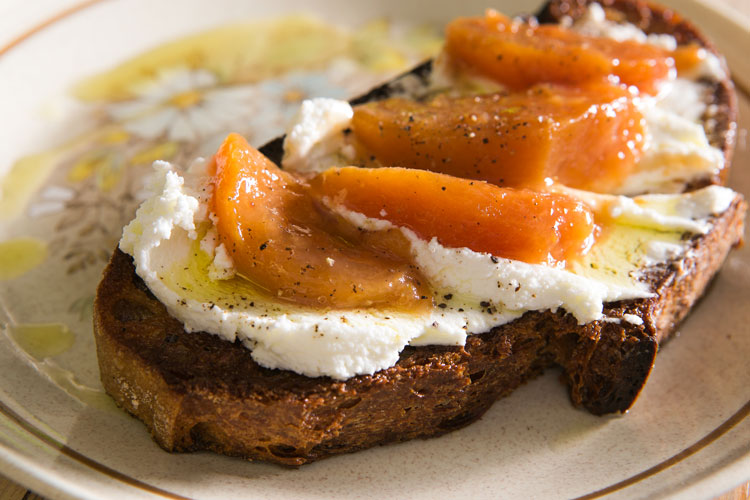 Bitter Ends Luncheonette is one of my favorite openings in three-plus years as Pittsburgh Magazine’s restaurant critic. There are significantly fancier restaurants with more formal service than this order-at-the-counter nook that was built on a $20,000 budget. Hegarty’s menu is as narrow in options as the restaurant, which has 17 seats, is confined in square footage. However, top-to-bottom, what Hegarty and her team are doing for food systems and the community is precisely what I’d like to see more of in Pittsburgh.

It’s easy for those with a traditional view of dining to dismiss Bitter Ends as millennial-twee, crunchy granola or, as someone put it, reminiscent of Soviet-era cafes.

I get it. Hegarty and co-owners Jason “Joddo” Oddo and Lou DeVito run a quarter-acre organic farm (an additional acre is in the works), and they Instagram varietals of rare radicchio and cabbage. Parcels of dried herbs, garlic and flowers hang from the walls. There is a lot of brown bread. And onions. So many onions. 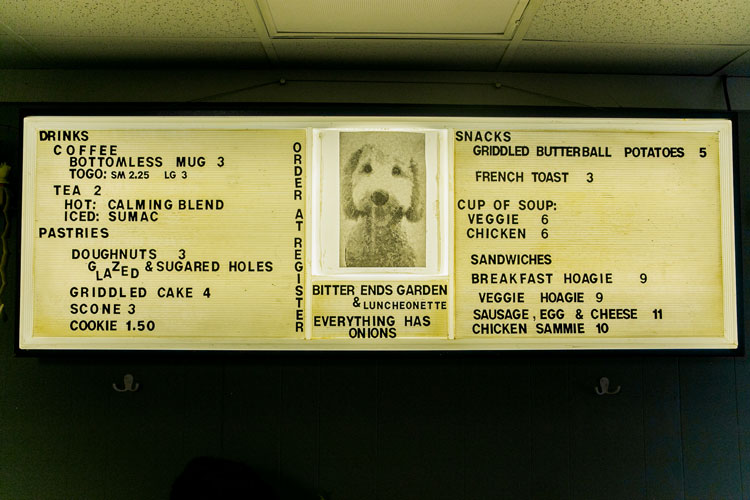 Bitter Ends is a breakfast and lunch counter that mingles more deeply with old-time luncheonettes of yesteryear than the seemingly hipster vibe you might, at first, glean from the largely plaid-shirted crowd. Witness Hegarty joke with a local guy who pours a bucket of sugar into his coffee while recommending she serve Maxwell House and also he’d like a job, and tell me that doesn’t remind you of a neighborhood diner. The difference is that Hegarty is a much better chef than your typical burn-and-turn griddle cook. And she’s using exceedingly superior ingredients.

Hegarty’s professional career kicked off at Woodbury Kitchen in Baltimore, but it’s the influence of two Pittsburgh-based chefs — Sonja J Finn and Rick Easton — that is most evident at Bitter Ends. There’s a “Sonja Sits Here” sticker on the seat at the far end of the lunch counter (don’t worry, you can sit there, too) for a reason; she worked under Finn at Dinette and helped her open Cafe Carnegie, for which Hegarty was the chef de cuisine until April. Hegarty worked with Easton at his sensational, now closed, Bread & Salt Bakery, learning the art of bread-baking and finding inspiration in Easton’s fastidious appreciation of high-quality ingredients.

Hegarty pulls the best from both, and now is beginning to speak with her own culinary voice. She is a two-year James Beard “Rising Star Chef” award semifinalist and last year was named one of Zagat’s initial 30 Under 30 cohort, amid other honors. 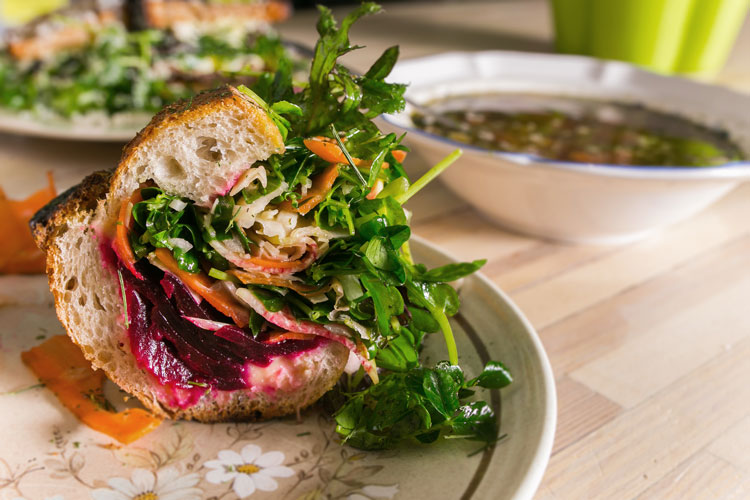 The menu at Bitter Ends is limited to a handful of sandwiches (all on house-baked bread), a few soups, a smattering of sides and a selection of pastries. If you’re one of those people who desire scope of choice, this might not be the place for you; or, take it as an opportunity to learn that curated almost always is better than limitless.

Even in the bleakest depth of winter, vegetables take center stage. “I never order vegetable sandwiches because I worry they won’t be substantial. But this is full of flavor,” a friend said while digging into a vivid vegetable hoagie with a double-earthy base of Cannellini bean puree and beets, brightened by pea and sunflower shoots, radishes, carrots, turnips and onions. It was early spring sneaking into our consciousness disguised in sandwich form, even if I did wish the baguette was less compact football and more airy zeppelin.

The shoots, the first of the season from Who Cooks For You? Farm, one of several partners that the restaurant creates a community with, also appeared on a breakfast sandwich, with a sausage patty, salty and griddled on the edges, made with pork from Fallen Aspen Farm, an egg with a yolk like sunshine from her neighbor Howard Mickley, Milky Way Meadow’s cheddar and a handful of baby bitter greens. It was yet another sandwich that made me feel the pinging for transition to the new season.

I also love the chicken salad sandwich, which appears to be a staple on the menu. Juicy pulled chicken paired with shoots and herbs such as baby chervil and parsley are piled inside slices of griddled whole-wheat bread. It’s simple and satisfying. Pair that with one of my favorite side dishes, smashed griddled potatoes, buttery and crunchy from both the griddle and the toasted breadcrumbs they’re mixed with, uplifted by vinegar and onions, and you’re in for a solid lunch. 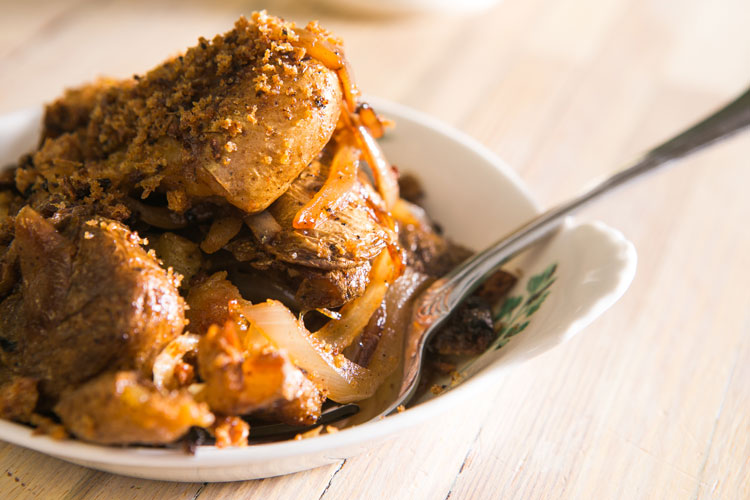 While the onions were appropriately portioned on the potatoes, Hegarty does have a stronger affinity for the allium family than anyone without a salacious inclination toward seduction by shallot would appreciate. Tomato and bean soup, for example, tasted more of shallots than tomatoes, and it also was overwhelmed with dried dill and “spicy” Espelette pepper (which wasn’t at all spicy). I wanted more of the plump and creamy Purgatorio beans Hegarty and Oddo grew at their farm — they sure do know how to work a bean here.

Hegarty is a multifaceted baker who handles both bread and pastries with aplomb. Pea shoot icing on a delightful, not too sweet, donut was a whimsical choice. Rye chocolate chip scone, perfectly dense and crumbly, is a sleeper hit, and Hegarty hits another textural sweet spot with chewy, buttery cookies. Do make it a point to add a dessert to your meal or get one to go. 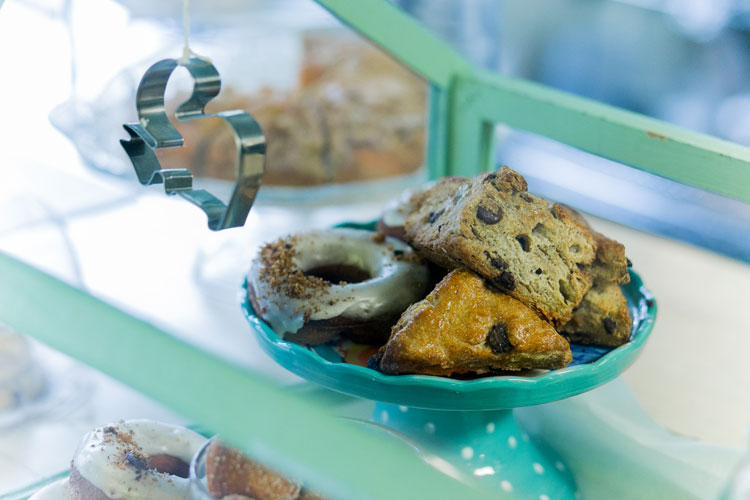 My hope for Hegarty is that she allows herself time to grow as a chef. I’d also like to see her menu be slightly less stagnant; I suspect that as more produce pops on her farm and in other local fields that will happen. My hope for Pittsburghers is that they support establishments like Bitter Ends that focus on quality over quantity, and, even if the amount of both seats and sandwiches might feel limiting, we push past that. There’s plenty of room and plenty of need for fine dining establishments in Pittsburgh, but there’s even more of a need for luncheonettes like this that build community, support local foodways and focus on finding the best.

Neil Young, you blew it when you missed the peaches, which now are off the menu. Come back to Pittsburgh, brother, because this joint is going to keep on rockin’.

This article appears in the May 2018 issue of Pittsburgh Magazine.
Categories: From the Magazine, Hot Reads, Restaurant Reviews