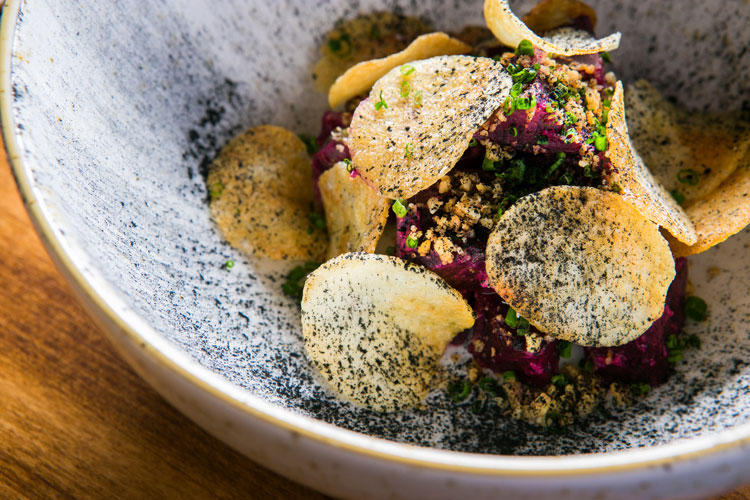 My neighbor, Cathy, tells stories about hanging out on wild, buzzing Walnut Street in the 1970s and 1980s.

Aside from the beloved — and very good — Girasole, no.

So, imagine how agreeable it is to pop into Acorn, which opened late last summer, on a Wednesday or Friday night and see the joint jumping with groups of enthusiastic diners in their early- and mid-20s sharing plates of Executive Chef/Co-Owner Scott Walton’s cuisine. Or how charming it is to sit with the Williams-Sonoma set for a casual afternoon lunch. 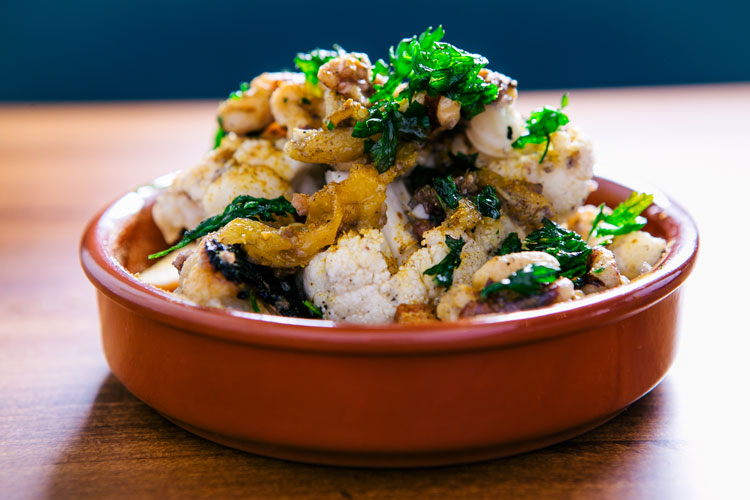 I like a lot of what’s happening at Acorn. Yet after each visit I found myself wondering about the restaurant’s identity and Walton’s voice. Is it seasonal? Is it New American? Is it Nordic? Is it trying to appeal to Pittsburgh or push forward? They’re getting closer to figuring it out.

Walton and his wife, Maggie, moved to her hometown Pittsburgh in 2014, following the birth of their first child. The couple felt that raising her in a smaller city would be more fulfilling than doing so in the hustle and bustle of Chicago. Walton accepted a position as the executive chef of Heinz Field, where he used his prior experience running massive culinary operations — for example, overseeing the kitchens of the Sheraton Grand Chicago — to bring a thoughtful, scratch-focused dining program to the home of the Pittsburgh Steelers.

He aims for a significantly more intimate concept at 70-seat Acorn. The restaurant, in many ways, fits its locale — it’s neither high- nor low-concept, instead filling a needed niche where you’ll feel comfortable if want to dress up just a little bit in, say, something you might find at the nearby Banana Republic, and bring a date or a visiting parent for a nice meal, yet not so formal that you feel you’d feel unwelcome for casual Tuesday night pop-in. 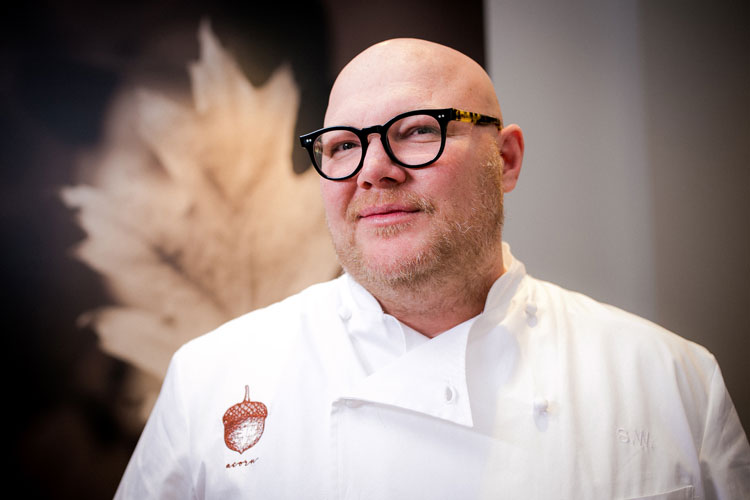 mossArchitects’ cozy, Scandinavian-influenced interior helps create that atmosphere. Andrew Moss and his team, armed with an array of cool, oceanic color accents and warm pine tabletops, crafted a minimalist space that feels significantly more upscale than a typical Pittsburgh restaurant yet remains approachable as a neighborhood space. It’s one of my favorite restaurant designs of the past year.

Walton’s dishes can at times feel conceptual. That doesn’t bother me because he also cooks with artistry and soul. The concepts, even if they don’t always work, are geared toward the dish, not showing off what a great culinarian he is.

Take “Beans and Greens” a dish that, particularly in western Pennsylvania, suggests a bowl of escarole, white beans and, perhaps, sausage. Walton’s mixed-bean blend (split pea, Christmas and cannellini beans cooked in duck and rabbit stocks; a vegetarian option is available) is topped with peppy salad greens and a tangy raisin vinaigrette. The presentation, more salad than stew, likely will upset semantic traditionalists. It’s scrumptious, though, warming and filling in a way that doesn’t leave you wonderous heavy. 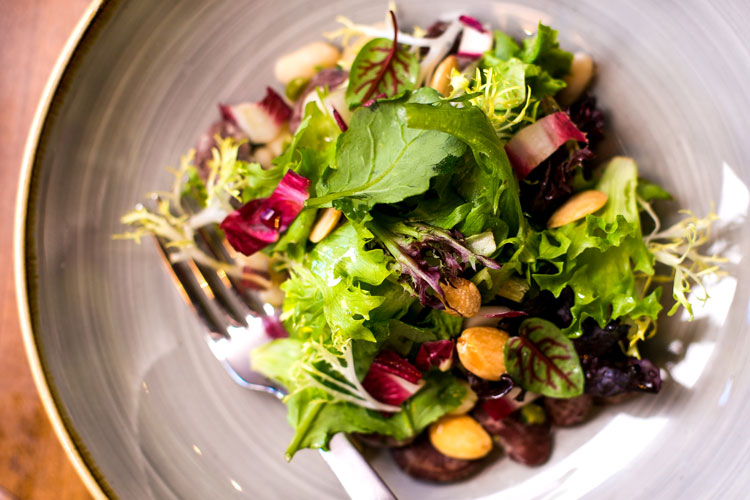 Beet salad is no less sculptured — there is a snowfall of popped sorghum, for example — but conceptually more straightforward. The functional rainbow of purple, white, green, pink, tan and yellow is smokey, salty, sweet, peppy and crunchy. “I’m not usually wowed by salads,” a friend said. “Both of these are stunning and delicious.”

Beets also played a starring role in one of my favorite dinner dishes. In this permutation, magenta beets are cooked to mild smokiness over charcoal; the carbonized beet skins are powdered, dusting the grey ceramic bowl with a thin layer of black. An off-white base of tangy, housemade goat-cheese blended with whey gremolata compliments the dramatic char, and crisp, thin potato chips and a pop of verdant watercress cap the luminous, and perfectly seasoned, dish that transported me to autumn in Iceland.

Sometimes, Walton’s experiments take an odd turn. On one evening, trout floated on a cloud of what appeared to be burnt marshmallow fluff. The “fluff” actually was aquafaba, whipped leftover chickpea cooking water, a concoction often served as a vegan substitute for … marshmallow fluff. This permutation was sweetened with smoked maple, and, while I enjoyed the pairing of the char of the fish and the char of the aquafaba more than the rest of my table, we all agreed that this was an odd duck of a dish.

Overall, Walton thoughtfully tests dishes, though sometimes, for good reason, he keeps toying with them after they make the menu. Over several visits, I noticed the development of a cauliflower dish that almost but didn’t quite work the first time I tried it and was undoubtedly a keeper several weeks later. Layered with various tones of tan, green and brown, roasted cauliflower was deftly presented with toasted walnuts, crispy parsley, dried apricot, bagna cauda and croutons; aside from the too-oily croutons, Walton worked through the kinks to find cool harmony in the dish. 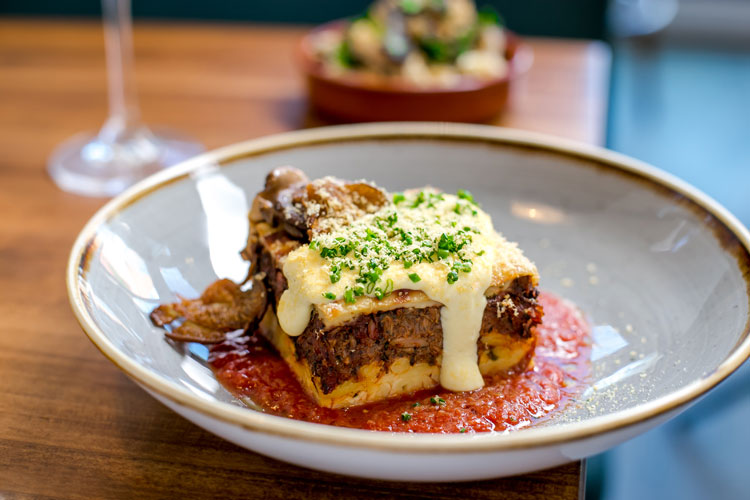 It’s the occasional and unnecessary departure to throwback classics that tend to gum the works at Acorn. For $74, I’d expect the mid-century dish of beef tenderloin, veal stock reduction with brandy and dijon, mushrooms, radishes, truffles and shallots, to meet my “Mad Men”-era ideal. It didn’t. First, it should have been flambéed at the table — at a restaurant so thoughtful with plating and with a flair for drama, they missed the easy boat with this one. Instead, we were served a brown mess of a plate with cool-to-the-touch, slightly gummy steak that wasn’t seared enough on the outside. I’m glad the mushrooms and the homey-and-comforting celeriac pot pie served with the dish were better.

Why a throwback dish like this in a restaurant where Walton’s cuisine demonstrates strong New American and Nordic influences? If you’re going to bother serving a legacy dish at a forward-thinking restaurant, either nail the classic because you love it or demonstrate why it needs reinventing.

Service, in general, is energetic, enthusiastic and informed. I do wish that the waitstaff didn’t at times suffer from a service snafu that’s become endemic at many Pittsburgh restaurants: begging for compliments. The “Isn’t everything great?”, “Don’t you love the Brussels sprouts?” and “Are you just so happy with these courses?” isn’t necessary when a simple, “Do you need anything” is, actually, all we need. Plus, I didn’t love the Brussels sprouts, and I felt a little uncomfortable having to be disingenuous by implying that ranch dressing and bleu cheese were somehow a good idea to pair with charred sprouts.

Acorns are inedibly bitter if you don’t treat them before you eat them, and Walton’s Acorn could have done with a bit more attention before its choppy opening. It’s a good thing the talented chef kept working, because, while there still are flaws at Acorn, with continued pruning it’ll blossom into something worth looking at.

This article appears in the April 2018 issue of Pittsburgh Magazine.
Categories: From the Magazine, Hot Reads, Restaurant Reviews