Restaurant News You Can Use: Over Eden Opens at TRYP Hotel

Look for light and shareable Levantine cuisine at the restaurant on the roof of Lawrenceville's new boutique hotel. 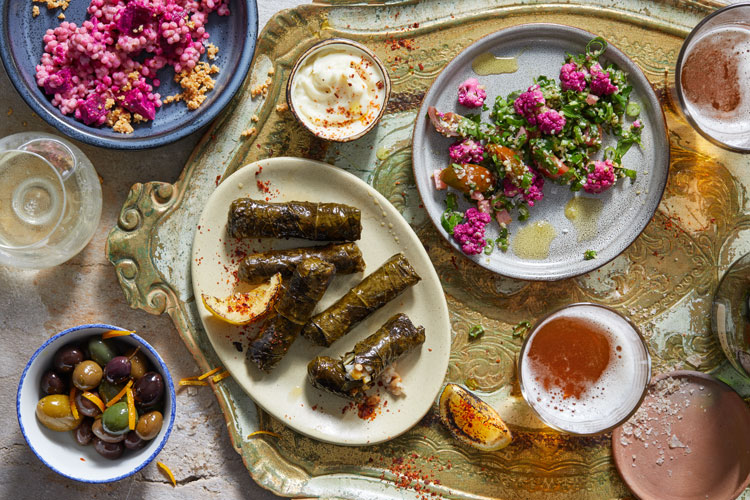 The dining boom in Lawrenceville continues apace: Over Eden, one of two planned restaurants in the new TRYP Hotel, soft-opens this weekend. It’s perched on the roof of a lovingly restored 1869 former vocational school, which is listed on the National Register of Historic Places.

“The menu is designed for sharing and for grazing. We want this to be a rooftop garden where people come to hang out,” says Executive Chef Brandon Blumenfeld.

Blumenfeld, who also will run the kitchen at the hotel’s more formal restaurant, Brick Shop, comes to TRYP following a stellar run as the executive chef of Scratch Food & Beverage in Troy Hill. Blumenfeld previously worked at Cure, Morcilla and Spirit’s Slice Island Pizza, and, prior to that, at Franny’s and Momofuku Noodle Bar in New York City. Kate Romane, owner of Black Radish Kitchen, is TRYP’s culinary consultant, overseeing the big picture outlook of the comestibles at the hotel.

Blumenfeld’s menu for Over Eden leans vegetarian and vegan — nearly two-thirds the opening menu are meat-free — and is influenced by restaurants such as Zahav in Philadelphia, Saba in New Orleans and Fat Pasha in Toronto. “That’s where my brain led me when they said Mediterranean. For me, this cuisine is something that I’ve been incredibly interested in. I’ve visited Israel a few times in my life, and the food is incredible. This style of eating isn’t really reflected in the Pittsburgh market,” he says.

Look for salatim such as sweet potato with sunflower seeds, black garlic and caraway, marinated artichokes with crispy chickpeas, ricotta salata and pickled peppers, and couscous with beet, urfa and almond. Dips, including tahini-rich hummus and baba ganoush, also are highlights of the initial menu. For meat eaters, there are customizable sandwich and salad options for which rotisserie chicken (the hotel’s rotisserie will be featured more prominently when Brick Shop opens this summer) and the spiced lamb-and-beef sausage kafta can be added. 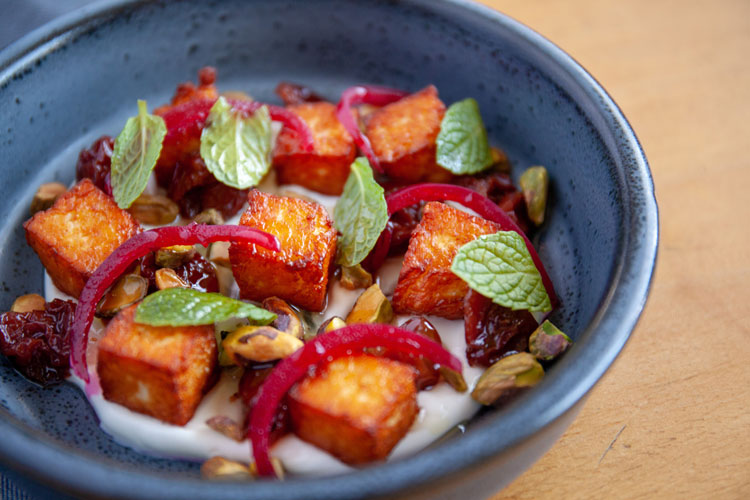 Blumenfeld says that he’ll offer a rotating selection of family style spreads meant to feed four to six people. The initial offering is pastrami short ribs, which is served with rice pilaf, salatim, hummus and pita. “Pastrami is near and dear to my heart. It’s my favorite of all the Jewish [deli] meats. I’ve been working on a pastrami recipe for a long time,” he says.

Holly Smith, the hotels food and beverage director, put together a light and refreshing cocktail menu with drinks such as Chiffon (rum, pineapple juice, rosemary, pink peppercorn, orange bitters), Antidote (lager, Amaro Montenegro, grapefruit juice) and Fast Thrill (mezcal, pistachio orgeat, chartreuse, lime, bitters) on the bespoke cocktail list. She also has three sharable summer pitchers available, as well as four non-alcoholic cocktails. There are five beers and a cider on tap, plus beer in cans, as well as a restrained wine list. Smith comes to TRYP with a strong resume, having previously worked as food and beverage director for The Henry Hotel in Dearborn, Mich. and as the director of fine dining, wine and spirits at Nemacolin Woodlands Resort in Farmington.

Casey Renee, owner of Confections by Casey Renee and formerly of Whitfield at Ace Hotel, is the establishment’s pastry consultant. For Over Eden, she’ll have pomegranate sorbet, tahini-date ice cream and sufganiyot on the opening menu.

“The space leans light and airy, and we wanted the food to be reflective of the space. There is fresh air and good views, and the food is geared to giving you energy rather than bogging you down,” Blumenfeld says.