Zach Behm was chef de cuisine at Cure in Upper Lawrenceville at the time of a July car wreck. 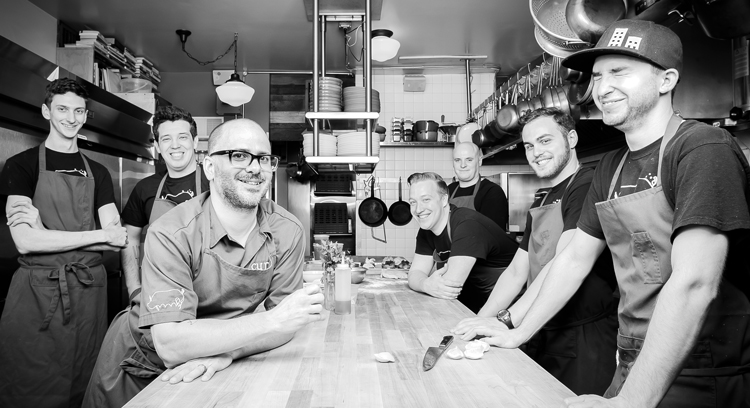 Photo by Laura Petrilla. Behm is the chef back-right.

When Justin Severino, executive chef and co-owner of Cure and Morcilla in Lawrenceville, got off a plane in Los Angeles last July, he learned that Zach Behm, his chef de cuisine at Cure, had been in a horrific car crash late the previous night.

“Cure is such a tight-knit family. At that point [of the incident], Zach had been with us for over two years. He was the rock that made Cure strong before and during the opening of Morcilla,” Severino says.

After speaking with Behm’s family about his chef’s condition, he says, he knew that he wanted to find a way to help one of his crew. “Hilary [Prescott Severino, director of operations and co-owner of the two restaurants] and I pretty much immediately started to think about what we could do. We needed to do something to help, and we were assuming they were going to need some money.”

The couple decided to give Behm’s family space to cope with the aftermath of the accident, and also some time to determine the severity of his injuries.

Behm’s injuries are severe, and though he’s recently returned home from a long hospital and rehabilitation stay, he still requires around-the-clock care. To that end, Severino, Prescott Severino and partners in Pittsburgh’s restaurant industry have organized “Team Behm, A Fundraiser for Zack.”

“I don’t think this’ll be the end of our efforts to help him. We’d like to create a scenario where his family can get some ongoing financial support,” Severino says.