Points of Interest: The Children’s Chair at the Frick Pittsburgh’s Clayton

In a building with hundreds of preserved treasures, one item brings life in the former Frick household into plain view. 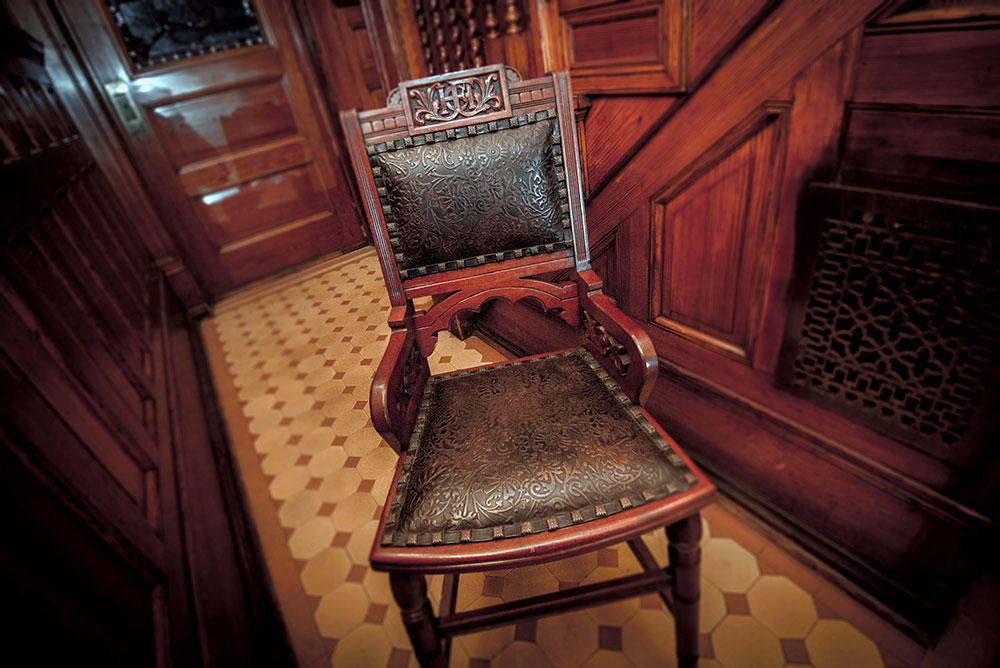 A single chair changed how I looked at Clayton, the preserved mansion and former home of the Frick family in Point Breeze.

The building, two floors of which are featured on a generally excellent, docent-led tour, is packed with the family’s possessions; The Frick Pittsburgh estimates that 90% of the objects and furnishings in the building are original. To me, however, most of the details throughout the house are so ornate that it’s hard to imagine actual life happening around them — not day-to-day life, at least.

When I was told that Henry Clay Frick hosted sitting President Theodore Roosevelt in Clayton’s dining room, that was perfectly believable. When we were shown the children’s entrance, I had difficulty picturing actual small humans scampering about.

(Incidentally, when those children did scamper in, they were probably returning from their playhouse. It’s a two-story building the size of an average suburban home. You know those plastic, Fisher-Price playhouses we had as kids? The Frick version of that was an entire building. With a bowling alley.)

But in the family’s breakfast room — a second-floor dining room used for family meals and Frick’s weekly poker game — a detail changed my perspective. The chairs around the table are handsome, modern-gothic furnishings; each bears Frick’s initials in a delicate monogram.

Tucked to the side of the table, there’s a highchair.

It’s equally as impressive as the rest — the same mahogany and leather, the same “HCF” monogram. Indisputably, though, it’s a highchair; the seat is about a foot higher than the rest and proportioned for a small frame.

We can have a healthy debate about the effect of raising children in this kind of opulence. (Again: There is a bowling alley in the playhouse.) And, while the focus on family togetherness evidenced at Clayton adds an interesting shade to Henry Clay Frick’s historical reputation, that legacy is beside this particular point.

In a building rife with priceless artifacts, which could provide its own master class in design and decor, that highchair sweeps a human moment into stark relief, 14 decades into the future. At some point, the Fricks were just a family deciding on and ordering furniture; at some point, they decided to add highchairs to the set for their yet-to-be-born children.

Regardless of all context and history, there’s immense power in a detail such as that.

There are other such moments to be found in Clayton; I paused for a long look over the books that sat on Henry Clay Frick’s nightstand. (A sample: “Black Diamonds,” by the Hungarian author Mór Jókai; supposedly, it’s a vibrant tale concerning the European coal industry. Frick stayed on-brand, apparently.) The highchair, however, remains the most vivid such instance I saw.