Points of Interest: Monkey Business at the History Center

An 85-year-old amusement tucked away on the fourth floor of The Heinz History Center illustrates how important — and varied — the museum is. 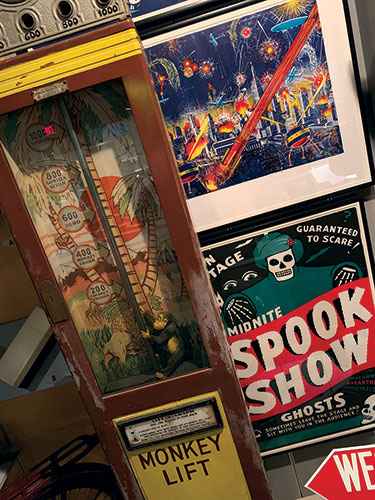 I really, really want to try the Monkey Lift.

On the fourth floor of the Sen. John Heinz History Center, you’ll find the Special Collections Gallery, a sprawling repository of local artifacts. Pieces of Pittsburgh history from centuries ago are here, as well as curiosities from the recent past (look for the “Tom Murphy Mayoral Hot Seat” parking chair by cartoonist Tim Menees). In a slice of the room dedicated to amusement parks and other diversions, the Monkey Lift majestically rests.

It’s a Lift-O-Graph strength tester; the placard claims it’s designed to “test the muscle of your back.” Long-ago visitors to Kennywood Park would plunk a coin into the machine then attempt to lift the lever; the titular monkey would ascend his metal foliage to show your score.

Two hundred points signified that the lifter was a “Coconut Crusher.” You’re a “Monkey Chaser” at 400 points (though I’d posit that moniker is more reflective of leg strength). At 800 points, you’ve achieved the coveted “Gorilla Getter” level.

Brian Butko, the History Center’s director of publications, has written two books on Kennywood and he’s working on a third. He explains the mechanics behind this simian workout simulator: “There’s a tightly wound, thick spring; you were trying to stretch out that spring. Connected to the spring was a chain that went through some gearings that connected to the Monkey Lift part.”

Butko says amusements such as these became popular in the 1930s; penny arcades were around for decades prior, but they were focused on showing single-reel films on hand-cranked devices such as Edison’s cinematograph. “It was a cheap way to see sort of racy, girlie films at the time,” he says, confirming that your grandparents were no less lascivious than you.

With technological advancements, however, purveyors of amusements were looking for flashier fare — such as the Monkey Lift. Some of those Depression-era machines remained in Kennywood’s arcade into the ’70s or later, Butko says.

I’m really into the Monkey Lift (and almost equally enamored with the “spook show” sign next to it). The Special Collections Gallery is my favorite section of the History Center. I’m impressed by the Western Pennsylvania Sports Museum, and I enjoy the Heinz retrospective. But the Special Collections Gallery fulfills a role no other institution could: Preserving, in artifacts, the day-to-day history of the city.

It’s not just relics from Kennywood and the mayor’s office you’ll find here — items that prominent are the exception. Rather, the room is typified by items such as the shamrock that once adorned Gallagher’s Pub in Market Square and other things that illuminate how Pittsburghers spent their days and nights throughout the generations.

It’s excellent that this building can tell the stories of Lewis and Clark, H.J. Heinz and Franco Harris. But it’s remarkable that this institution can also bring us within inches of the tools, toys and times of our direct ancestors. If you visit the History Center, you’ll certainly dally in some of the more eye-catching exhibits. Leave time, however, to wander through the Special Collections Gallery, listening to Mister Rogers sing in the distance — artifacts from his show are here, too — and finding treasures rendered important not by stature but by time.

Anyway, I know I could get the monkey past Coconut Crusher. I’d take Monkey Chaser. That seems like a respectable showing.