Places We Love: The Manor Theatre in Squirrel Hill

Unlike many modern theaters, which are more than happy to bury you so deep in a recliner that you have to crane your neck to see your neighbor, the Manor offers a truly communal experience. 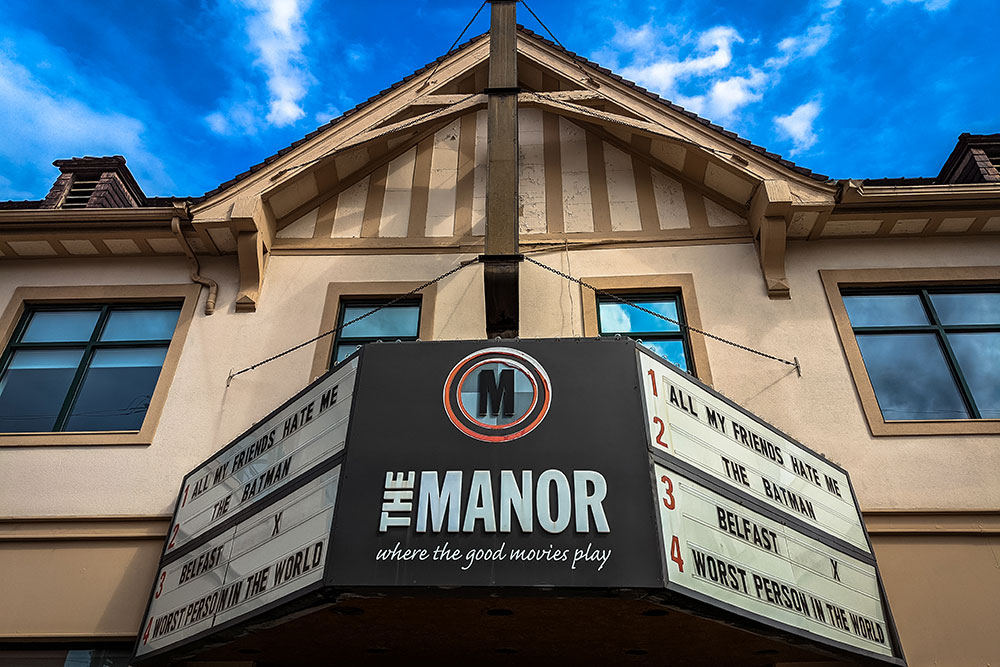 When it first opened its doors 100 years ago this month, the Manor Theatre was a much different place.

The Manor opened on May 15, 1922 on Murray Avenue, with one palatial screen towering over a 1,500-seat auditorium. A contemporary industry publication declared that the new theater had “the atmosphere of a country club,” making note of a marble floor, “heavy velour draperies” and a parlor complete with a roaring fireplace. 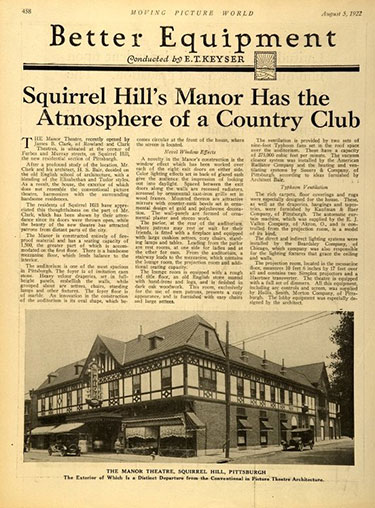 The intervening century has brought consistent reinvention. While many movie theaters — especially the neighborhood variety — have grown stale and, for the most part, gone out of business, the Manor has adapted. It split into two screens in 1978, then four in 1992. An extensive 2012 renovation upgraded seating and introduced a full-service bar (yes, you can have a cocktail with your flick).

Throughout those changes, the Manor has maintained its status as a beloved neighborhood gathering place. “It’s unbelievable how loyal our clientele is,” says owner Rick Stern, “and they just love that theater.”

Unlike many modern theaters, which are more than happy to bury you so deep in a recliner that you have to crane your neck to see your neighbor, the Manor offers a truly communal experience. You’ll know if your neighbors are laughing, shrieking or crying — and you’ll likely join them as emotion sweeps over the room.

Showing good movies helps, too. The Manor typically offers a few mainstream hits, along with critically acclaimed fare selected for its very cinema-literate audience. “Art and specialized film,” Stern says, “has become so much more popular and so much more plentiful … I’d like to think some of [the theater’s] success is attributed to the way we program it.”

To celebrate its centennial, the Manor will spend a week (May 13-19) playing one classic for each decade of its lifespan, including landmark films such as “Casablanca,” for the 1940s, and the new restoration of “The Godfather,” for the ’70s.

In an era when viewing habits are shifting, can the Manor — or any theater — make it another 100 years? The future of moviegoing remains to be seen, but there’s increasing evidence that audiences will continue to embrace outings that feel more like a special occasion; theaters that offer more memorable, distinct experiences than the everyday multiplex are, it seems, bouncing back.

In other words: If anyone can do it, the Manor can.

This article appears in the May 2022 issue of Pittsburgh Magazine.
Categories: From the Magazine, Hot Reads, Things To Do