The park is an urban oasis, a touch of green in the midst of our black, gold and gray concrete jungle. 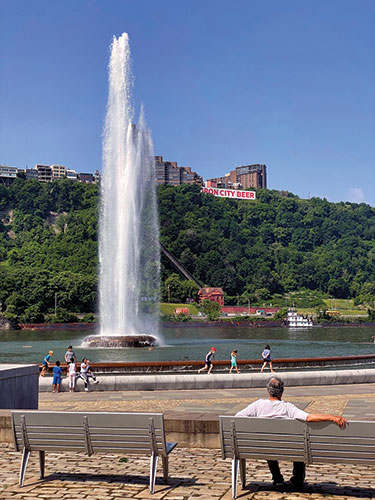 The Point is more than just a fancy fountain. In fact, it’s much more; it’s a chunk of 36 acres, right in the heart of the city’s center, where folks can go for a picnic, organize a friendly game of kickball or sit beneath a tree with a good book — or a good snack. Within easy walking distance, you’ll find public transit lines, multiple cafes and shops, the Fort Pitt Museum and more, all in the shadow of Pittsburgh’s ballpark and football field, sitting pretty just across the water.

Located at the confluence of the Allegheny, Ohio and Monongahela rivers, the park also commemorates the deep history and heritage of the area, dating to the French and Indian War in the mid-1700s and beyond. The discerning guest can easily find monuments, plaques and markers educating the public — often hidden in plain sight.

The park’s so-called Great Lawn, often the site of Frisbee games and sunbathing, is accentuated by a granite outline marking the location of Fort Duquesne. Also in the park is the Fort Pitt Block House, a key British fortification during the French and Indian War. Having survived fires, floods and the city’s rapid industrialization of coal and steel, the 250-year-old Block House may be Pittsburgh’s oldest standing structure — and the nation’s only authenticated pre-Revolutionary War structure west of the Allegheny Mountains.

Cyclists should note that Point State Park is a nexus point of the Three Rivers Heritage Trail, providing access to sections along the Allegheny and Monongahela rivers. But if you aren’t looking to bike, hike or explore Pittsburgh’s history, the Point offers benches and open fields, half in the sun and half shaded by native trees. Stay on the lookout for art, food and cultural festivals, too; many major events call the Point home (even if the Three Rivers Arts Festival decamped the Point this year).

The Point is an urban oasis, a touch of green in the midst of our black, gold and gray concrete jungle. It may not be comparable in scale to the likes of Frick or Schenley parks, but its riverfront access and ample public space offers an accessible and scenic spot to take advantage of a sunny day in the Steel City.

Insider’s Tip
We didn’t think we had to say this, but considering how often this rule is broken… No, you’re not supposed to swim or wade in the fountain.

While You’re Here: Downtown has quite a few stellar restaurants, whether you’re looking for something casual or something more refined. For a quick bite, make your way to Market Square and check out Primanti’s, a Pittsburgh classic, or the Original Oyster House — the city’s oldest restaurant and bar. Journey a bit farther for a more upscale dinner at Eleven Contemporary Kitchen on Smallman Street, right at the edge of the Strip District.

This article appears in the August 2022 issue of Pittsburgh Magazine.
Categories: Places We Love