The Bridge on Forbes in Oakland offers upscale amenities, including co-working spaces, a coffee lounge and a fitness studio. 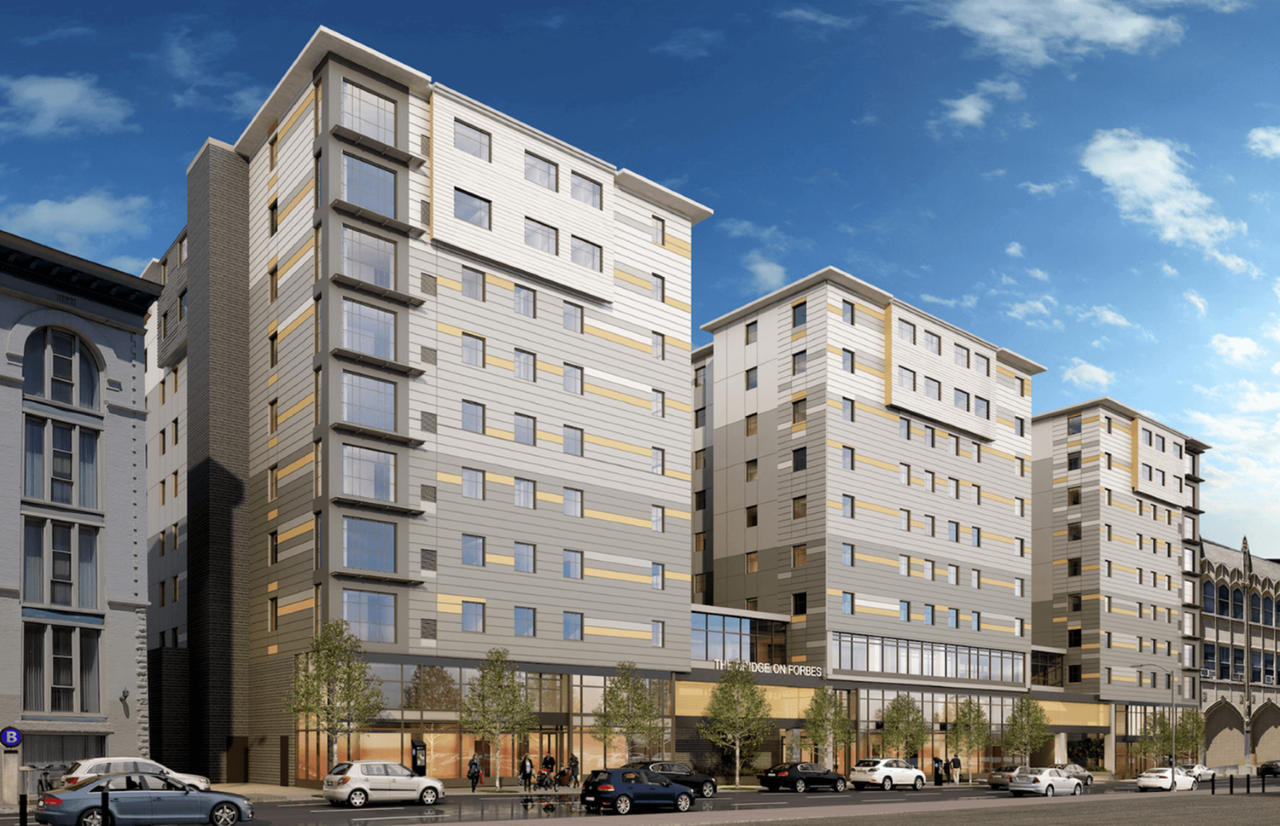 Targeting undergraduates, postgraduates and young professionals alike, The Bridge on Forbes opened in August in Oakland.

The 10-story, upscale apartment complex is located within walking distance of the University of Pittsburgh, Carnegie Mellon University and Carlow University — and it’s a far cry from the traditional dorm rooms.

The pet-friendly Bridge on Forbes houses 197 fully furnished rooms among its studio-, one-, two- and three-bedroom units, that feature — among other amenities — a 50-inch smart TV, a full-size bed and dresser and laundry units.

Some of the other features are a 24-hour fitness center with Peloton cycles, an underground parking garage, an outdoor courtyard with grilling stations and firepits, a coffee bar and both individual and collaborative work spaces.

Designed by Pittsburgh-based Desmone Architects with construction by Rycon, The Bridge on Forbes also allows residents to rent-by-the bed and offers a roomate-matching service.

“The Bridge on Forbes is a great example of thoughtful design and execution to deliver the best living accommodations to students,” says Tyler Perlmutter, chief operating officer at Pinecrest, one of the developers behind the project alongside Cardinal Group Companies. “This is a true collaboration of excellent student housing for students who call Oakland home.”

In February, a committee of school trustees at the University of Pittsburgh authorized a three-year lease for up to 230 students to live in The Bridge on Forbes as part of an ongoing effort to provide more student housing, the Pittsburgh Post-Gazette reports. The lease, which went into effect Aug. 1., totals close to $8.8 million.

Although Pitt will pay around $10,000 per apartment, students will be charged lease rates similar to other Pitt-provided, apartment-style housing options in Oakland, such as Bouquet Gardens, according to The Pitt News.

“The price is comparable to the on-campus rate for apartment-style living. Since these are apartments with full kitchens, students will be charged the on-campus apartment rate,” Pitt spokesman Joe Miksch said.

Monthly lease prices range from $1,005 per per person for a three-bedroom apartment to $1,750 for a one-bedroom apartment, according to The Bridge on Forbes website. The units are fully leased for the 2019-20 school year.