Pittsburgh’s Boutique Hotel Restaurants Are For Locals, Too

Hotel restaurants are tricky operations. The primary mission is to cater to guests staying in the hotel, which means offering an array of meal options for eaters ranging from picky to adventurous — and from those who want a quick meal to those who want to linger over a long lunch. On the other hand, hotel restaurants in Pittsburgh also are following a national trend toward localized, destination dining — at these hotels, management has hired marquee chefs who work with regional farms and offer vibes more specific than “generic hotel restaurant.” Four boutique hotel restaurants stand out among the crowd (and we also appreciate fl.2, the restaurant at the much larger Fairmont Pittsburgh). 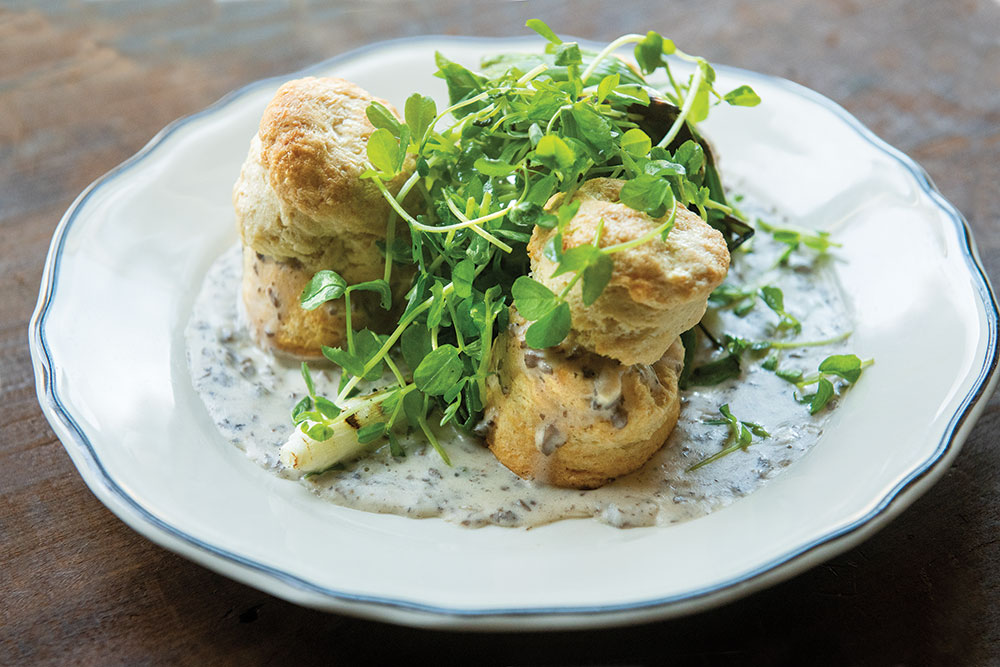 Whitfield ranks as our all-around favorite boutique hotel dining experience due to its ambitious menu, outstanding sourcing and expansive special programming. Executive Chef Bethany Zozula has been with the restaurant from the start; four years in, she displays a confident comfort with her menus. The restaurant’s relationship with legendary lamb ranchers Jamison Farm allows for a weekly delivery of what many consider to be the most beautiful lamb in the country. The steak program, from Jubilee Hilltop Ranch, provides for an outstanding selection of steaks — plus, all the trimmings go into one of Pittsburgh’s top hamburgers. All of this is possible because the restaurant is one of the only places in town that employs an in-house butcher.

Zozula also makes sure her offerings include a good number of vegetable-forward dishes, including a three-course vegetarian tasting menu. Breakfast is quite satisfying, with dishes that range from tasty blueberry pancakes to pastrami hash, and the hotel’s partnership with Stumptown Coffee means you’re going to get a very good brew. The restaurant shines with its unique programming, too. Last year, Zozula’s Sharing Farms dinner series highlighted the region’s top growers, and she often welcomes other top chefs to cook collaborative dinners in the hotel’s gymnasium events space.

The bar at Ace Hotel is one of Pittsburgh’s coolest, with near-nightly entertainment and a very hip scene. There’s a good beer selection, and the house cocktail list doesn’t spin too far from the classics (which we like). And although the bar menu hasn’t changed much over the years, it’s a good one, with the outstanding Whitfield cheeseburger, duck confit with hashbrowns and grilled escarole and French onion dip with salt and vinegar chips among the standouts. 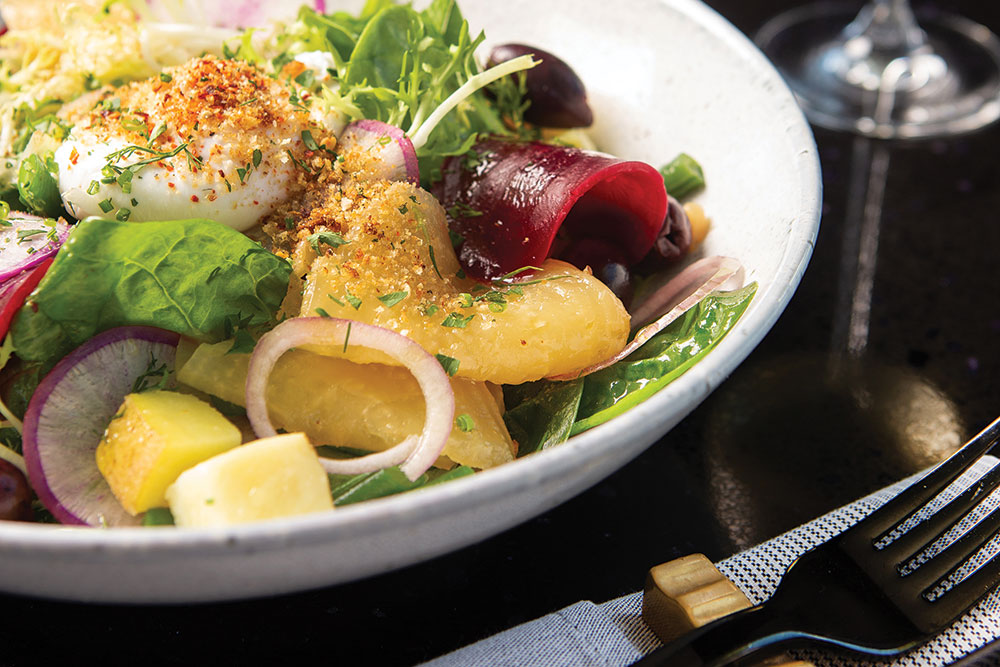 The culinary program at Spirits & Tales is precisely what we look for in a boutique hotel restaurant: It services both the hotel and the city at large. The restaurant’s breakfast ranks among the best in Pittsburgh, particularly for those of us who are looking to start our day with a lighter touch (we love the restaurant’s fresh-pressed juices, too). That’s not to say there isn’t some room for indulgence; Executive Chef Jessica Lewis’ pain perdu, with thick-cut challah, squash-apricot jam, crème fraiche, Riverdale maple syrup and cinnamon pepita crunch, is a treat. Lunch is a perfect spot for business meetings as well as general catch-ups, and Lewis’ vegetable-forward menu offers options such as The Big Green Sandwich that will have you powered up for the rest of the day (plus brasserie favorites such as mussels provencal). Dinner can be romantic, and the expanded menu of small and large plates offers options ranging from familiar steak frites to more adventurous bites such as Coquilles Saint-Jacques. All of it comes with one of the most spectacular views of any restaurant in the city, overlooking landmarks such as Soldiers and Sailors Memorial Hall, Schenley Park and the Schenley Farms Historic District.

In February, we included the bar at Spirits & Tales in our Best Bars in Pittsburgh package as “Best Hotel Bar.” We love the cocktail list and the dimly lit setting; the cocktail program, which includes classics, classic-spins and a customizable option to pick a vodka, gin or whiskey and a fortifying spirit, makes for excellent imbibing. On top of that, Spirits & Tales features one of the better oyster programs in Pittsburgh, which means you can pair a crisp drink with a lovely bivalve. 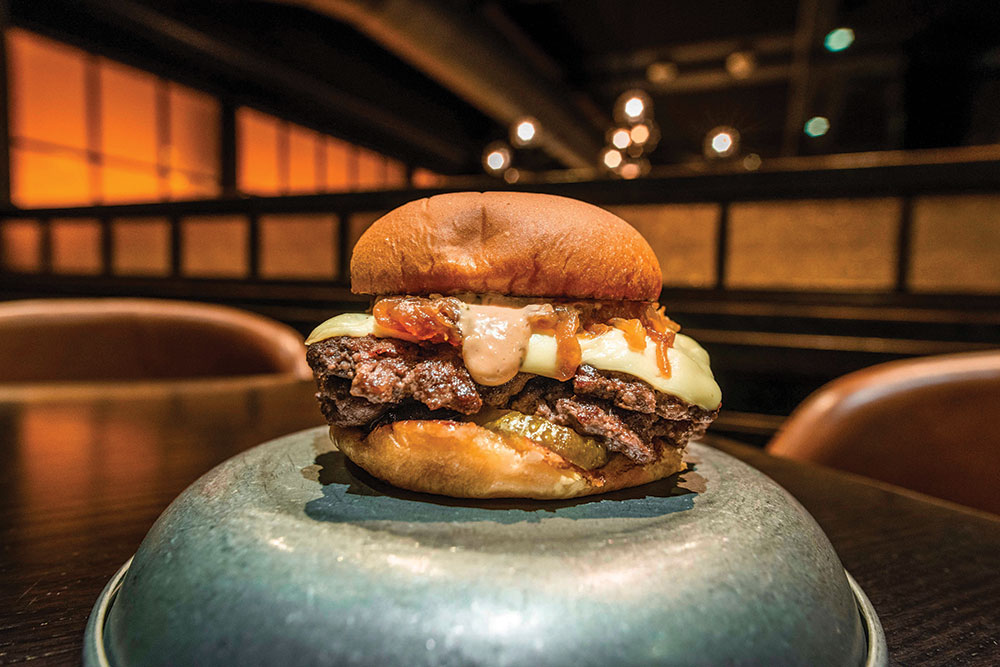 Hotel Monaco’s restaurant, The Commoner, bills itself as a modern American tavern. The restaurant’s kitchen is under the helm of Dave Racicot, a chef best known in Pittsburgh for his work with the Richard DeShantz Restaurant Group (and, prior to that, his modernist cuisine at notion). At The Commoner, Racicot’s menus are informed by his background but mainly keep things restrained, offering a list that resonates with guests and the post-work crowd. Dinner is the go-to here. The burger is billed as “the world’s first perfect cheeseburger”; it’s not, but it is in Pittsburgh’s top tier. Chicken pot pie, bone-in striploin with potatoes and horseradish-crusted salmon are some of the other offerings. The Commoner’s lunch menu tilts heavily toward sandwiches, with a few salads and other offerings thrown into the mix. There is a weekend brunch, where pierogi and eggs make an appearance alongside frittatas and fruit plates; the daily breakfast includes buttermilk pancakes and “Yinz’ Need Breakfast” (which, basically, is your standard American breakfast). Alex Dando runs the bar program. The robust drinks list features items that are expensive compared to other bars around town (and have silly names), but they’re quite good, as are his spirit-free cocktails. The beer list, particularly the bottles and cans list, is outstandingly curated.

Biergarten, the rooftop bar with a focus on European beer and tasty snacks, is open during the warmer months; it’s a terrific place to escape the hustle of Downtown energy. This year, Racicot will add some signature snack items and Dando’s festive summer cocktails are back. 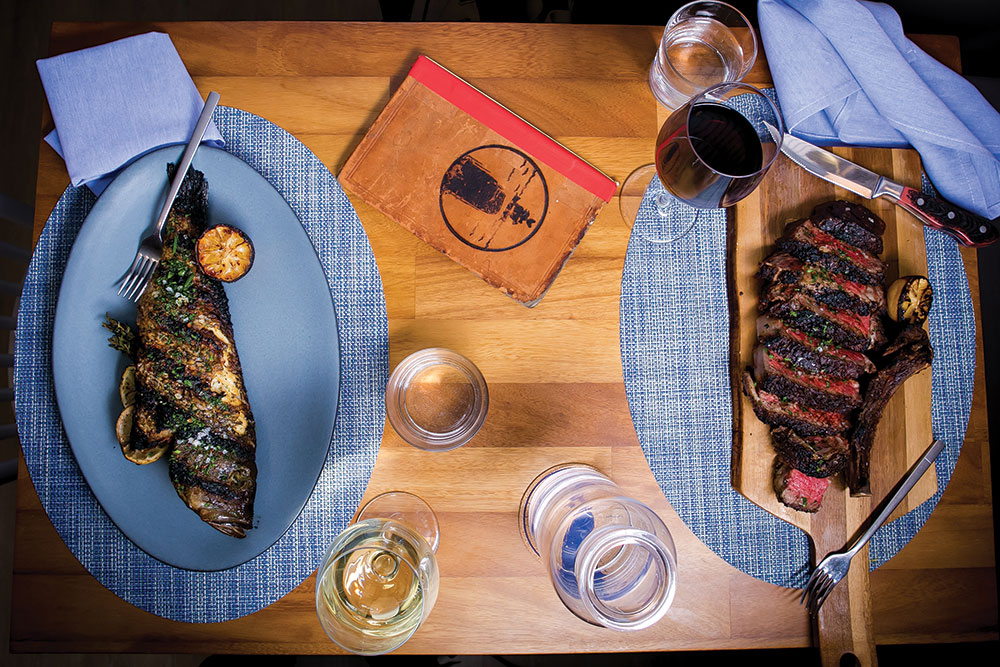 Distrikt Hotel Pittsburgh:  or, The Whale & The Boulevard Lounge

The dining options at the Distrikt Hotel are a bit more limited than Pittsburgh’s other boutique hotels, but it still is worthwhile as a destination. Executive Chef Jon Sterrett runs the or, The Whale kitchen, which is centered around a wood-fired hearth. From the flames come smoky steaks and chops, fire-roasted chicken and whole grilled fish with charred lemon and scallion. There are several tasty dishes; mussels prepared with the classic combination of white wine, shallots, garlic and fennel meant for sharing is a standout. Saturday and Sunday call for weekend brunch in the two-level dining room. Sterrett’s weekend menu includes dishes such as shakshuka, steak and eggs, crab cake sandwich and smoked beet salad. Whale offers a solid cocktail program, and the restaurant’s bar is one of Pittsburgh’s better-hidden getaways.

The hotel also offers weekday lunch in its second-floor bar, The Boulevard Lounge. Some highlights of the condensed daytime menu are a crispy chicken sandwich, Korean steak salad and a soup of the day. The Boulevard Lounge’s cocktail program is quite strong, pulling tiki, contemporary and classic influences into the signature drinks.

This article appears in the April 2020 issue of Pittsburgh Magazine.
Categories: City Guide