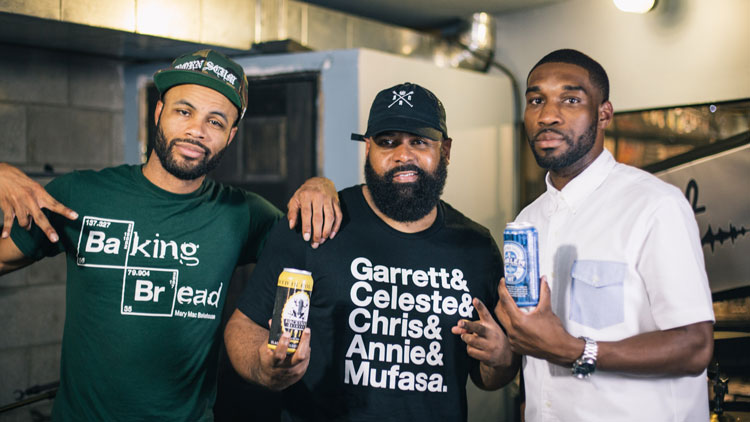 When thinking about different professions, stereotypes of what a typical worker looks like often come to mind. Professors: older, tweed jacket wearing intellectuals. Journalists: scruffy, slightly haphazard introverts chasing their next scoop. Brewers: bearded white dudes in their mid-thirties who wear plaid and wax poetic about IPAs. There’s nothing inherently wrong with these images but they portray only a narrow view of what the world looks like.

Mike Potter, Day Bracey and Ed Bailey have a passion for craft beer, whether it’s tasting a new brew, producing a beer podcast or running a publication dedicated to Black beer culture. They have something else in common, too — the three spent years being some of the only people of color they see when they walk into a brewery. Potter, Bracey and Bailey want to see more diversity and idea exchange in the beer community and so on August 11, the three men will launch Fresh Fest, the nation’s first festival that focuses on Black brewers.

The idea for the festival began with Day Bracey and Ed Bailey of Drinking Partners Podcast and Mike Potter of Black Brew Culture online magazine were talking about ways to bring more people of color into the beer community. “We were asking ourselves how we could use our platforms to create an environment of inclusivity with the black community and giving them a space to come in and feel safe [exploring the brewing community]. We wanted to create a conversation and that’s what this is,” says Bracey.

Since January, co-founders Bracey and Potter with help from Bailey have signed on 12 Black-owned breweries (as well as spirits company Rams & Parrots Whiskey) for Fresh Fest. One of the breweries, Cajun Fire from New Orleans was just featured on an episode of Vice’s Beerland. “It’s one thing to talk to someone who’s doing it. It’s another thing to see someone who looks like you doing it. That representation is so important,” says Bracey.

21 breweries from the Pittsburgh region, such as Brew Gentlemen, Full Pint Brewing Company and Bloom Brew, also will be on site to support the event. Bracey and Potter says that they received a lot of support from the Pittsburgh brewing community from the beginning with everything from bringing beer to collaborating on brews and infrastructure.

Many of the local breweries are also participating in collaborations with Black community leaders and artists. Pairings include Hitchhiker Brewery and creative space BOOM Concepts of Garfield; Mayor of Wilkinsburg Marita Garrett and Hop Farm Brewery; 1HOOD Media and Apis Meadery and more. Each collaboration will produce a one of a kind beer for the festival. “We wanted to ask the brewers for a collaboration because we wanted them to invest in the community. That way they’re actually having a conversations, not just showing up with beer,” says Bracey.

The festival will be held at Nova Place in the Allegheny Commons.

Potter, Bracey and Bailey hope that this will only be the first of many Fresh Fests. “This is all about access, representation, education and conversation. This is the first step in creating a conversation and a safe place [in beer culture] for Black people in Pittsburgh and hopefully the country. You have to start where you are,” says Bracey.

Tickets, which are $49.25 – 94.25, and more information on the festival, is on freshfestbeerfest.com
UPDATE: There was a location change for Fresh Fest. Please note that the festival now will take place at Nova Place rather than Threadbare Cider House, as was originally reported.