Pittsburgh Restaurant Review: fl.2 Is a Level Up 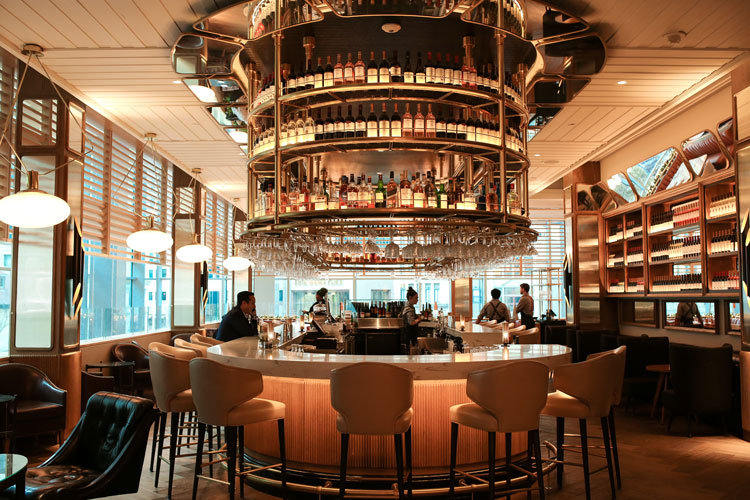 Dining at one of Downtown’s hotel restaurants generally means visiting faded memories of past glory or hit-or-miss hip. fl.2, the restaurant named for its location on the second floor of Fairmont Pittsburgh, aims to restore some glamour to hotel dining. It has to cater to the luxury and business travelers who stay at the swish lodgings, where rooms start at $229 and sometimes exceed $500 per night, as well as Pittsburgh power lunchers, while at the same time feel welcoming to those travelers or locals who simply want a relaxed meal. The restaurant mainly manages to hit all the right notes thanks to its stunning, smart design, which is detailed down to the Kelly Lane custom-designed host uniforms and the plateware by local ceramics artist Reiko Yamamoto, and the often impressive and sometimes dazzling menu of Executive Chef Julio Peraza.

A pre-opening chef shakeup left the restaurant listless for its first few months; when the dust settled, Peraza was named fl.2’s chef de cuisine and later its executive chef. Although Peraza has flown somewhat under the radar, you ought to get familiar with him; the chef brings a high level of pedigree to Pittsburgh. Peraza and his mother fled the civil war in their native El Salvador when he was 8 and settled in Orange County, Calif. Following culinary school in San Francisco, he worked in and later led some of the most prestigious kitchens in San Francisco, Las Vegas and Los Angeles under notable chefs such as Gary Danko, Michael Mina and David Myers and spent time running big-name hotel restaurants in Dallas and Florida prior to landing in Pittsburgh. 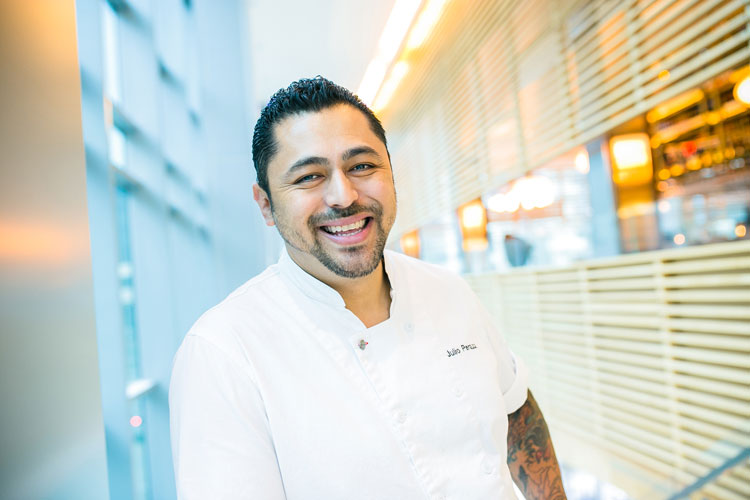 At fl.2, Peraza’s strong culinary voice is run through corporate editing. His dinner menu, for example, ranges from scallop crudo floating on vivid aji amarillo to hamburger with American cheese and secret sauce. Most of the time this works, but sometimes it results in pitfall dishes such as striploin, meant to appeal in name to conservative diners yet delivered on the plate like a modernist painting; traditionalists won’t appreciate the fu-fu design, and gastronomes will feel the dry steak misses the mark.

The restaurant’s mid-century-meets-modernist design is a triumph for Spanish architect Lázaro Rosa-Violán who had assistance from Pittsburgh-based mossArchitects to create Pittsburgh’s most stunning dining space built in the past few years. Warm natural wood and gilded metal frame the L-shaped room, which is smartly sectioned into three zones. A spectacular, elegantly curved, brass-canopy-capped marble bar looks like something befitting a gilded scene in an F. Scott Fitzgerald novel. You’ll want to stick to cocktails from that era, too; the bespoke list veers too sweet for my taste. 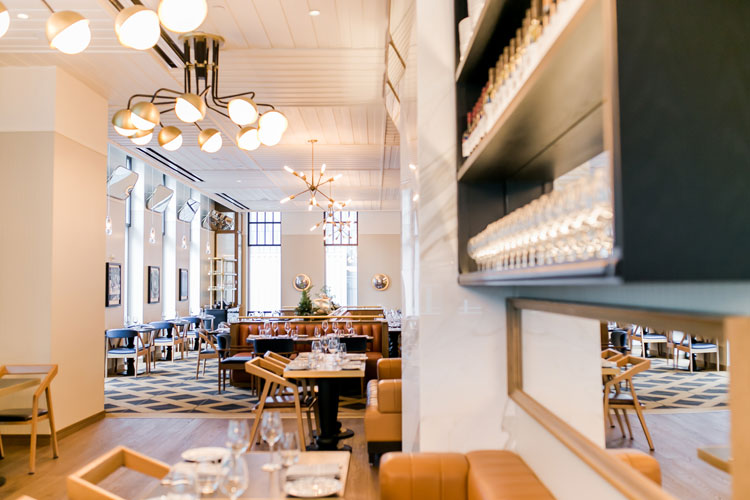 A transitional middle space with polished wood flooring, soft lighting and good views of Downtown is perfect for a power lunch or an evening snack by the cozy fireplace. Despite the enjoyable people watching, I found lunch to be the least consistent and exciting time to visit fl.2, even though its menu had one of my favorite dishes: the poblano soup.

A touch creamy and frothy, the soup resounds with the essence of roasted pepper, speaking to Peraza's roots. It was one of a just a few dishes that felt really special, and an indication to me that fl.2 would be even more of a draw than it already is if Peraza’s voice spoke more loudly on the menu. I would have been happier if another lunch dish, a lamb gyro wrap, wasn’t deconstructed like a painter’s palette — but once I added the sesame yogurt and pickled vegetables to the lush slivers of Jamison lamb shank, the pleasantly fresh pita was stuffed with an indulgent bite. The accompanying matchstick fries were so crisp and peppy they made me forget, for a moment, that matchsticks are, at best, the fourth-ranking style of French fry. 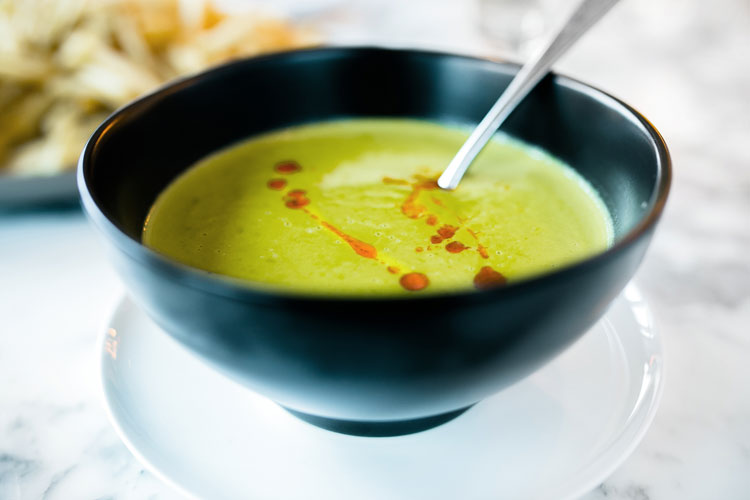 The main dining room abuts an open kitchen, with diners seated in low-slung banquettes and tables. The restaurant is subtly sectioned further via a variety of stylish, wicked comfortable chairs. It’s in this room where you’ll want to have breakfast and dinner.

Eating breakfast at fl.2 made me wish I thought to eat breakfast at a hotel restaurant more often. I felt like I was on hiatus from the regular, rushed morning while I relaxed in the main, sun-kissed dining area. The restaurant’s breakfast menu has all the omelet and pancake standards you’d expect from hotel breakfast, but, while sipping on a zippy Sunbeam (pressed golden beet, carrot, Granny Smith apple juices), I decided to go health-spa style. Coconut chia parfait, tasty and visually stunning with layers of bright-orange mango, black and white chia seeds and tawny granola, also has a mucousy mouthfeel (as it should be from the chia, but distracting nevertheless). Avocado toast, highway robbery at $15 in an otherwise fair-priced hotel restaurant, could use a bit of rethinking, particularly with the Danish sprouted-rye bread, which was as tough as an avocado pit. The avocado itself was nicely ripened, and I always appreciate a perfectly poached egg, which came on top of the toast. Despite some imperfections, I left breakfast feeling stronger and more relaxed than when I came in, and that was exactly what I was looking for. 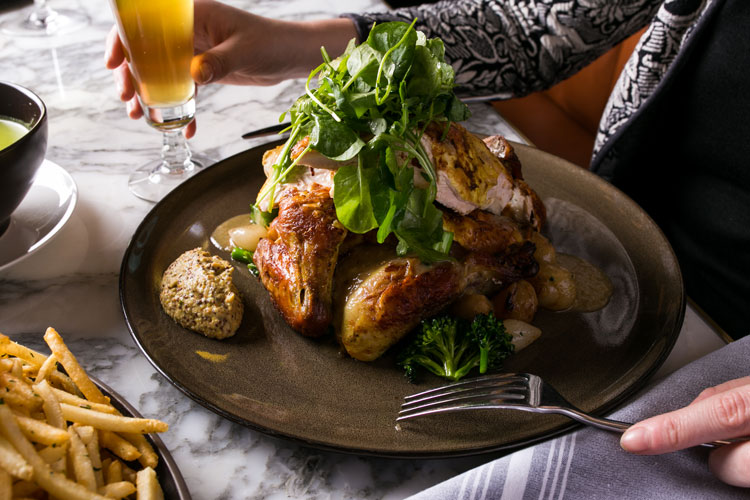 The best thing you can do for dinner is order a whole rotisserie chicken. It’s a signature dish that elevates a family style, comfort-food dish to something that’s worthwhile to put front-and-center on an upscale restaurant menu while at the same time not veering too far from a classic interpretation. There’s an understated elegance in a simple meal prepared properly, and this bird with crispy skin, juicy breasts, yummy wings and succulent, melty legs and thighs is just that. The gravy might be a little dull on its own; mix in a bit of the accompanying mustard and it gets all the pep it needs. Its accouterment of potatoes, cippolini onions and broccolini, cooked in a basket underneath the chicken and seasoned with its drippings, is precisely what should be served with it. If you’re on the road and looking for a bit of comfort to soften the blow of travel, this is your dish; if you live in Pittsburgh and are having a night where you want someone to take care of you, this also is your dish. Roasted chicken is having a moment in Pittsburgh — Peraza’s bird currently sits atop the coop.

If it’s available, start your meal with kampachi, a nod to Peraza’s West Coast training. Sleek slivers of icy amberjack are brushed with barrel-aged soy sauce and given a lift from yuzu and sesame. Sticking to the sea, mussels, perfectly steamed in garlic, pale ale and herbs and dusted with breadcrumbs, are a terrific option for a shared starter or a bar snack.

fl.2’s roasted cauliflower is celebration vegetarian food, the prince of the party. Peraza deconstructs an entire head of it, teasing florets, spine, stem and leaves into crisp, indulgent texture. The crunchy puffed quinoa is a nice touch, as are the streams of zippy labneh. An array of verdant herbs add visual contrast and background flavor while not conflicting with the other flavors in this well-tested dish. 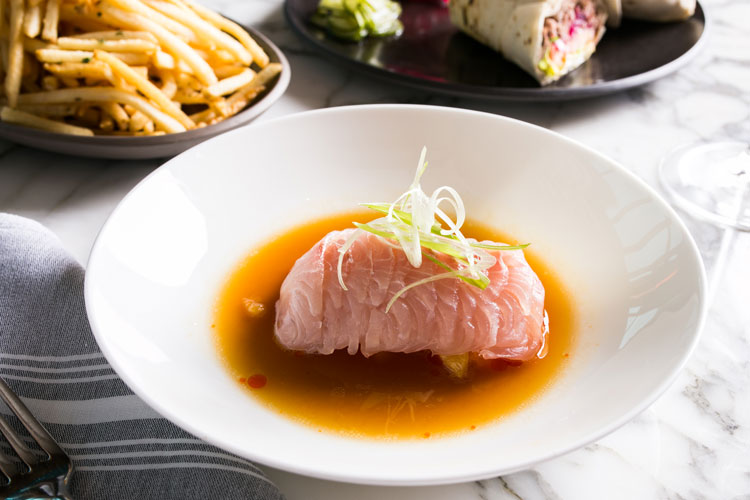 Tread carefully, though, as there are snags on fl.2’s various menus, such as a disharmonious octopus dish featuring murky lentils and mushy tentacles that a friend described as “tasting like I'm eating something else that looks like an octopus.” Ratatouille is similarly bewildering in its construction. I appreciated the planks of smoky eggplant but otherwise found the dish a confusing mush that was overwhelmingly tomato-pasty, and, topped with grated cheese, felt like a pasta dish in search of pasta rather than a beautiful celebration of early autumn vegetables. And eating a sad chicken salad during lunch made me wonder if someone had pulled a quick one on a room service delivery and, after passing the dish through a trough of mustard dressing, sent it to our table instead. There wasn’t much chicken on the plate, and what was there felt like it had been sitting on the bottom of the fridge next to whatever cheerless bag they pulled the pre-cut greens mix from.

Despite those missteps, I’m glad for a Downtown hotel restaurant that shines both in style and substance. We’re lucky as a city to have Peraza helming this ship, and I hope Xenia Hotels & Resorts, Inc., a Florida-based hotel conglomerate that purchased Fairmont Pittsburgh in September, will allow him to further assert his culinary perspective. With strong vision and the opportunity to train a large staff, he has the potential to become one of the city’s foundational figures for the next generation as well as a voice for the current one.

This article appears in the January 2019 issue of Pittsburgh Magazine.
Categories: From the Magazine, Restaurant Reviews