The sixth standalone concept from the Richard DeShantz Restaurant Group, is DeShantz’s most exciting restaurant yet. 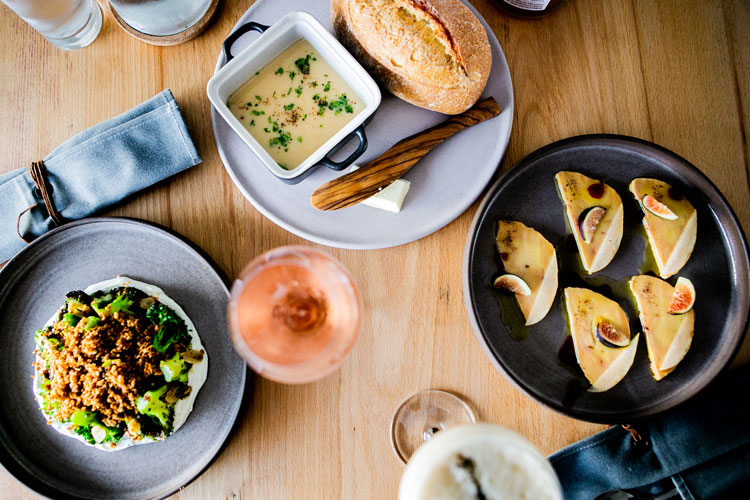 Richard DeShantz and Tolga Sevdik are building a restaurant empire in Pittsburgh at a breakneck pace, and they’re getting stronger with each opening. The first four Downtown spaces from The Richard DeShantz Restaurant Group combined a culinary theme (tacos, barbeque, etc.) with a focus on a specific spirit, such as tequila or bourbon. With the French bistro Poulet Bleu, which opened a year ago, they departed Downtown for Lawrenceville and sharpened the focus on food and service.

Their latest restaurant, Fish nor Fowl, opened in Garfield in August. It is their most ambitious and forward-thinking project yet and one that’s worth visiting.

DeShantz designed the space, leaving a few echoes of its former occupant, Salt of the Earth. What once was a floor-to-ceiling grey slate wall where the menu was written in chalk now is a verdant, three-dimensional living wall popping with hues of green; the kitchen still is visible but the countertop seating is gone; the restaurant-length tables remain but have chairs set for groups of two and four rather than communal benches. 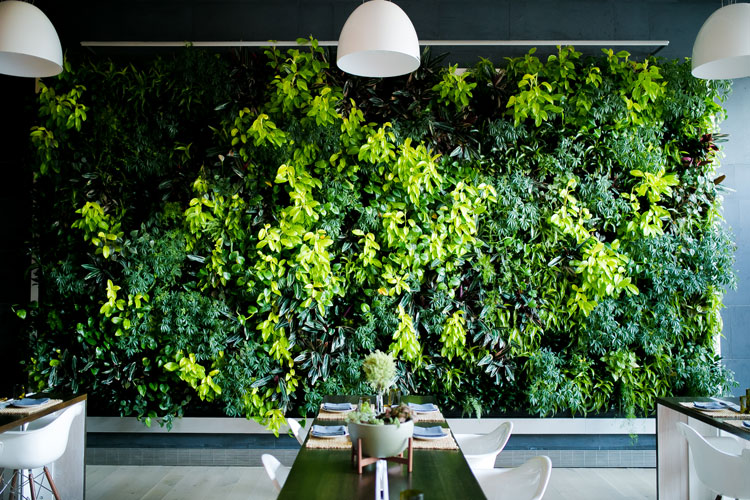 That’s where the echoes end. The space — a two-for-one, really — is distinctly a DeShantz vision. The downstairs feels like a party with its high ceilings, long tables, the living wall and a lively back bar that fosters an open flow of energy. Upstairs is where DeShantz really leaves his mark. At Salt you felt like an afterthought sitting on the second floor; DeShantz has turned it into a highly stylized yet comfortable space with real and faux fur blankets draped over white-washed woods. There are cozy nooks perfect for a rendezvous, a big table fit for a feast and a second, glass-enclosed bar that overlooks the downstairs dining room. My only quibble is the ceiling, where the unpainted soundproofing tiles look a little too raw in an otherwise detailed space.

At least that soundproofing works — while almost every new restaurant in Pittsburgh is impossibly loud, at Fish it’s possible to have quiet or boisterous conversations without being bothered or bothering anybody else in the restaurant. Prince, Michael Jackson, Hall and Oates and others play on an upbeat soundtrack that enhances the vibe without being overbearing.

Credit general manager Maggie Meskey — who once was a fixture as Salt's bar manager and now is one of Pittsburgh’s most highly regarded front-of-house operatives — for adding to the enjoyment of the restaurant, too. She has trained and now oversees an ace staff that balances the coolness of the space with friendly, smooth service. 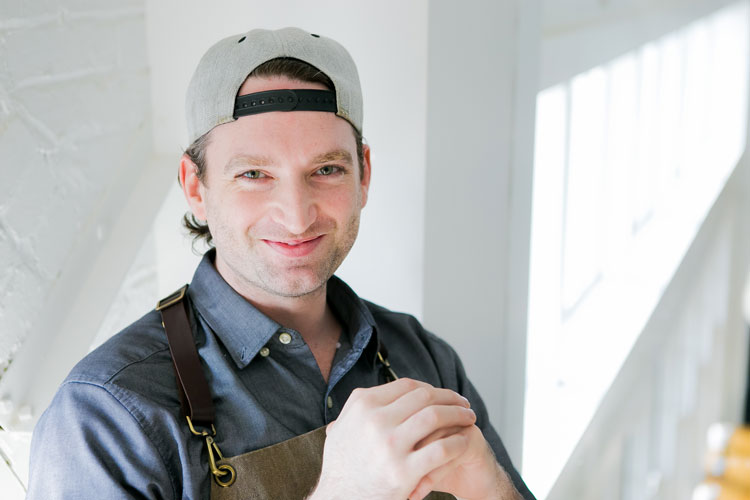 Dan Carlton is Fish nor Fowl’s executive chef/partner. He’s a longtime DeShantz collaborator who ran the kitchen at Butcher and the Rye for six years prior to moving to Fish; Carlton also worked at Cure and Nine on Nine. It’s worth noting that he is the first person in the restaurant group other than DeShantz to be named executive chef of one of the group’s establishments.

Carlton opened the restaurant with a hodgepodge, hard-to-categorize (“it’s neither fish nor fowl”) menu of modern American cuisine. With the dishes divided into “water,” “field” and “farm,” the series of shared plates was a bit too conceptual for its own good. Diners were never quite sure how to assemble a complete meal as the price was somewhat an indication of portion size but not really, and the categories were too loose to know exactly how to put things together. A lengthy cocktail menu was meant to pair with the dishes, but that proved to be a challenge as most of us would rather pair wine or beer with our meals if we’re drinking. Plus, it was hard for the bartenders to keep prepped for nearly 20 complex cocktails.

I respect that they were quick to change what was an interesting but not user-friendly idea for something that works much better. The current format — organized as “Small,” “Garden” and “Large” — features an array of contemporary dishes with a tilt toward idiosyncratic (though not boundary-pushing) ingredients. 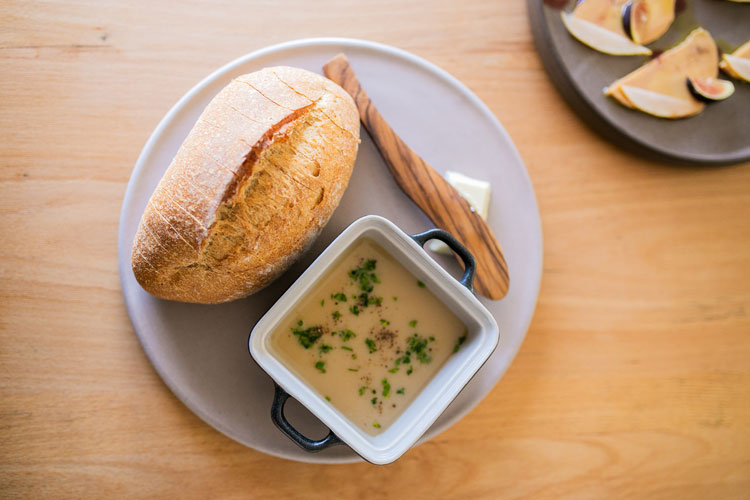 Start your meal with warm sourdough bread served with pan drippings and cultured butter, a big hit on several of my visits. It’s a lovely little loaf of bread that’s just the right size for two or three people. The pan drippings are savory as a Sunday roast's gravy, while the room-temperature butter has a lovely tang on the back-end.

The bread also can be used to lap up the sauce of complex, pasta-based dishes, such as agnolotti with white bean filling, green tomato and parmesan brodo, garlic scapes and espelette pepper or farfalle with uni, baby corn, chervil and lime; both of these shareable plates feel like complete bites. Thin slices of cured foie gras seasoned with miso, husk cherry, vanilla oil and long pepper, presented dotted, dashed and drawn as if it were an artist’s palette, is a silky, funky and slightly sweet must-get from the “Small” section, too.

The “Garden” dishes largely are quite strong. I wish a dish called “squash” were called “cheese” as the hunk of Goat Rodeo chickabiddy takes center stage on a plate of squash, beets and figs, but no matter what you call it, it’s a tasty plate that allows diners to explore a variety of flavor and texture combinations. In another dish, broccoli is charred on the outside but still retains some of its snap, with smoked goat cheese adding contrast, chili flakes a touch of heat and pan fritto some crunch. Only one dish didn’t work at all — a plate of artichokes had too many components, and the combination of eggplant, golden raisins, pickled oranges and parsley wasn’t cohesive. 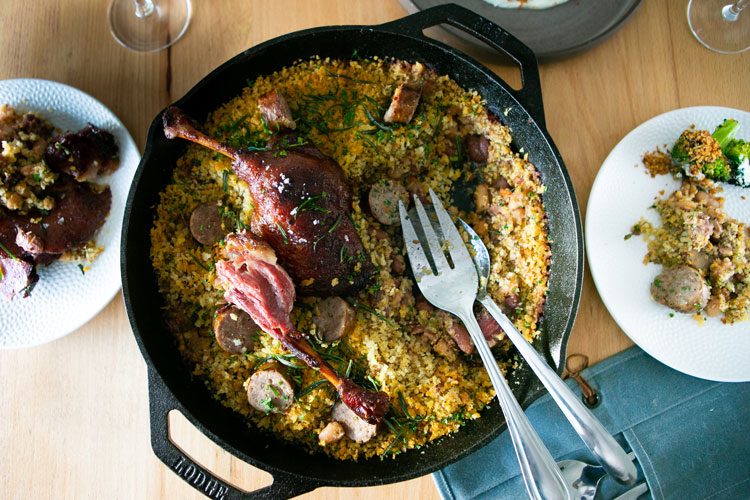 My favorite “Large” courses are the ones that focus on game or less-common cuts of meat. Halibut collar, a bone-in, rich hunk of meat found under the fish’s gills, is firm, succulent and enhanced with the lemon and butter served with it. A thin-cut Hudson Valley duck breast presented like a fan and accompanied by sweet grilled apples and bitter endive is an excellent dish for a chilly evening. Cassoulet, with plump, tender beans, luscious pork cheeks and belly, meaty (if a tad over-cooked) duck legs and crisp breadcrumbs, is a satisfying way to share a dish with some friends. I do wish it had been prepared all together rather than assembled from components as it would have allowed the individual flavors to blend more harmoniously. As we get deeper into winter, Carlton might want to think about adding more stews and casseroles to the menu; they fit the vibe here, particularly in the upstairs room. 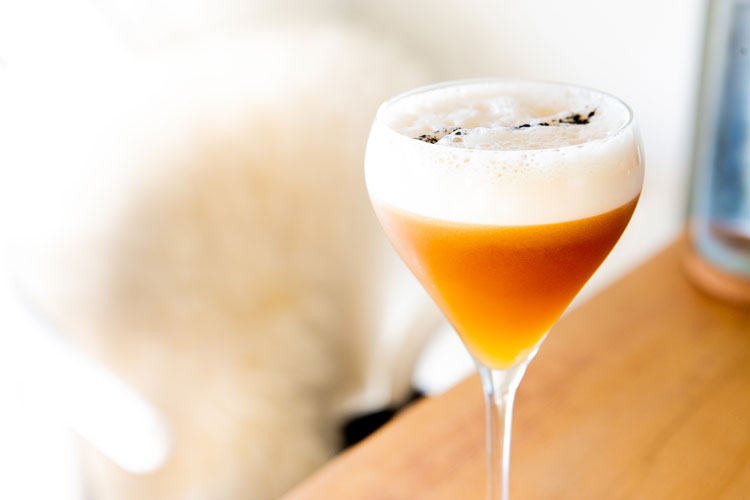 Fish nor Fowl is one of my favorite restaurant openings of last year, and one that I suggest you pay attention to. Between Carlton’s leadership of the culinary team, which includes the talented young chef Ryan Peters, and Meskey overseeing a strong front-of-house staff, this feels to me like a restaurant that’s going to keep swinging upward for the foreseeable future.

This article appears in the February 2019 issue of Pittsburgh Magazine.
Categories: From the Magazine, Hot Reads, Restaurant Reviews