The popular Strip District eatery is set to expand with a to-go pizza counter. 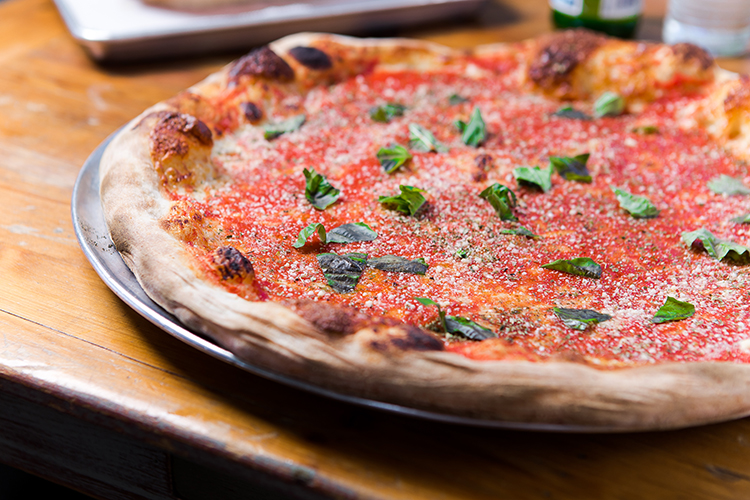 In 2005, DiAnoia’s Eatery executive chef/co-owner Dave Anoia picked up a gig as a pizza maker at Three Brothers Italian Restaurant in Ocean City, Md. He dropped the craft in 2007 when he moved to Pittsburgh to work at Steelhead Grill and Spoon, but never lost the itch to make a perfect pie. So when he and his wife Aimee DiAndrea opened DiAnoia’s in 2016, he added an old-world style pizza pie to the menu.

The pizzas proved so popular that Anoia decided to limit the hours they were offered — to daytime dine-in during the week and on Saturdays, and take-out-only on Tuesday, Wednesday and Thursday evenings.

So when Anoia and DiAndrea were thinking about expanding their business, pizza seemed a natural fit. “We had 800 square feet in the back of DiAnoia’s that we were using as storage. So why not put that stuff in a storage unit and turn the space into a pizza and catering kitchen?” Anoia says.

And why not add a couple of stairs, carve out a 5-foot take-out window on the 26th Street side of the building and call it Pizzeria Davide?

Anoia says the pizza served at Pizzeria Davide will be made using the same process it currently is at DiAnoia’s: Molino Pasini 00 pizza flour, imported from Italy, is mixed with dry yeast, olive oil, salt, a pinch of sugar and water. It is bulk-fermented for 24 hours and then rolled into balls and fermented for an additional 24 hours before being baked on the third day. There will be two sizes offered at Pizzeria Davide — 12 and 20 inches.

“We’re incorporating a lot of what you’d find at a New York style pizzeria,” he says.

To that end, Anoia says that he’ll serve three basic pizzas (old world, marinara, margarita) as well as a number of speciality pizzas (cacio e pepe; provolone and broccoli; truffled ricotta and pistachio; and Lebanon sweet bologna and pepper relish are among the potential offerings), plus cheese and pepperoni slices. He also will have salads and appetizers such as garlic knots, panzerottis and what he’s calling a “meatball bomb,” which is a meatball wrapped in provolone and dough, baked and served with marinara.

He’s looking to another east coast city for the single sandwich he plans on selling — a Philadelphia cheesesteak. That sandwich will be served in the traditional style with fried onions and Cheese Whiz, as well as hoagie style with onions and Whiz plus lettuce, tomato and pepper relish mayo.

Pizzeria Davide is expected to open at the end of March or beginning of April. It’ll be open from 11 a.m. to 9 p.m. Tuesday through Sunday for take-out only (Anoia says he might add some picnic tables down the road) and delivery through apps such as GrubHub and UberEats.