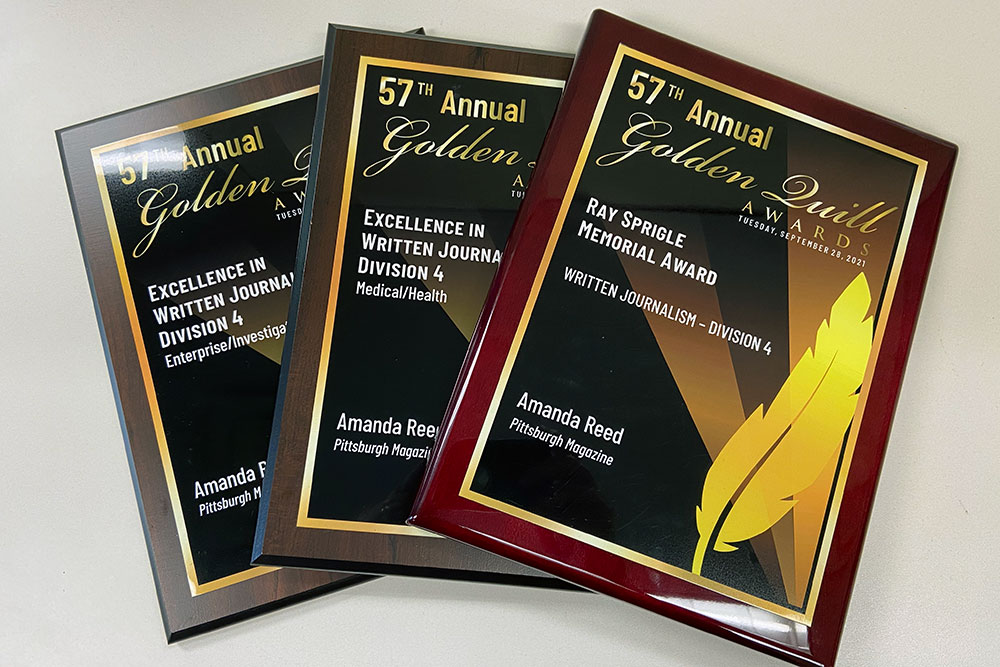 Famed broadcaster Walter Cronkite once said, “Journalism is what we need to make democracy work.” It’s a quote that appears on page one of the program for the 57th annual Golden Quill Awards, held Tuesday at the Rivers Casino Event Center, where prizes were presented to journalists whose work did exactly that.

Among them were three Pittsburgh Magazine contributors.

The biggest news was Amanda Reed’s September. 2020 story about stressed-out college counseling centers during the pandemic, which swept the ceremony.

The judges said this was an engaging, detailed story with excellent reporting and writing. “Longer stories sometimes feel exhausting, but this one never did.”

The prize is named for the Post-Gazette journalist who won a Pulitzer Prize in 1938 for his reporting that Alabama Senator Hugo Black, newly appointed to the U.S. Supreme Court, had been a member of the Ku Klux Klan.

According to Pittsburgh Magazine Publisher Betsy Benson, the award is a boon to the College & Universities special issue in which Reed’s article first appeared.

“We’re so proud that Amanda’s excellent reporting in the story was recognized by the Western Pennsylvania Press Club this year,” Benson said. “It is a good reminder that Pittsburgh Magazine provides important and trusted content to our community in its September issue and all year long.”

Among other Pittsburgh Magazine winners:

Freelancer Mark Houser won in the Spot/Breaking News — Written Journalism, Division 4 category for his National Negro Opera Company story, “Preserving Pittsburgh: The Birthplace of the National Negro Opera Company Could Be the Latest Historical Gem to be Spared the Wrecking Ball.” The judges found this to be an “interesting look at a historic property with deep roots in the community. Great job getting the news quickly.”

Cristina Rouvalis, also a freelancer, won in the News Feature-Written Journalism category for Division 4, with her Prevention Point Pittsburgh piece, “Harm Reduction: As the Pandemic Grips the Region, Prevent Point Pittsburgh Faces a Huge Increase in Demand for its Needle Access Program.” The judges wrote “This story provides an exceptionally interesting look at how Covid-19 has impacted the demand for needles in Pittsburgh. The story is unique, captivating and has statistics and voices that make it sing.”

The awards are sponsored by the Press Club of Western Pennsylvania.