How Prevention Point Works to Reduce the Harm for Drug Addicts

As the pandemic grips the region, Prevention Point Pittsburgh faces a huge increase in demand for its needle access program. 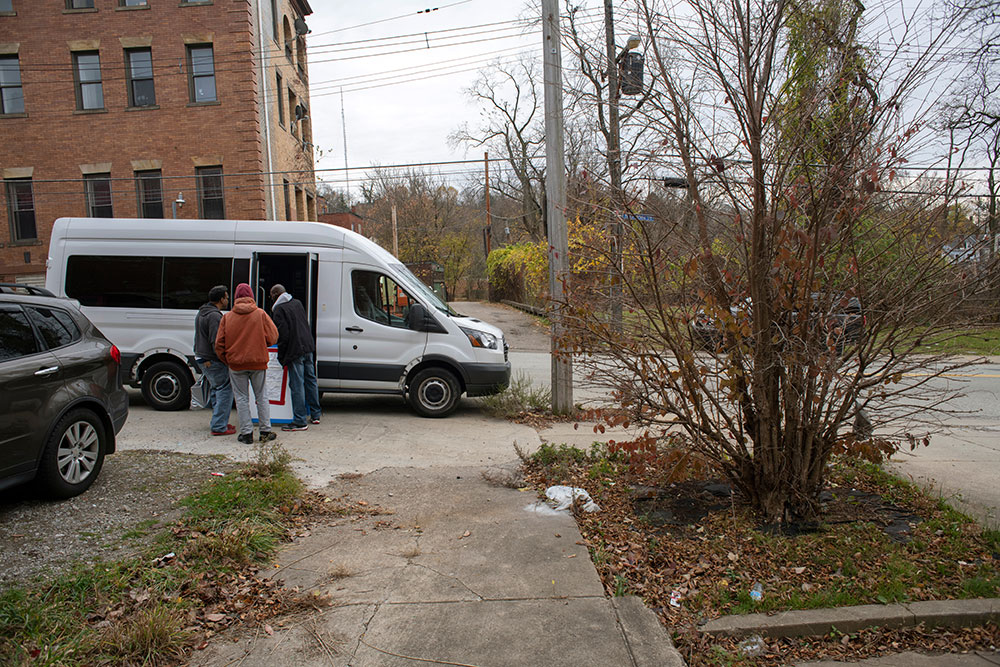 An unmarked white van pulls into a parking lot in Homewood, and it doesn’t take long for a short line of men in their 30s and 40s to form. With masks on their faces and an assortment of beanies and sports caps on their heads, they make playful jabs at each until it’s their turn to go up to the window and order. They’re regulars, and they know the drill.

Instead of tacos or ribs, they ask for needles. Clean ones. Brand-new syringes that will reduce the odds of infection if they shoot up heroin. One of the men waiting in line notices something he has never seen before. “Are those pipes?” he asks, watching the guy ahead of him receive his package. Pipes are a relatively new but hot item — much safer than the car antennas some people use to smoke crack or meth.

In a line that seems to grow every day under the stress of a pandemic, a woman has come for a different reason — to load up on Naloxone, a drug that helps revive people who have overdosed. “For friends,” she says as she also grabs a bus ticket home.

Aaron Arnold, executive director of Prevention Point Pittsburgh, points across Frankstown Avenue to an empty lot, where people go to shoot up heroin. “People will put the Naloxone in the trees. So if someone is using and they pass out, someone else can give it to them.”

By the end of the three-hour shift, the two workers manning the Prevention Point van will have handed out 3,420 syringes and about 150 pipes to 41 people.

“There’s no judgment,” Arnold says. “We just want you to have sterile stuff. We’re your friendly neighborhood needle exchange.” 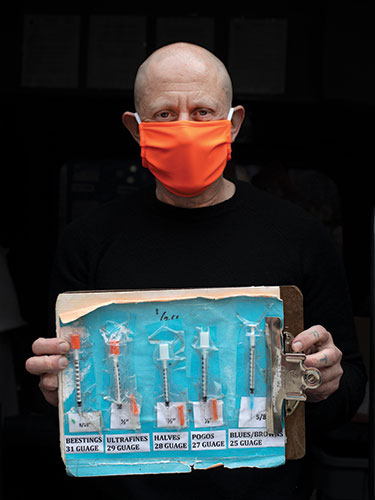 When you think of essential workers, you may think of police and firefighters and nurses. Chances are, the people handing out free needles, pipes, alcohol swabs and other supplies to drug addicts don’t come to mind.

But the nonprofit Prevention Point has also been deemed essential, and there’s been a huge uptick in demand for its harm reduction services during the pandemic. By October of this year, it saw 508 new participants, compared to 266 during all of 2019. By June of this year, it had handed out 4,214 doses of Naloxone, just short of the 5,000-plus distributed throughout last year. The 788,830 syringes it handed out by mid-October already has exceeded the 664,890 syringes handed out during all of 2019.

“We’re on track to distribute a million and some needles this year,” he says.

His philosophy: No questions asked.

“I had somebody pick up 4,000 syringes the other day,” he says. “He was picking up for five other people.”

The staff was happy to provide for the group as it meant not sharing needles, reducing the chances of infections that cause hepatitis, endocarditis or the spread of HIV.

One of only two legally sanctioned syringe services in Pennsylvania, Prevention Point has seen an increased demand for its needle access program. (It no longer requires people to exchange needles to get new ones, because someone could be arrested for carrying the drug paraphernalia on the way to the van).

All five of its weekly stops — Homewood, Perry Hilltop, Hill District, Overbrook and East Liberty — have been busy. The staff also drops off supplies to people who call in and explain they are too vulnerable to leave their houses. Arnold believes the pandemic has brought more people because they have more time to make their way to the van, while others can no longer afford to buy supplies online. The stress of the times also may have caused people to relapse, he says.

Instead of entering the van to chat like they once did, people now interact through the open window. “It’s the ice cream truck model,” he says. No one gives their name, just a two letter-code based on their mother’s name.

He sees more people, even some who come only to pick up 20-pound packages of food provided by the Greater Pittsburgh Community Food Bank or deodorant, toothpaste or hand sanitizer. But most also want supplies such as syringes, pipes, pipe covers or blank credit cards that let them cut cocaine without using their own dirty credit card.

He greets everyone warmly and looks them in the eye. Some people are so grateful that he treats them like human beings that they tear up in gratitude.

“The other day, people brought us snow cones,” he says. “They said, ‘Thank you for what you do for our community.’”

Of course, he also receives the occasional horror-stricken reaction when people walk up and ask him what he is handing out. 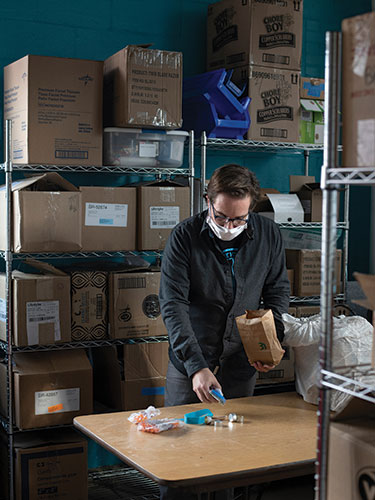 Arnold, 33, has heard it all before — he’s been shouted down by residents who think the needle access service will depress property values, create an uptick in drug use and turn their neighborhoods into a drug den. After some backlash by neighbors in Carrick, the Pittsburgh City Council took a “Will of Council” — a necessary part of the approval process — off its agenda in 2018. Prevention Point couldn’t set up a van in a church parking lot there, even though the community had the highest number of overdose deaths in the region.

The nonprofit opened van service in nearby Overbrook instead, and he says most of the people that come to the van on Thursdays are from Carrick anyway.

To critics who say he enables drug use, Arnold replies. “You know, it’s gonna happen whether or not they have sterile supplies or not, right? I would rather you think about it as allowing somebody to think about their health when they’re doing this thing.

“People make all these assumptions about people who use drugs, that they don’t care about themselves. Nobody’s trying to die from using drugs. You have to push back at people and remind them that everyone deserves to be healthy and safe.”

The cross-section of people who come to the van for supplies defies stereotypes and crosses racial, gender and economic lines. “We have someone who sleeps in the back of the building and then a guy who pulls up in a Mercedes convertible. One of our regulars in the Hill District is a guy who lives in a highrise Downtown. He’s donated to us.”

Not, he adds, in uniform. 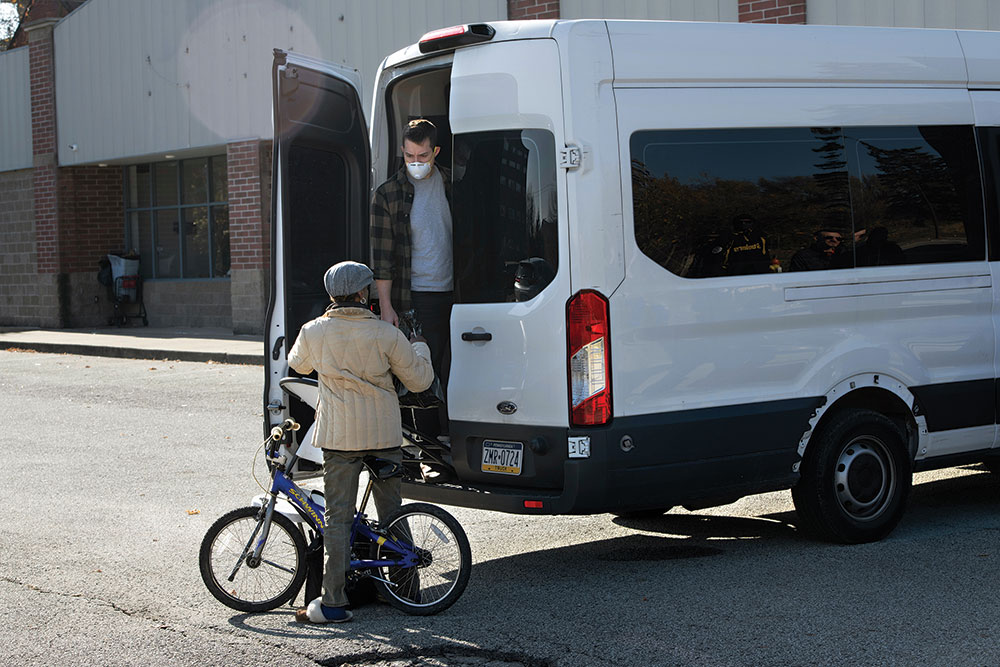 ‘DRUGS HAVE ALWAYS BEEN EVERYWHERE’

As a teenager who grew up in Lebanon, Pennsylvania, Arnold experimented with every drug he could get his hand on — opioids, heroin, you name it. He never became addicted, but his ex-boyfriend did. Their different reactions to the same chemical substances made him realize that addiction wasn’t a matter of weakness or willpower. “It was your brain and how it reacts to the chemicals.”

They would travel to Prevention Point Philadelphia (unrelated to the Pittsburgh nonprofit with a similar name) because that was the only place to get clean needles for his friends.

“I could buy heroin in my high school if I wanted to,” he says. “People were in denial about it. They act like it’s a new problem in the last couple of years and everybody is like, ‘Oh, my God. It’s infiltrating everywhere.’ Drugs have always been everywhere.” 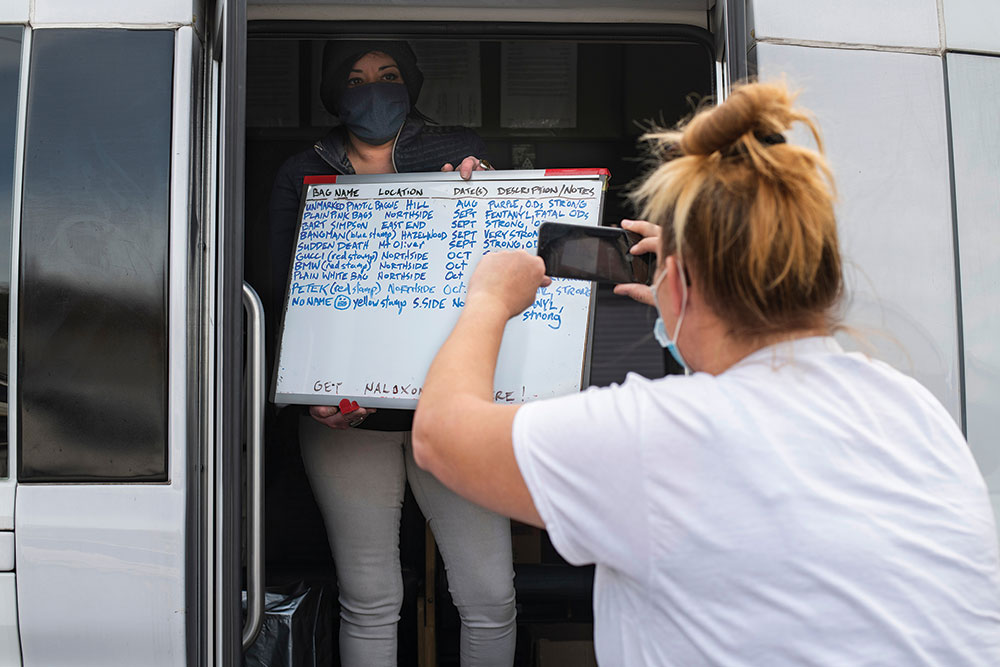 HELEN MATUSICK, A SERVICE NAVIGATOR FOR PREVENTION POINT PITTSBURGH, HOLDS A BOARD LISTING STAMP BAGS CURRENTLY IN CIRCULATION IN THE PITTSBURGH AREA DURING A DISTRIBUTION IN OVERBROOK. PARTICIPANTS COPY AND SHARE THE INFORMATION WITH OTHERS AS A SAFETY MEASURE.

Arnold came to the University of Pittsburgh on a scholarship for LGBT students. In his freshman year, he volunteered at Prevention Point Pittsburgh and eventually became an employee before becoming executive director in 2016.  He has opened up new sites and this fall, teamed up with medical service to help participants with wound, infection and other care.

“Aaron is visionary and is willing to do the hard work to open up a new service and serve and talk about a population that no one else will talk about,” says Mary Phan-Gruber, CEO of the Jefferson Regional Foundation, which has helped fund the nonprofit. “He represents a group that doesn’t have a voice.” By providing people with clean syringes, she says, the group opens up conversations about rehab and other services.

Prevention Point helps its clients connect to services such as food, mental health and rehab. Helen Matusick, the service navigator for the group, has helped many people without insurance get a bed at a state-run facility — often for 28 days but sometimes for up to six months. After multiple calls, she succeeded in placing seven people in rehab during a recent week but says it has become harder during the pandemic. “Beds are full,” she says. 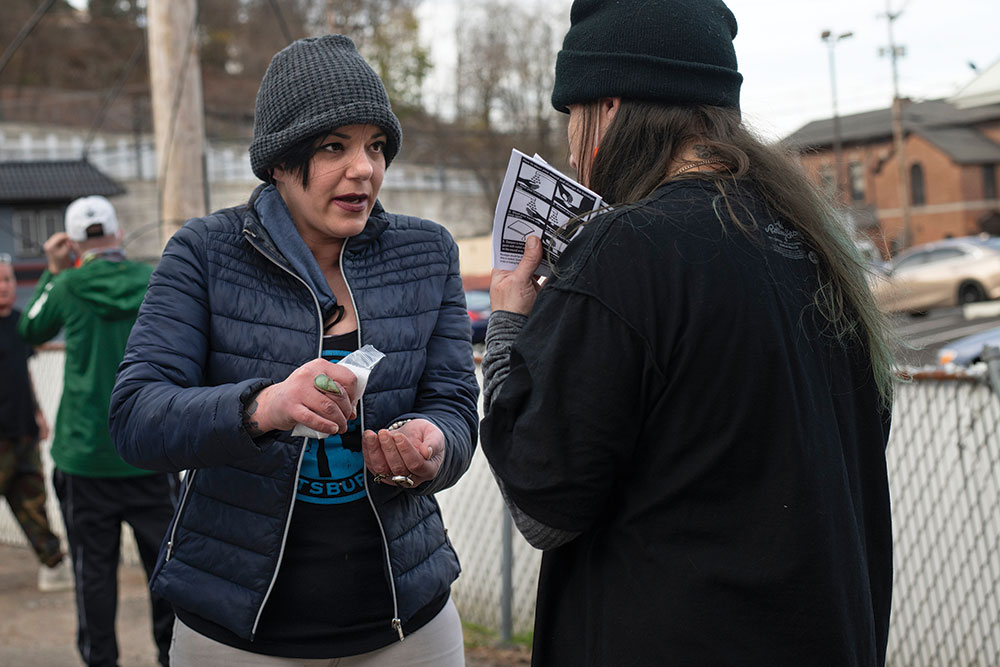 HELEN MATUSICK, A SERVICE NAVIGATOR FOR PREVENTION POINT PITTSBURGH, EXPLAINS TO A PROGRAM PARTICIPANT IN OVERBROOK HOW TO USE EPSOM SALTS TO HEAL AN ABSCESS.

Even after successful rehab, many are finding their plans to re-enter society derailed by the pandemic. “Three-quarter houses are not taking new people. Some people go back to using,” Matusick says. She helped a 28-year-old woman get into rehab, but with nowhere to go when she came out, she’s squatting in a Mount Washington flop house without electricity. “Her family doesn’t want anything to do with her.” She has since relapsed.

Matusick also has seen an uptick in tainted drugs during the pandemic, with dealers diluting heroin and crack cocaine because money is tight. “It can cause more overdoses if tainted with fentanyl. If it’s cut with something not fatal, just junk, people are spending more money to get high.”

The despair is also palpable day-to-day. “We are seeing more suicides. One of our participants hung himself in the woods. He used to distribute a ton of Naloxone. There are also more overdoses.”

But more often than not, addicts are resisting going to the hospital to deal with an overdose out of fear of getting infected with COVID-19, Arnold says. “If an ambulance worker revives them and wants to take them to the emergency room, they say, ‘No way. It’s always a terrible experience going to the hospital. And now you want me to go in there when people have COVID?’” 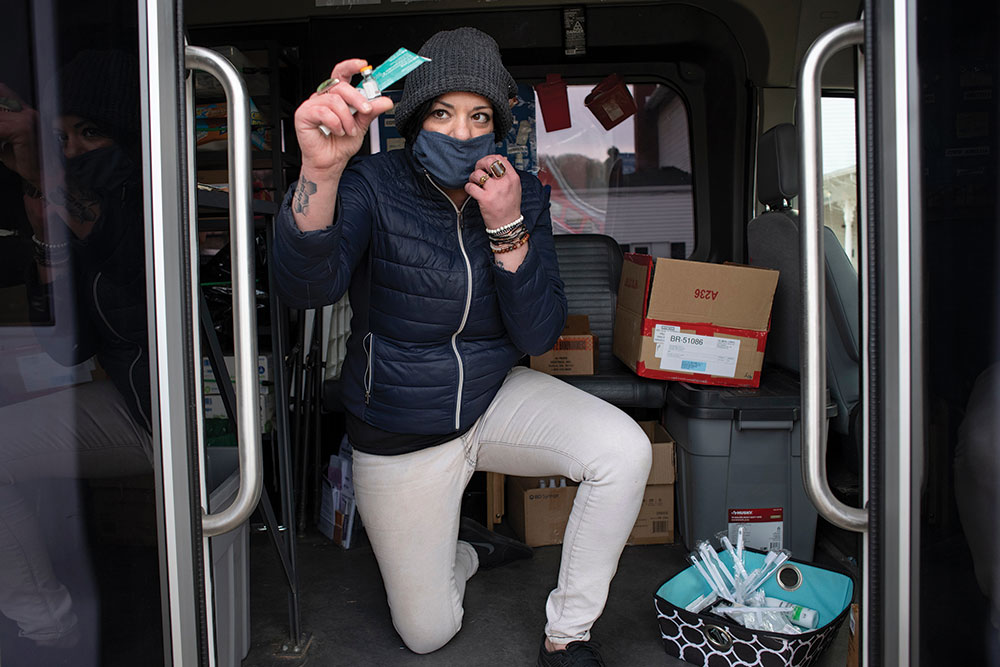 MATUSICK DEMONSTRATES HOW TO USE NARCAN DURING A DISTRIBUTION IN OVERBROOK.

People are also resisting medical care for more basic conditions, such as infections. This fall, Prevention Point partnered with Allegheny Health Network Center for Inclusion Health to staff a medical clinic van to provide wound care, antibiotics, buprenorphine prescribing, pregnancy tests and over-the-counter medication – all services free of charge – so that people didn’t have to go to the emergency room.

For all the stigma of needle access, Prevention Point officials have never had a problem with the people who line up for syringes and pipes and other drug paraphernalia. There was a minor scuffle when the Homewood van gave out Giant Eagle gift cards, but once Ready told people to stop shoving, people settled down. A typical afternoon shift is remarkably tranquil, and police generally leave them alone.

“If you treat people with respect, they treat you with respect,” Arnold says. “People expect to see people shooting up on the sidewalk. But the dirty little secret of needle exchange is that it’s actually kinda boring.”

This article appears in the December 2020 issue of Pittsburgh Magazine.
Categories: Community Feature, From the Magazine