Travelers will soon start to notice some construction barriers as big changes take place both inside and out. 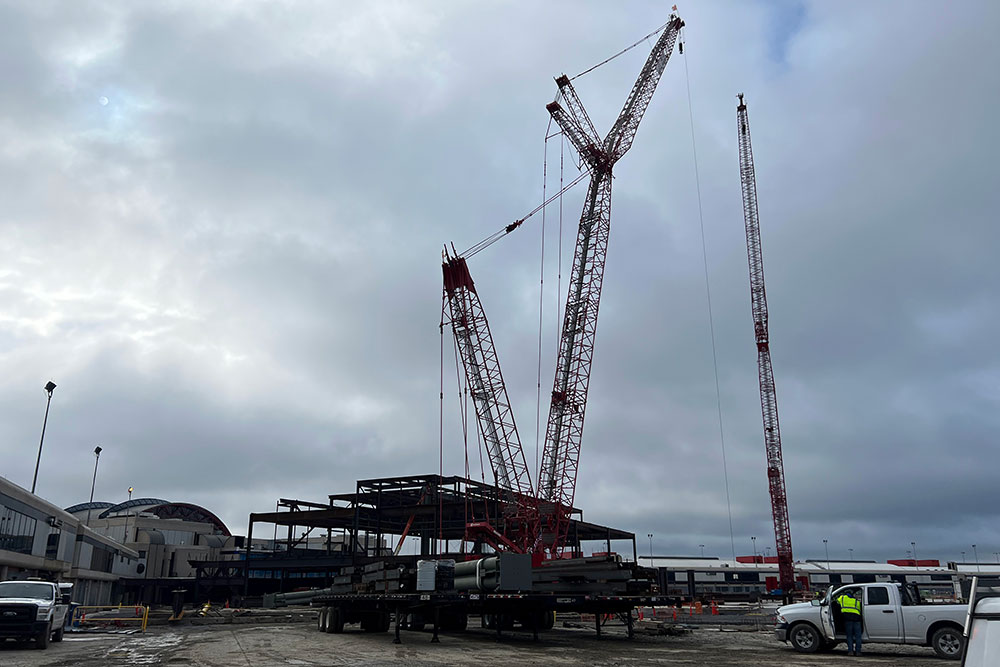 Things are taking off at Pittsburgh International Airport — and it isn’t just the planes.

Progress on the airport’s ambitious $1.4 billion Terminal Modernization Program is well underway, with its first vertical steel beams put in place earlier this month. The project will nearly triple the amount of parking available at the airport by installing what officials say will be one of the largest parking garages in the region. It will also include new passenger and bag check-in facilities, aesthetic upgrades and green infrastructure to reduce the airport’s carbon footprint.

The new terminal will reduce the time to get from curb to airside by about 50%, too.

At a press event held at the mouth of the construction site, crews used cranes similar to those involved with the Fern Hollow Bridge project to place the skeleton of a new bridge structure that will span 1,300 feet — about 100 feet longer that the Fort Pitt Bridge. 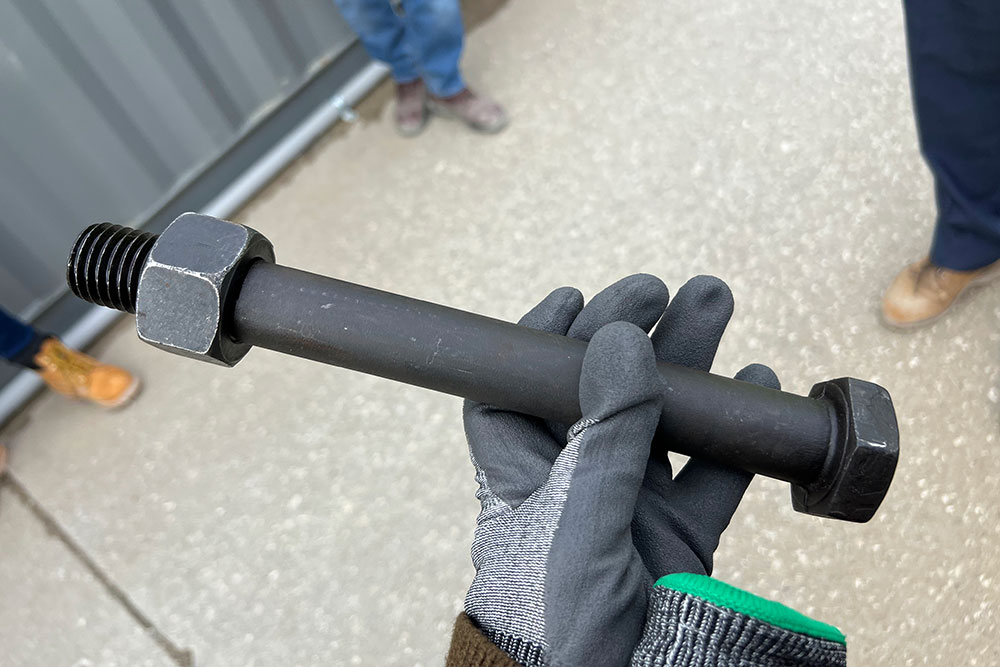 The steel beams used in the project are manufactured across the river by Sippel Steel in Ambridge, staying true to the airport’s wish that the new terminal be built by Pittsburgh, for Pittsburgh.

“It’s going to work a lot better for passengers. It’s going to work a lot better for our partners. We wanted to make sure from the very beginning that Pittsburghers would build it,” says Christina Cassotis, CEO of the Allegheny County Airport Authority, which operates and manages the airport.  “We want to make sure that the people who build it are the people who are going to live with it, fly through it and be proud of it for years and years to come.”

By the numbers, the project will create 14,300 jobs — most of which will be filled by locals; 80% of the work done on the project overall is being done by local firms using local materials. Some 16,000 tons of steel will be connected by 182,000 large connecting bolds and about 9.5 miles of field welding. 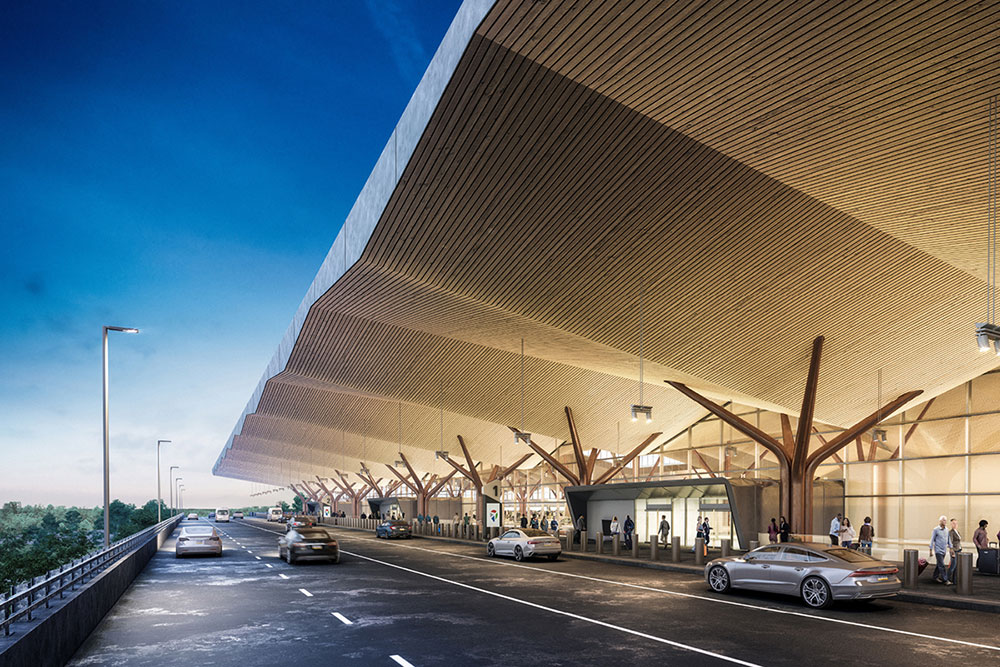 The columns that are going to support the structure were designed to look like tree trunks, and other design elements — including a “rolling hills-like roof system” and “wood-like” materials — aim to emphasize the synthesis of nature and technology at play in the Pittsburgh region.

Having broken ground last October, the 811,000-square-foot facility is expected to be complete by 2025. But travelers may see changes well before then.

Work on the road system is underway, and temporary changes such as lane reductions and short stoppages in traffic might occur over the next couple of years. Officials urge travelers to budget some extra time to get to and from the airport.

While the new terminal is being built outward from around the TGI Fridays in Concourse D, a  separate but related project, the $90 million Airside Renovations Project, will see interior improvements that may be more visible to travelers. 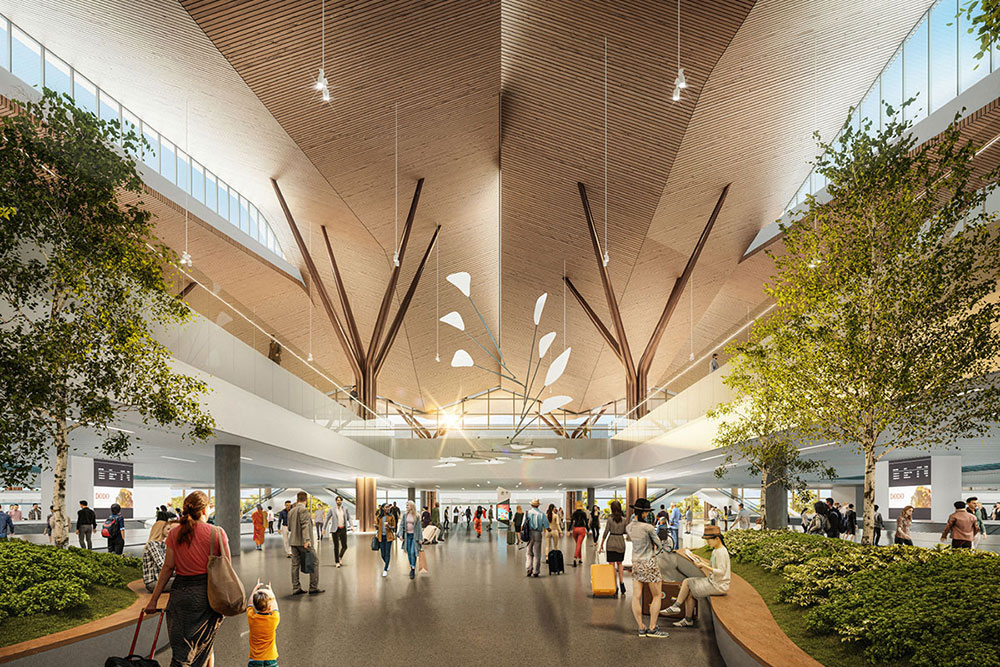 By the time the project is complete, travelers will also bid adieu to the train that carries folks between the airport’s landside and airside terminals.

But it’s a price the airport is willing to pay to bring change to a facility that officials say hasn’t worked as well as it could since the departure of U.S. Airways in 2004. And along the way, Cassotis hopes the project will send a message to the people of the Pittsburgh region that there’s a bright future in the industry.

“I want a whole lot of little kids to say, ‘Cool, look what I could do for a living.’ I want to see kids get into the trades,” she says. “I want to see people understand how important it is that we have welders, ironworkers and construction workers. There’s a great living to be made by building things.”

She adds that she wants people to understand how Pittsburgh’s many assets — from its laborers to the steel itself — have come into the project and made it all possible.

“It’s putting all of the region’s assets on display in this welcome mat to the region,” she says.