A Duquesne University graduate joins thousands of her fellow college graduates nationwide as they try to figure out their next steps into an uncertain future. 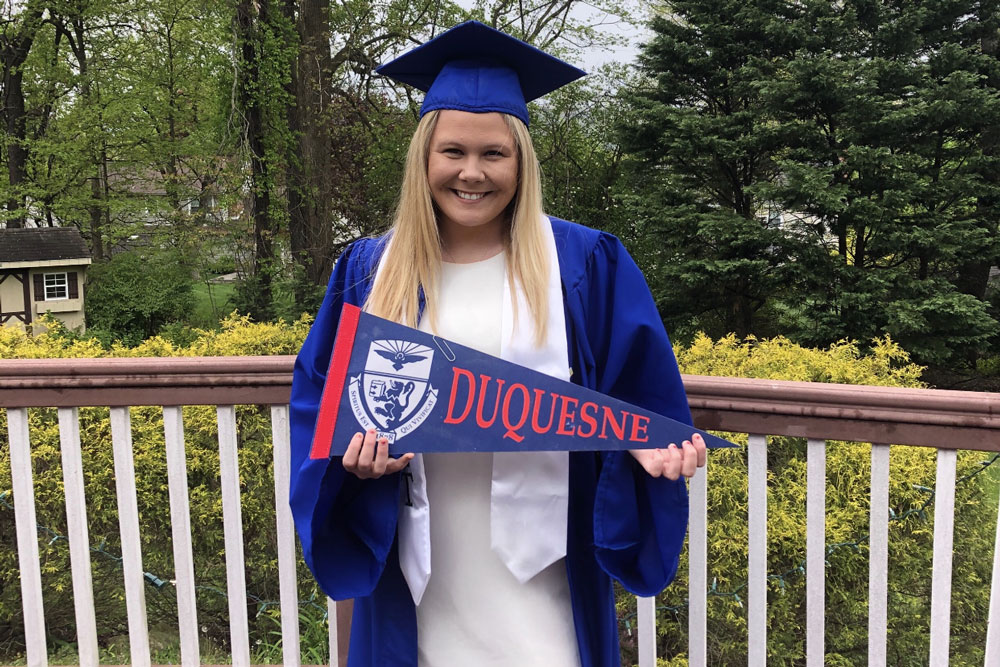 Kelly McBride is dreaming of an office.

There’s a generalization about Generation Z: Because they’re so comfortable with technology, they must not care about working in a physical space. McBride happily provides evidence that truth is not universal.

“I had an internship last summer,” at an advertising agency in Philadelphia, “and I loved the office,” she says. “I loved having that kind of community at work.” Now, with many in-person workplaces closed or operating at limited capacity, she’s nervous about entering the job market. “The thought of not going to an office every day is really scary.”

That internship, of course, came long before her final semester at Duquesne University was cut short by the COVID-19 pandemic. McBride, who has returned to her family home in Berwyn, Chester County, was approaching the end of her senior year when the threat posed by the novel Coronavirus began to circulate among family and friends.

Spring break brought her home during the first week of March. She says her mother raised the prospect that she may not return to campus; at the time, she says, that seemed far-fetched.

She was back for one week before Duquesne suspended classes.

The initial announcement, via email to all students, declared a two-week suspension of in-person classes beginning March 16. That timeline rapidly stretched past graduation.

“For that first week, I still thought, OK, maybe until April,” McBride says. That changed in a matter of days. “I talked to my mom, and she said, ‘You are definitely going to come home. Your semester is over.’”

McBride, 22, studied Integrated Marketing Communications at Duquesne. During her college search, she settled on the city first and a university second. “I really enjoyed Pittsburgh,” she says. “It always looked very pretty to me … I fell in love with it.”

Her passion for the city, she says, stemmed from its neighborhoods — the urban campus of Uptown, the history and vibrancy of Oakland and the celebratory fun of the South Side. The latter neighborhood is the last place she visited pre-quarantine, joining friends in spending part of St. Patrick’s Day on East Carson Street. At the time, she says, the reality of the situation hadn’t hit her student community. “Everything just seemed to be normal; that’s what was so confusing. That Saturday, everything was totally normal; that Sunday, my entire life changed.”

While she admits that many of her peers were slow to accept the threat of COVID-19, she says that she doesn’t know anyone her age who didn’t adjust their behavior quickly after that weekend — despite the online griping some have leveled at Gen Z.

“I don’t see people hanging out with their friends at all. The majority, I’d say, of people I know are taking it pretty seriously.”

From home, McBride completed her coursework and earned her degree; it will arrive, via mail, in July or August. “I don’t know what the next step is supposed to be,” she says; before she moved back home, she had lined up several job interviews. All have since been canceled; her prospective employers didn’t want to try to train new hires at home. “This is unchartered territory,” she says. While many employers are responding to the pandemic by reconsidering how and where work should take place, McBride maintains hope that she’ll be able to find community in a working environment.

“As much as I love that people are rethinking work, I would really like to have that opportunity. I’m a little nervous to see how this is going to change the world.”