Brian Deutsch splits his time between Panda Supermarket and his work-from-home job for Pitt, exposing him to multiple sides of the pandemic. 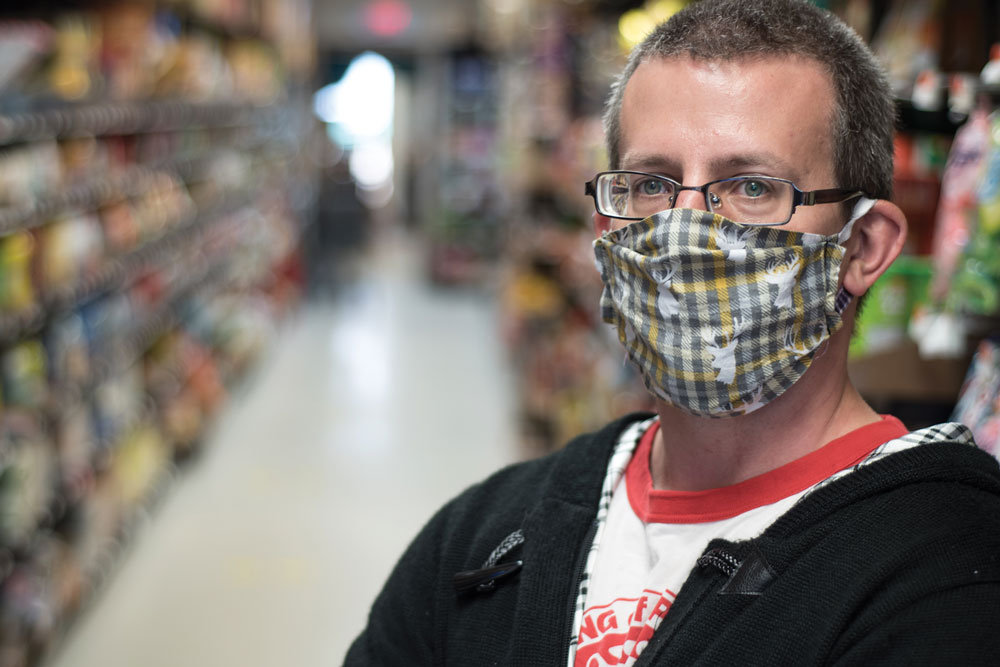 As many people’s work weeks wind down, Brian Deutsch’s picks up.

At 11:30 a.m. on Friday, he transitions from a graduate administrator for Pitt’s economics and political science Ph.D. programs to an employee at Panda Supermarket (

The Pittsburgh native has worked at Panda since April 2018; he picked up the second job when he needed money for emergency home repairs. His bicultural and biracial home life and experience living in South Korea drew him to Panda, since he wanted to contribute to communities that have offered him kindness and generosity. Now, in addition to meeting with faculty and grad students, he fills orders and manages Panda’s Facebook page.

The Asian grocery store, which opened in Squirrel Hill in June 2017, changed its operations starting March 23 in response to stay-in-place orders, during which the store reduced hours to noon-6 p.m. and limited shopping to online orders via Facebook or WeChat and curbside pick-up. (It has since began a phased reopening.)

Before the pandemic, Deutsch worked Monday and Friday evenings after his shifts at Pitt, but the change in operations meant that his shifts no longer existed. Some Panda employees have been unable to work during the pandemic due to being immunocompromised or living with people who are, so Deutsch is using accumulated sick leave and vacation time from Pitt to help fill in the gaps on Fridays, Saturdays and Sunday.

During the time when Panda was online-orders only, from the start of his shift until the end, he ran the Facebook orders during “nonstop shopping,” Deutsch says.

“Whether it’s filling an order or answering questions for customers about, ‘Do we have this?’ ‘When will we get that?’ and that’s basically my day for those three days of the week,” Deutsch says.

Deutsch prided himself and the rest of the staff at Panda for being quick to fill orders, usually within 10-15 minutes. He usually communicated with the customer throughout the process, sending photos back when the store was out of a product and offering alternatives.

Working part-time at Panda and full-time at Pitt, along with other part-time jobs, however, has left him with little time for his children and family. The constant work has also resulted in many nights with little sleep.

“The big thing is that I’m working seven days a week now,” Deutsch says. “I’m kind of trying to make hay while the sun shines because I don’t know when things might get worse and this opportunity might go away.”

Working at Panda, however, also gives him the chance to get out of his house. The physical and mental divide is one that many who are now working from home no longer have and that Deutsch appreciates since “a lot of people just have cabin fever. They’re just so bored being at home all the time.”

The juxtaposition in his employment — one allowing work from home and the other requiring face-to-face contact with coworkers and customers — has also drawn his attention to the divide between those with the luxury to self-quarantine and work from home and those who must continue to work.

“I hope that as we move towards reopening and getting back to more familiar routines that we stop and think, how can we make these routines serve us and serve our communities better because like I said, going back to normal isn’t a good thing,” Deutsch says. “So I hope we take some time to figure out how we want our new lives to look.”