Pittsburgh Dining at a Distance: Back To The Foodture

Make a picnic of burgers and wings from Angel Randolph and Eddie Barnz’s Pitcairn restaurant. 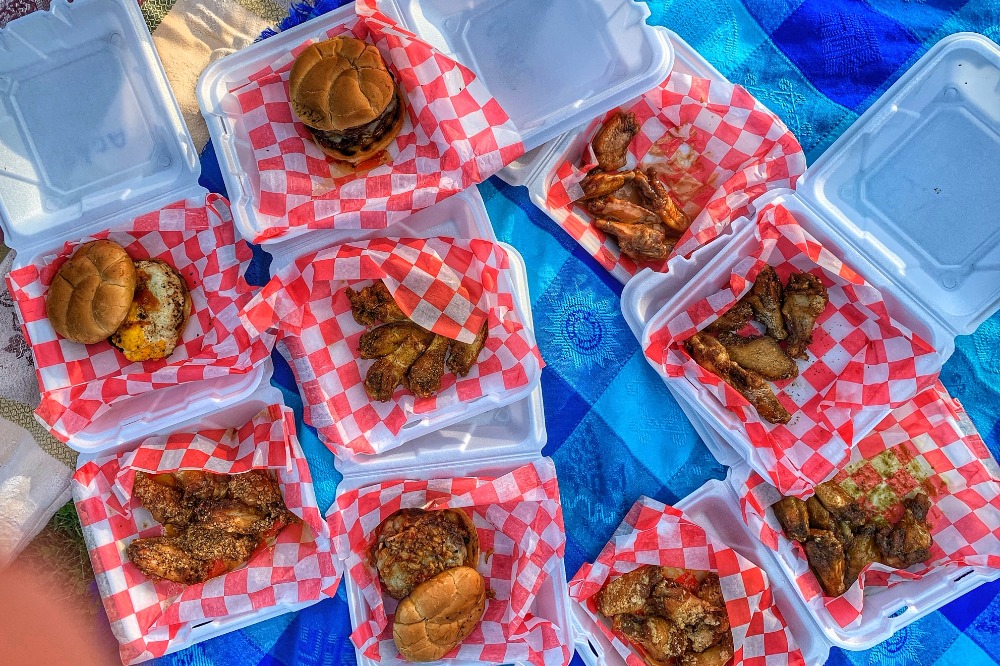 A visit Back To The Foodture in Pitcairn means a festival of “I’ll have just one more … OK, maybe two more … let’s order another six?” chicken wings, and plates of juicy hamburgers assembled into a carnival of original permutations. Eddie Barnz and Angel Randolph run the pocket-sized restaurant, and it’s a gem. In March, I wrote about how Randolph’s creative culinary mind and serious cooking chops combined with Barnz’s front-of-house flair and pop-culture enthusiasm to provide some of the most enjoyable restaurant experiences I’ve had this year.

I’d been thinking about Randolph’s wings and hamburgers for weeks. I dig how she does all the little things, such as charring a bun to add a hint of bitterness to balance a sweeter sauce, that make you crave another bite. So when my friends and I decided to have another takeout picnic over the weekend, it was an easy decision to go Back To The Foodture. And, as it happens, there is a park down the block from the restaurant. Hooray.

Business at Back To The Foodture dropped significantly early in the pandemic. It’s starting to pick up, Randolph says, but it’s still not where it used to be. “We’re doing our best to push through this,” she says.

Randolph says that lists featuring Black-owned restaurants circulating in the wake of the recent police killings of George Floyd, Breonna Taylor and Tony McDade have drawn first-time customers to the restaurant. She adds that she and Barnz have also found a few new favorites from those lists. “We’re trying to help, too,” she says. 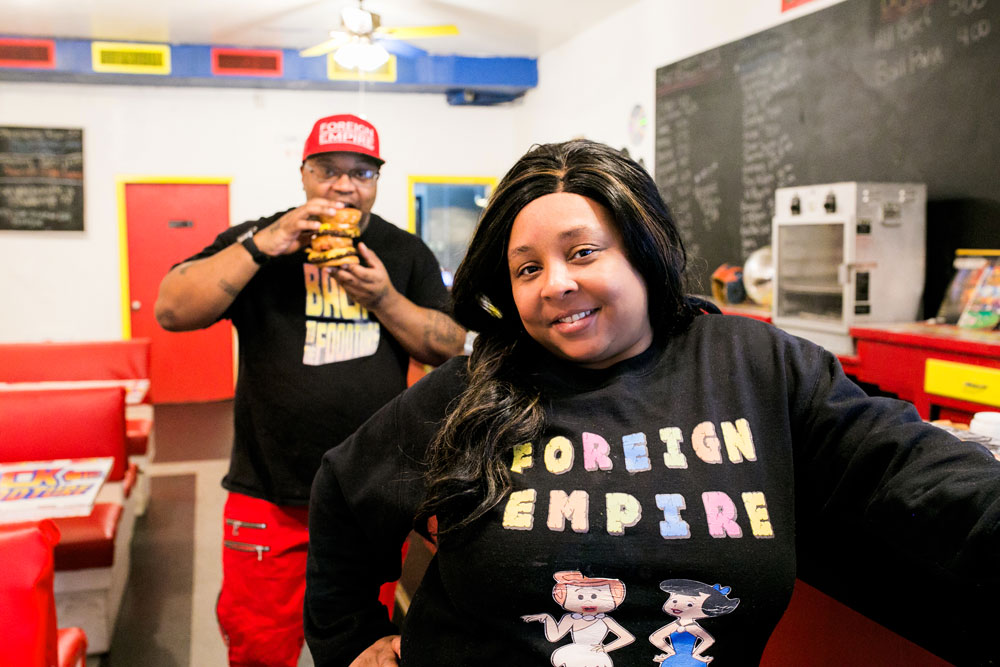 The pandemic hasn’t put a damper on Randolph’s inventiveness. The Back To The Foodture menu now includes 110 flavors of wings, 36 burgers, 18 fries and 22 hot dogs, each tested and approved by her family; Randolph credits her three kids and Barnz as inspirations and prompts for her new ideas. Randolph just bottled a hot sauce, too. Her recently released Angel’s Revenge is a fiery blend of peppers such as habanero, serrano and banana, bolstered with a vinegary seasoning mix that includes allspice, marjoram and garlic; it’s a zinger.

She’s set to launch an expanded summer menu on June 15. Look for new burger permutations among the offerings, including two stuffed hamburgers: There’s one packed with bacon, onion, mushrooms, asiago cheese and Parmesan cheeses and onions; it’s topped with lettuce and cheddar and smothered with ranch dressing. The second burger encases onions, bacon and cheddar and is finished with teriyaki sauce. Randolph says she also is finalizing a veggie burger stuffed with creamed spinach and topped with green tomatoes. Randolph crafted two new hot-weather wing flavors, too: barbeque-Henesy and maple-Grey Goose.

And, she says, she’s bringing something new to the region — ice cream potatoes. The optical illusion dessert, an ice cream sundae designed to look like a fully stuffed potato, was inspired by a conversation with one of her three sons. “We want to keep doing things that nobody in Pittsburgh has even thought about doing,” Randolph says.

As for that picnic, it was pretty perfect. Barnz ran our food to the car, and five minutes later, my pals and I dove into a spread of wings and burgers on a grassy field in Pitcairn Park. We’d typically share those burgers so we could sample a bunch of them, but current science indicates the COVID-19 pandemic is far from over, so we each got our own. I opted for One More Chance, one of my favorite burgers in the region. Smothered in sweet chili sauce, and topped with pepper jack cheese and crispy onions, it hits all the salty, fatty, just-a-little sweet marks, even if it missed the transcendent aspect of the charred pretzel bun (Barnz called to say they were out, so a Kaiser bun had to do). We brought our plates and tongs so we could get a taste of all seven flavors of wings we ordered. I’m typically not a “this is the single best of this” person, but if pressed to name the top wings in the city, I could make a strong case for Randolph’s tart and tangy salt & vinegar in a dry-rub category and her Barnzy sauce, piquant with Angel’s Revenge, garlic and butter, for wet wing.

The restaurant isn’t set up for physically distant dining, so you’re going to have to wait to get in that game of Street Fighter II or take a gander at Barnz’s bar-top historical collage and pop-culture artifact collection; Back To The Foodture is a takeout operation for now. So, the next time you’re looking for takeout on a beautiful night, you should do what I did and have a Back To The Foodture picnic.