Pittsburgh Bartenders Bring the Garden to the Glass

Bartenders are using centrifugal force, tinctures and more to amplify and preserve the season's harvest. 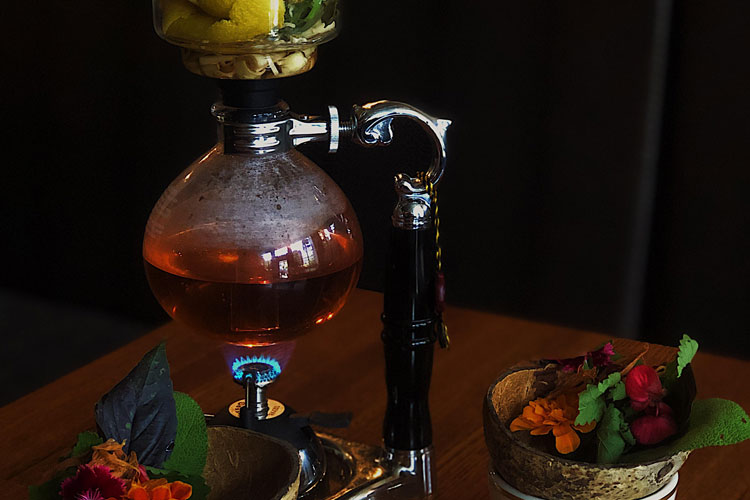 Taylor Ciarallo, general manager and bar lead at Station in Bloomfield, is working with the restaurant’s small kitchen garden, as well as local growers such as Goodness Grows Farm and Rivendale Farms. She’s using modern technology to bring summer produce, flowers and herbs to the restaurant’s cocktail menu. “I’ve upped my techonology game so I can take pretty much any ingredient and turn it into a commercial grade liquor,” she says.

Ciarallo is particularly excited about acquiring a centrifuge, which enables her to produce infusions that are perfectly clear. Ciarallo purees them and treats whole ingredients with food-safe enzymes and acids to break them down for easier processing. Then, the puree goes into the centrifuge where centripetal force propels the denser solids in the puree to the bottom and pulls the liquids to the top, resulting in a perfectly clear fluid. This allows her to heighten the flavors of the base ingredients, as well as make something that’s visually appealing. “I love playing around with textures and colors. If you heat produce to infuse or macerate it, it will often turn brown, which is fine, but then you end up with a brown product. It doesn’t live up to your expectations or the guests,” says Ciarallo.

Ciarallo also uses fermentation to transform ingredients for her cocktail menus, most recently making chamomile honey for a Penicillin play using local honey and herbs from Root and Heart Farm in Gibsonia. “I try to think like a chef,” says Ciarallo. “I think of cocktailing as uplifting the flavors in each drink.” 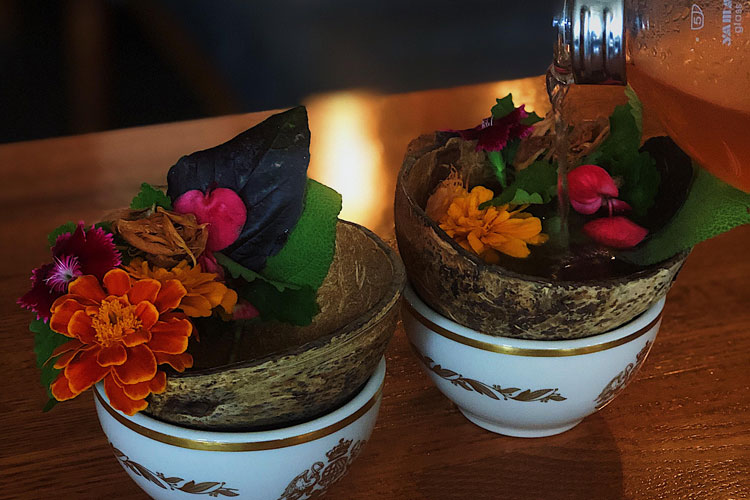 On the formerly empty lot next to Spork in Garfield, a garden is ramping up for its second summer season. The restaurant’s full-time farmer, Jonathan Corey, started Spork Garden in 2018 and has expanded it to cover a third of an acre, including trellised rows and a small greenhouse. While the majority of the garden’s bounty goes to the kitchen, the restaurant’s bar program also works to incorporate a variety of edible flowers and herbs into the cocktail menu.

“It’s a cool concept to think that something grown in your backyard is now sitting in your cocktail glass,” says beverage manager Olivia Lindstrom.

Lindstrom herbal infusions, macerations and syrups such as lilac-infused gin using tools such as a centrifuge. An unusually wet spring produced a glut of herbs, so Lindstrom created an early summer sipper with garden-grown lemon balm syrup for the Pitter Patter, a variation on a Penicillin. Now, edible flowers such as nasturtiums serve as an extra bit of flair to grace the glass.

As the summer progresses, expect to see seasonal tweaks to the cocktail menu.

Wigle Whiskey and Threadbare Cider House and Meadery both rely heavily on local and regional farms for the ingredients to make their spirits. “We’re the largest consumer of organic grain [for our whiskeys] in the state,” says co-owner Meredith Meyer Grelli. “We’re already buying from and working with all of these farmers. It only makes sense to look at what they’re growing and also showcase it in a cocktail.”

Baby ginger from Rivendale Farms is used in Wigle’s Afterglow Ginger Whiskey as well as some of its cocktails. “You wouldn’t think of ginger as Pennsylvania product but they are growing beautiful baby ginger for us,” says Grelli.

Both the Barrelhouse and the Ciderhouse have small herb gardens for kitchen and bar use. The gardens are also educational, demonstrating many of the botanicals such as irises and rosemary that Wigle uses in their spirits, ciders and bitters. “My favorite time of year at the Barrelhouse is May when our hundreds of irises are blooming,” says Grelli.