Over its six years, the dynamic multimodal space has slowly evolved from a very fun bar into a fully-fledged nightlife and dining destination 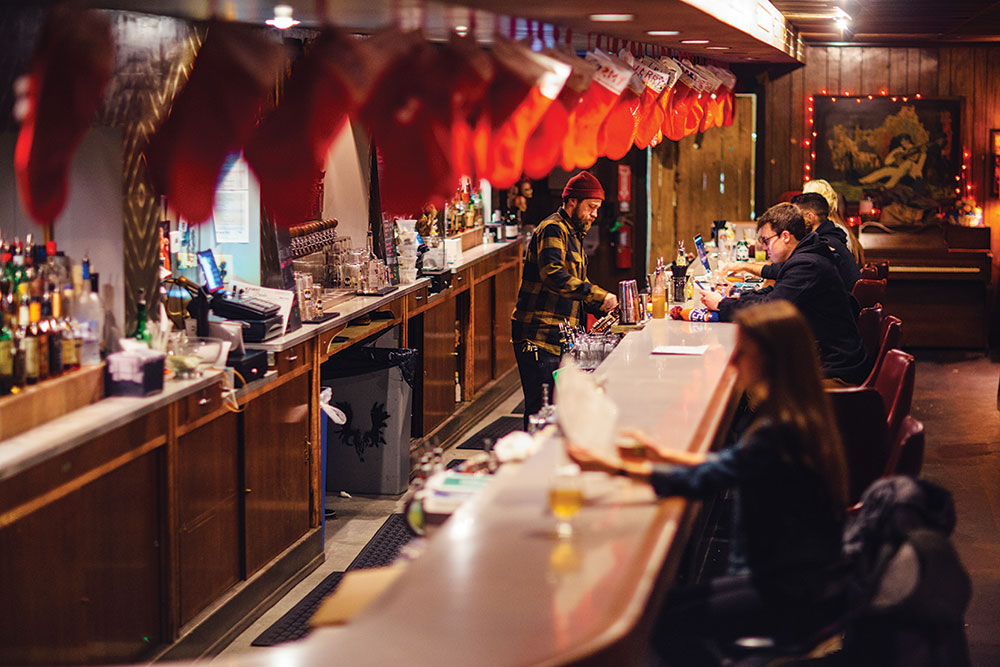 Although Spirit officially marked its sixth anniversary last month, its owners decided to wait until June 6 to celebrate the occasion. They are throwing an outdoor event, with a special menu from The Vandal — also turning six — that will feature food, musical guests and, as is signature for the Upper Lawrenceville establishment, a generally good time (it’s kid- and dog-friendly, too). It’ll be another step closer to normalcy for the popular entertainment venue, culminating in the resumption of indoor concerts in September.

“We wanted to have a safe celebration, so we waited,” says co-owner Leigh Yock.

Over its six years, the dynamic multimodal space has slowly evolved from a very fun bar into a fully-fledged nightlife and dining destination, while holding on to the rambunctious spirit that spurred its creation.

“I feel like we’ve grown up in a lot of ways. We’ve worked our various crafts and skills to create a better, more mature place. For example, we can host bigger acts with better lighting and upgraded sound systems. But at the same time, we’ve still retained the sensibilities that we started with. We’re still anything goes, everyone is welcome kind of place. And we don’t plan to change that,” says co-owner Tom Barr.

The Spirit crew built a sturdy, well-ventilated tented space that served as a refuge for outdoor dining for much of the COVID-19 pandemic (it closed entirely except for takeout and delivery during the coldest winter months but has since reopened). Spirit remains completely closed indoors. Aside from a smattering of events in the tent, its role as an entertainment venue has been on pause, too. Spirit’s kitchen, however, has been operating on overdrive, so Barr looked at the moment to hone in on the evolution of the space’s culinary program.

“A silver lining of the pandemic is, because we couldn’t throw our big parties this year, I’ve been full time in the kitchen. It’s allowed all of us to streamline operations,” he says.

The evolution began prior to the pandemic in February 2020. After months of testing, Spirit introduced round 12-inch pies cooked in a new PizzaMaster deck oven. More recently, Barr and kitchen manager Tommy Dorman have continued to refine the construction of the dough used in the round pies and the establishment’s signature grandma-style tray pizza. Spirit’s kitchen crew puts out terrific versions of classic pies but also isn’t afraid to put together whimsical-yet-balanced topping builds with a bit of tasty wordplay. Nacho Butt, for example, is topped with roast pork, chihuahua and cotija cheese, preserved lime, fried tortillas and pickled onion; RAMPAGE features ramp pesto, nameko mushrooms, Goat Rodeo chevre and mozzarella. Vegans and vegetarians also have plenty to choose from, both in pizza builds and with items like hyper-seasonal salads, including its current offering of fiddlehead fern, arugula, shaved ramp and radish with lemon-black garlic dressing.

Nearly all the toppings for the pizzas, as well as for other menu items, are made in-house. Spirit has pulled its mozzarella from the start, and they’ve gotten really good at it; it now ranks among my favorite locally made cheeses (like many, I’ll miss being able to order weekly mozzarella at Spirit’s Bloomfield Saturday Market stand, which won’t be in operation this season). Longtime Spirit employee Daniel “Angry Dan” Mitchell is in charge of curing items such as corned beef and lox; he also oversees Spirit’s excellent bagel operation.

Barr says the newest addition to Spirit’s menu is a weekly shareable item, which, as much as possible, will celebrate the region’s meat producers; right now, there’s a Fallen Aspen Farm pork chop with nameko mushrooms, ramps and lemon on the menu (if you eat pork and haven’t tried Fallen Aspen’s pork, make it a priority to do so).

One of the secrets to Spirit’s success is there almost always is a significant capital improvement in the works. Next up is a more built-out structure that will reinforce and expand the tent and serve as an all-weather space where people can enjoy meals and drinks free of distraction when the two-level venue hosts events, bands and other activities indoors.

“It’s fun. We don’t take ourselves too seriously,” Barr says of Spirit’s success over the past six years. He’s almost right — I’d argue that what makes Spirit so great is that while the people that run it are indeed a fun-loving bunch, they take themselves seriously enough to know how to make it a blast for the rest of us, too.
242 51st St., Lawrenceville; 412/586-4441, spiritpgh.com