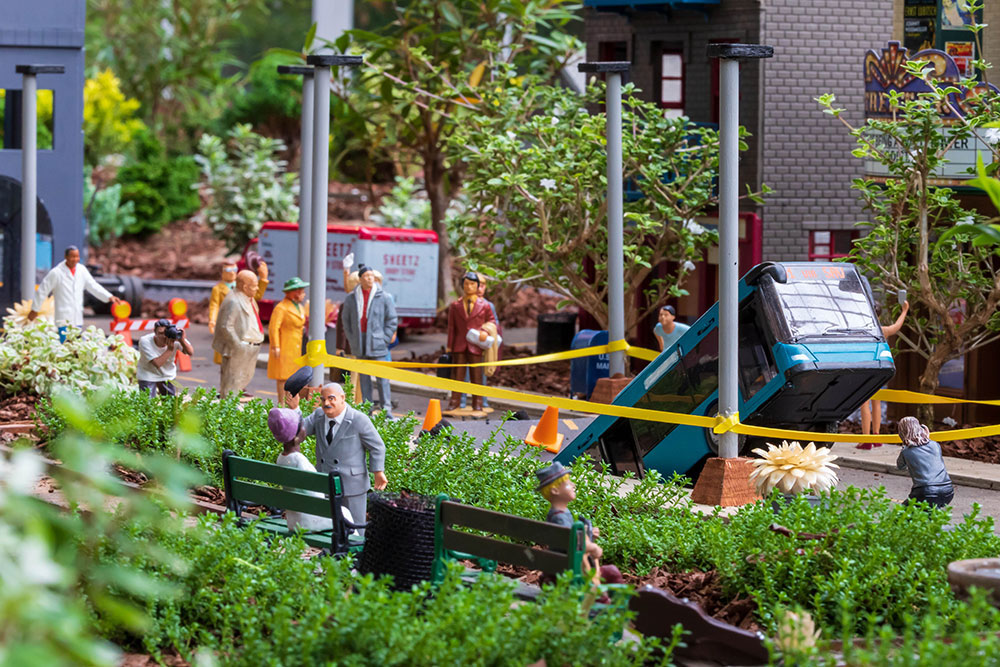 Two years ago this month, a legend was born.

The legend, of course, is the infamous sinkhole bus. The vehicle, a Port Authority route G31, was partially swallowed when a massive hole opened up at Penn Avenue and 10th Street, Downtown, in 2019. And because Pittsburghers love all things absurd, it quickly became a cultural moment, spawning multiple memes and Halloween costumes, Christmas ornaments and a range of delicious delights like an ice cream sundae at Millie’s and doughnuts at Oakmont Bakery.

One Friendship resident even got a tattoo of the thing.

Now, Phipps Conservatory and Botanical Gardens in Oakland is celebrating the sinkhole bus’ second birthday with its inclusion in the new Garden Railroad: Bridges and Tunnels exhibit.

Featuring miniature recreations of iconic Western Pennsylvania scenes, including traffic detouring around miniature Liberty Tunnels — closed for construction, of course — and touchless interactive stations that prompt the Duquesne Incline’s ascent and descent, the exhibit pays homage to all the region’s rich histories and ample quirks.

Visitors can also expect to see garden-scale trains traveling over various signature bridges, including a yellow suspension bridge and a wooden covered bridge, as well as a mine car traveling into a mine shaft. And, of course, the scaled-down sinkhole bus surrounded by yellow caution tape and curious onlookers.

Because it’s the botanical gardens, after all, the exhibit is also filled with more than 3,500 plants — groundcovers, herbs, sedums, succulents, dwarf conifers and more.

Garden Railroad: Bridges and Tunnels is now on display and open to the public.