Perspectives: What to Do When Surprised by an Exotic Animal in Pittsburgh

Simple instructions for when a zoo animal turns up on your morning commute. 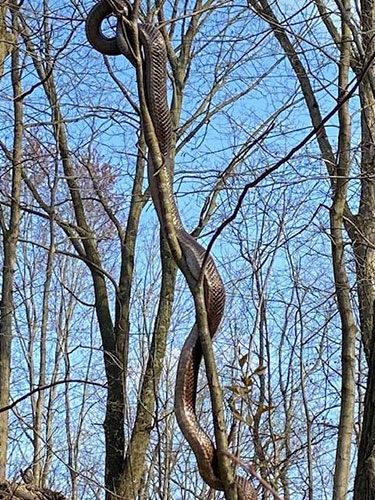 When Pittsburgh warms up in the early spring, everyone gets outside. Including exotic animals.

Two tales of unexpected fauna dominated local newscasts and Twitter feeds this week. A sleepy black bear emerged from hibernation and decided to take in the views along the South Side Slopes; meanwhile, a rat snake, which has lived in the neighborhood for decades and is reportedly pretty miffed at the suggestion that he’s some kind of newcomer, was getting in a morning stretch and terrorized a passing hiker in Frick Park.

Pittsburgh hasn’t been so taken with tales of out-of-place critters since that one summer when we were lousy with errant crocodiles. We decided that we need to issue something of a guide — a what-to-do on highly unlikely wildlife encounters.

There are, however, simply too many animals, and too many places, to cover every eventuality. So, we got two big hats — a ’70s-style Pirates pillbox and a discarded novelty St. Patrick’s Day cap (also known as a South Side tumbleweed) — then put a bunch of animal names in one and a bunch of neighborhoods in the other. We feel this method accurately represented the randomness of our recent animal encounters. (Also, it was easy.)

Here are the results, and our sound, not-at-all-riffed advice on what to do should you find yourself part of an unexpected Steel City safari.

If you find a moose in Lawrenceville: Try to steer it away from the boutiques. In a tightly packed environment, a moose is not going to know what those antlers are hitting, and you’re going to lose a lot of merchandise. (Arsenal Lanes is also right out: loud noises, slippery floors and tight corners. Bad conditions for a moose.) The best thing would be to lure the moose into Allegheny Cemetery, where it can become sort of an unlikely resident (and discourage people from breaking in after dark; running into megafauna in a graveyard is a definite buzzkill). Above all, though, discourage the moose from renting in the neighborhood; the prices are going to be high and the square footage will be too small for a moose. No way a moose gets to the second floor of a Lawrenceville house.

Should an ostrich turn up around the University of Pittsburgh campus: Oakland has a high concentration of people walking down the street while looking at their phone, so an ostrich might do some good; you’re not going to scroll Instagram if you’re avoiding the surprisingly powerful attacks of an angry dino-bird. Ultimately, though, ostriches are probably too surly to integrate into the central neighborhood. I’d let the ostrich cool off in one of the lesser-used nationality rooms for a few days while we build an enclosure in Schenley. It can learn to disc golf! (Or at least learn to capture the frisbees of disc golfers, which would be funny every time.)

If you suspect you’ve found piranhas at the Point: First, be sure! Find a Greek restaurant and buy the whole thing of rotating gyro meat. Throw it in the water; if they’re really piranhas, it won’t last 20 seconds. At that point, do not go to the authorities; if movies about deadly aquatic creatures have taught me anything, it’s that the city fathers will never close the beaches. (Or the riverfront promenades, in our case.) No, you’ll want to go to the real heroes we’ll need, here: hobby fisherman. The opportunity to take a genuine Monongahela piranha (or, Mononganha) to the taxidermist will get the job done before breakfast tomorrow.

When a bat invades your Bloomfield home: First, please be assured that this is neither Batman nor Dracula. Batman does not possess the ability to turn into, or otherwise disguise himself as, a bat. Dracula can only turn into a vampire bat, which is much larger than anything that might turn up in this part of the country. (Dracula can also turn into a wolf, a much more serviceable animal for our geography, but that’s neither here nor there.) Anyway, this really happened to a friend of mine, and she just called Humane Animal Rescue of Pittsburgh for further instructions. That, by the way, is the genuine piece of advice in this rundown of nonsense: If you suspect an animal is injured, in danger or otherwise out of place, check HARP’s website first, then call for more advice. They’ll know what to do.

If you smell a skunk on Carson Street: That’s weed. There’s no skunk.

In the event of giraffes in Millvale: Millvale is one of those funny areas where there shouldn’t really be that much traffic, but somehow, there always is. If we could train the giraffes, which should have a clear view of the relatively low-lying borough, to indicate better routes for oncoming cars, we could probably save a lot of time — and, in turn, get me to my Iron Born pizza quicker. So, if this happens, let’s begin working out the details of developing a GPS (giraffe positioning system). Pittsburgh innovates, after all.

If the Aviary sloths (slowly) escape and breed throughout the North Side: This is the dream, isn’t it? I’m sure there are good reasons why this can’t be the case (probably relating to climate, diet, predation and a half-dozen other facts of life), but don’t we all really want to live in the one North American city that happens to have wild sloths? Seriously: What do we have to do to make this happen? Some form of biodome? Let’s do that. Get a Kickstarter going. It’ll pay for itself when we can start making “Sloth City” T-shirts later on.

Should an elephant appear on Mount Washington: Due to an obscure bylaw in the city charter, if this happens, the elephant becomes mayor. Please afford it all the rights and privileges associated with its new office.