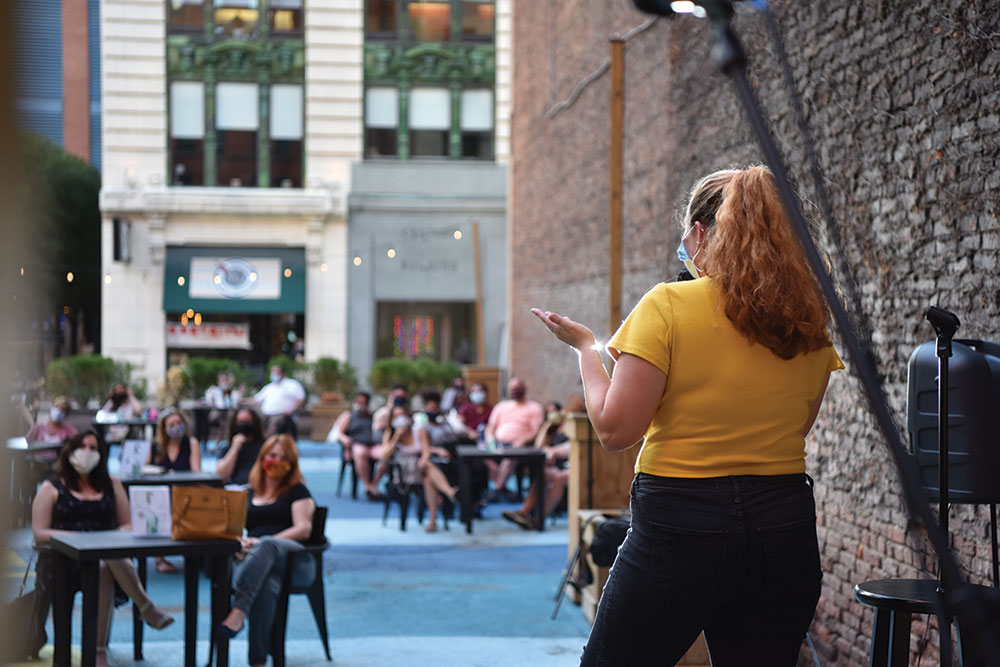 ARCADE AT THE OASIS PHOTOS BY LOUIS STEIN

How do you make an intimate art form safe at a time when intimacy isn’t possible?

That’s the dilemma that has faced stand-up comedians and comedy venues since March, when nightly performances in Pittsburgh and across the country screeched to a halt. For months, there were no touring comedians making weekend appearances, no improv or stand-up at nonprofit comedy theaters and no open mics at bars and nightclubs.

As performers and producers began toying with ways to bring comedy back, it was clear that compromise would be necessary. “There’s never anything [else] that can capture what comedy is supposed to feel like — in a small room, with the audience on top of you, with low ceilings,” says Jason Clark, general manager of Arcade Comedy Theater. The theater experimented with online programming in the early stages of the pandemic, and much of it found an audience; some online experiences, including the youth-focused Penny Arcade shows, are ongoing.

Yet as the theater began to plan a comeback, he says, the idea of preserving some degree of normalcy was paramount. “My vision was that I thought we would have to maintain the experience that you would have in our theater. I thought that was very important, and so did the team.”

David Kaye is a veteran comedian who produces shows under the Slapsticks Productions banner. Like Arcade, Kaye has toyed with online performance over the past few months. While there are possibilities there, he says, it’s a fundamental shift.

“Going online full-time with comedy is television,” he says. “It’s not live performance.”

For both Arcade and Slapsticks, those realities have pointed in one direction: outdoors.

Earlier in the year, there was general reluctance to move to alfresco shows; it’s a truism in the comedy business that open-air performances are much more difficult, as the intimacy of a confined room enhances laughter and thus boosts the mood of the crowd. As it became more clear that indoor settings were unrealistic, though, comedy began moving outside.

Stand-up tours have begun returning to the area, almost exclusively via shows at drive-in movie theaters. Starlight Drive-In, in Butler, has hosted comics including Bert Kreischer, Hannibal Buress and Iliza Shlesinger. In these shows, audience members remain in and around their cars as the performance is simulcast on drive-in screens.

Kaye performed at one drive-in theater event in the Cleveland area. “Instead of laughter and applause, it was car horns and headlights flashing. I thought that it was going to be really, really uncomfortable, but … it wasn’t bad.” Kaye has also booked shows featuring local performers through Slapsticks at JB’s Roadside Bar & Grille in Tarentum, which has a small outdoor stage. 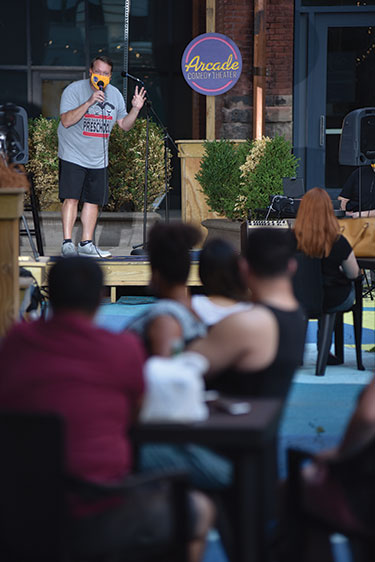 For Arcade, the move outdoors involved a search for the right venue. “We physically toured the city and looked at 12 outdoor spaces” around the theater’s Downtown home, seeking to keep the show within the Cultural District. One space stood out, a lot between buildings on Seventh Street that had recently hosted the art installation “Prismatica.”

The theater began hosting shows in the space, dubbed “Arcade at the Oasis,” in August. “What’s interesting about the space is, because Downtown Pittsburgh buildings are narrow and deep, that space is narrow and deep,” Clark says. “Even though we’re lacking a ceiling, we are getting nice acoustics.”

Aside from technical and logistic challenges, the transition has meant a set of rules designed to encourage safe behavior. Arcade at the Oasis shows are ticketed exclusively online, with no cash exchanged and no contact between staff and audience members. Reserved, numbered tables are placed at a distance from one another; hand sanitizer is available at every table. Audience members must remain masked.

Clark and Kaye also stress that the safety of performers is a priority. Arcade requires performers to remain masked as well; at Slapsticks shows, each comedian is given their own microphone and stand, sanitized before the show and brought onto the stage by the performer themselves.

Clark says the need for these shows is about keeping comedy going despite current challenges. “We felt that this art needed to breathe … We’re all intertwined in this art form, and it goes beyond comedy. It goes into other theater companies.

“We were seeing our friends — our loved ones and our families — who aren’t able to do something that is just a passion. And we felt that there was a responsibility for us to do it and do it safely.”

Effective and successful though these individual shows have been, the continued success of stand-up in Pittsburgh will depend on progress fighting the pandemic. For one thing, outdoor events are going to get a lot less appealing in a few months. Clark says people started asking about this eventuality immediately. “We were two weeks into this outdoor experiment — four shows sold out — and people were asking, ‘What are you going to do when it snows?’ … That’s very Pittsburgh: ‘Good for you, but what the hell are yinz gonna do next?’”

More pressingly, however, is the economic fact: While a limited number of shows, with reduced audiences, is possible, that’s probably not enough to sustain business long-term.

“The easiest way for us to say it is that it’s not rosy but it’s not dire … we will have to make another pivot when it comes to production [of larger shows],” Clark says.

Kaye’s perspective, as both performer and producer: “I’m not panicked yet. But I’ve been polishing the panic button.”