Perspectives: On Caring to See

A teacher at the University of Pittsburgh learns a lesson about street medicine. 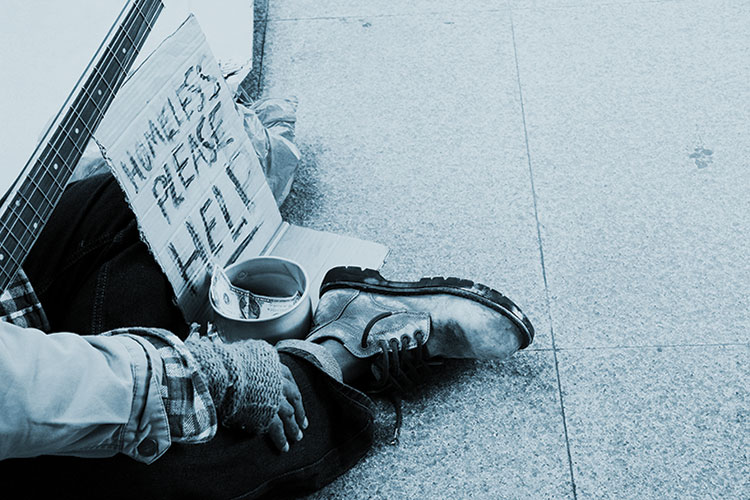 There’s a man who panhandles in Oakland, not far from the University of Pittsburgh. His beard is white and scraggly, and his face is worn and leathery. Every day, from 7 a.m. to 2 p.m., he lies down on the sidewalk in front of Rite Aid and shakes his donation cup.

His name is Richie. In the winters, he nests in his sleeping bag, and in the summers, he lies atop cardboard to protect his skin from the heat. He scrawls histrionic messages on makeshift signs: “Truman Bombed Pittsburgh” … “Steel Mills Were Extermination.” … “America is worse than Nazis.”

I moved to Pittsburgh for graduate school eight years ago and have been teaching at the university, in some capacity, ever since. I’ve walked past Richie hundreds of times. Dropped countless dollars into his cup. But until last year, I’d never spoken to him. Barely even said hello. Truth be told, Richie was the panhandler I most hoped to avoid.

I hated seeing Richie because I hated how helpless he made me feel. The very first time I saw him lying there on the sidewalk, I felt a shock of sadness — as though I was a child seeing a baby bird fallen from its nest. New to Pittsburgh, perched from my air-conditioned seat on the bus and stopped at a red light, I couldn’t look away and couldn’t stand to look. In that deep-heat of August, he appeared so frail and still. Too still? I studied his body for motion. Was he alive? I prepared to call an ambulance. Then, just as the light turned green, I saw him raise his hand at a passerby.

As time passed, my shock gave way to numbness — which gave way to something worse. I began to notice how people would kneel beside him and coo over him. Are you OK? I’d see middle-aged floozies in sharp-looking blazers leave $10 dollar sandwiches for a man who would need thousands of dollars to make any meaningful change to his life. I’d judge the helpers to be naïve out-of-towners. They don’t know! You can’t do anything to help! I began to fantasize about scribbling my own histrionic messages onto $10 bills. How much money will it take?!?! We’ve failed failed failed!

I don’t know what breeds this kind of cynicism. But I suspect it’s a failure of my imagination. For this, I feel fortunate to have discovered the practice of street medicine — which is at once a healthcare practice and a philosophy, pioneered here in Pittsburgh by Pittsburgh Mercy’s Operation Safety Net and Dr. Jim Withers. Street medicine asks us to consider our failures to meet people in their realities. In the last few years, I’ve been lucky to have tagged along with street medicine teams as they bring healthcare to the people of Pittsburgh who live outdoors.

Today, rather than cynically seeing naïve do-gooders who kneel beside Richie to placate their egos, I can choose to see thoughtful helpers folded within a vast network of healthcare workers and social workers who give Richie care and attention when he needs it — and jackets and blankets when it matters most. The stack of neatly organized socks, fresh and clean, which Richie places beside his donation cup: these are prescriptions for frostbite prevention — the crucial donations for survival outdoors. This is care. This is street medicine.

Out on rounds with street medicine teams, when I finally spoke to Richie, I asked him what he’d want folks to know about his life. “People need to know about survival,” he said. “Survival for me is everything.”

In another era of his life, Richie survived by working in the pharmaceutical industry — was a working stiff just like anyone else. Now, for more than 25 years, Richie has lived outdoors. But the truth is, he’s still a working stiff — like you and like me. Punches his clock, shares his messages and shakes his cup. He takes his panhandling as seriously as I take my career. When I finally chatted with him, I felt another kind of shock when we pieced together how we’d both stumbled into the Oakland community at the same time. Eight years ago. Not so different, really. We both found homes here — means for survival.

Tim Maddocks is a writer, researcher and editor who teaches writing at the University of Pittsburgh and serves as the managing editor of Sampsonia Way Magazine and as an editor for Longform.org.

This article appears in the July 2019 issue of Pittsburgh Magazine.
Categories: Collier’s Weekly, From the Magazine