Perspectives: It’s Van Gogh, But Is It Immersive?

The heavily hyped exhibit is a reminder that we need to be a bit more descriptive — and discerning — with our events. 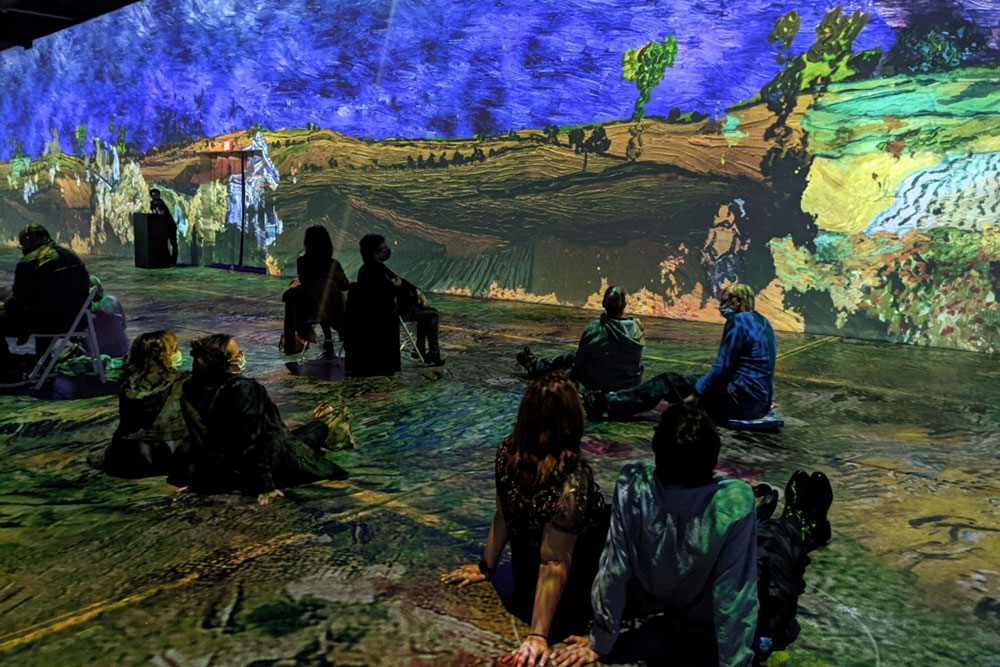 The exhibit, currently taking over an unassuming building in a quiet corner of the North Side, is an artful and captivating demonstration of Vincent Van Gogh’s style and work. It lends a deep and detailed appreciation of the artist’s eye and quite thoroughly illustrates his methods.

It’s soothing, colorful and very worthy of your Instagram feed.

After being invited to experience it, though, I’m not sure it’s immersive. And, more and more, I don’t even understand what the word immersive means.

The adjective can be attached to theater, exhibitions, interactive experiences, interactive games, light shows, theme-park attractions and nearly any other manner of artful endeavor. It’s a very in-vogue descriptor; from a marketing perspective, it seeks to convey that the thing being sold is somehow more involved than the average experience.

(I should note that I know this dilemma intimately, since I’m the co-founder of an immersive-theater company. We know what we mean when we say that, but we’re always arguing over how best to describe it — since the word “immersive” itself is so broadly used.)

Lately, it seems, everything wants to be immersive. I saw an ad that described the “Rocky Horror Picture Show” tradition as an immersive experience. Who knew? We were doing immersive theater for decades, just by going to the movies in our underwear and throwing toast at the screen.

In practice, though, I expect that an immersive thing — whatever that thing may be — is going to involve a radically and near-totally transformed space, with some manner of exploration (or at least movement). The foundational New York immersive production “Sleep No More,” which resumes its decade-long run in February, spreads out over dozens of rooms on multiple floors of a sprawling warehouse, with branching narratives sweeping in and out of rooms over the course of three hours. “Omega Mart,” an interactive art installation currently open in Las Vegas, hides a science-fiction tale among secret passages, a thousand tiny jokes and breathtaking works of visual art.

That’s not to suggest that grand scale is necessary for an event to honestly call itself immersive. When an experience like “The Alice,” the pop-up cocktail show that occurred Downtown recently, bills itself as immersive, that makes sense to me: I interacted with people in character, I moved around the room solving riddles, and the small space was at least mostly modified to fit the “Alice in Wonderland” theme. While the presentation of that experience raised some valid questions, it did enough, in my mind, to bill itself as immersive.

Which is weird, what with “immersive” being the first word in the name.

I wasn’t entirely sure what to expect from the exhibit (despite the fact that Lauren Davidson previewed it for us a few months ago). The mystery of what, precisely, guests will see is part of the intrigue around events such as this; to traffic in such uncertainty, though, you have to pay it off pretty spectacularly.

And while “Immersive Van Gogh” is lovely, illuminating and thought-provoking, let’s drop the pretense for a moment: It’s a 35-minute video projected onto the walls. (And the floor, a little bit.) It’s an interesting, captivating 35-minute video, rendered in grand scale. But, reduced to the essentials, it’s watching a video.

As I left the exhibit and began to scope out the cocktail area, I overheard the reactions of a few fellow patrons. Some told the staff that the experience was “wonderful” and “excellent.” One woman, though, asked where the actual exhibit began.

She wasn’t being ironic or snarky. She truly thought what we had just watched was a large-scale preview, and the real thing was yet to come.

That confusion, to me, suggests a failure on both sides of the equation. Events such as “Immersive Van Gogh” aren’t doing enough to sell audiences on what they can actually expect. Yes, events ranging from big-ticket theatrical productions to haunted houses host F.A.Q. pages on their websites, but that’s not the same thing as making the nature of an event clear. If one patron thinks they got exactly what they paid for and another isn’t even sure they saw the thing that was being sold, you didn’t do a good job at explaining your general deal.

On the opposite side, we need a bit more discernment as consumers. Anyone can put together a convincing social-media campaign, and attracting media coverage isn’t as difficult as you might think. (Trust me.) Before we make a fairly sizable (and always non-refundable) ticket purchase on something, we should probably poke around a bit more and make sure we understand what we’re getting — and believe that the experience will be worth the investment.

If you go to “Immersive Van Gogh,” know that you’re in for a very pleasant experience and a more intimate understanding of an iconic artist. Just don’t think you’ll be wandering through a multi-faceted wonderland of stars and landscapes; you’ll be watching a very large, very artful, very well-presented 35-minute video.

That’s fine. Just know what you’re in for.

Oh, and take a Lyft. The parking is rough.