May the Fourth be with you: The “Star Wars”-themed vending machine outside of Pittsburgh Bureau Fire Station 27 has drawn fans from around the region. 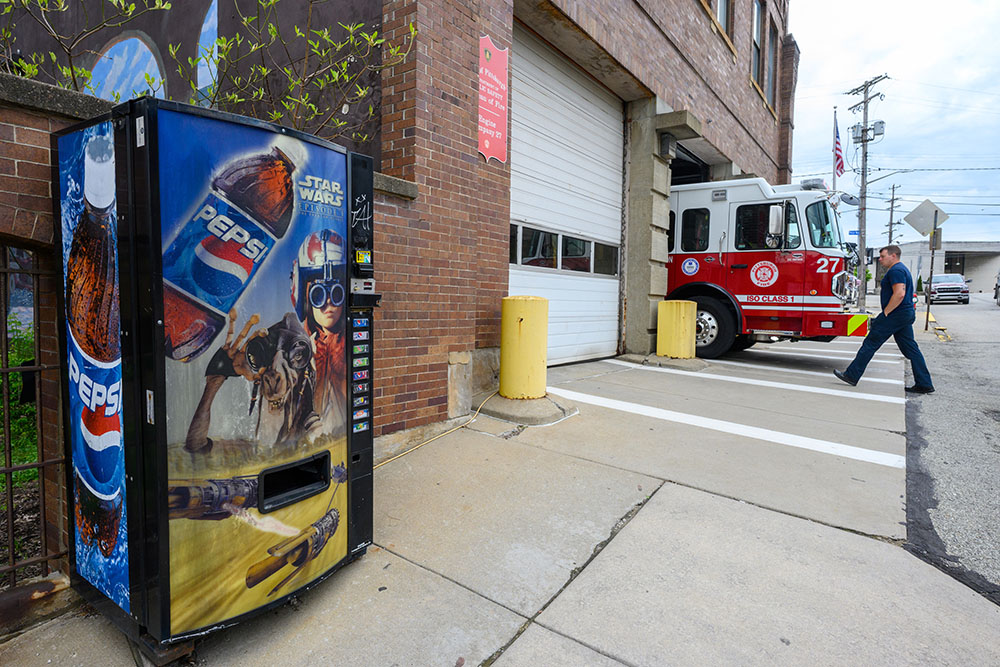 If you’ve made the pilgrimage to the vintage vending machine outside of Fire Station 27 in Mount Washington, you may have thought it had been forgotten — after all, it bears the since-retired Pepsi logo of the late ’90s and, more impressively, the likeness of a young Anakin Skywalker and other characters from “Star Wars: Phantom Menace,” which was released in 1999.

But the local landmark is anything but forgotten; in honor of May the Fourth, Pepsi announced that it will repair and restock the machine with a year’s worth of its most popular products, including Pepsi, Pepsi Zero Sugar and Mountain Dew. It’s also donating a lump sum of $10,000 to the firefighters at Station 27, who keep the machine — and the community — running.

“For over two decades, Pittsburgh Bureau Fire Station 27 has stocked the Pepsi vending machine to keep Pepsi and sci-fi fans coming back year after year to celebrate May the Fourth. With fans from all over the U.S. making the ‘trek’ to visit the vending machine, making it a must-see for Pittsburgh visitors, Pepsi is stepping in to restock and repair the vending machine, re-energizing local pride in this historic landmark enjoyed by fans and locals alike,” Pepsi said in a press release.

The machine has become something of a Mecca for “Star Wars” fans and those with an affinity for all-things retro. Earlier this year, the Post-Gazette featured an article about the machine, explaining that those who live in the area see folks coming to take selfies with it all the time. Originally installed as an ad for the then-yet-to-be-released “Star Wars” film, it has been operating, unchanged, for more than 20 years. It only takes quarters, not dollars, and the firefighters of Station 27 have been stocking it themselves, mostly with Faygo, since Pepsi originally opted not to repair it.

The machine has long been popular on social media, too. One Twitter user posted a picture of it with the caption, “Every day I’m haunted by the fact that there are still Phantom Menace Pepsi machines out in the world, AND YET I DONT HAVE ONE.” It also went viral on Reddit recently, and Business Insider’s Les Shu tweeted a picture of the artifact with the caption, “The vending machine that time forgot,” which received more than 100,000 likes.