Seven of our Favorite Dumplings in Pittsburgh

Pittsburgh, of course, is best known for the pierogi. Our love of dumplings extends beyond that, however. These seven dumplings are our favorite restaurant versions of their various styles. 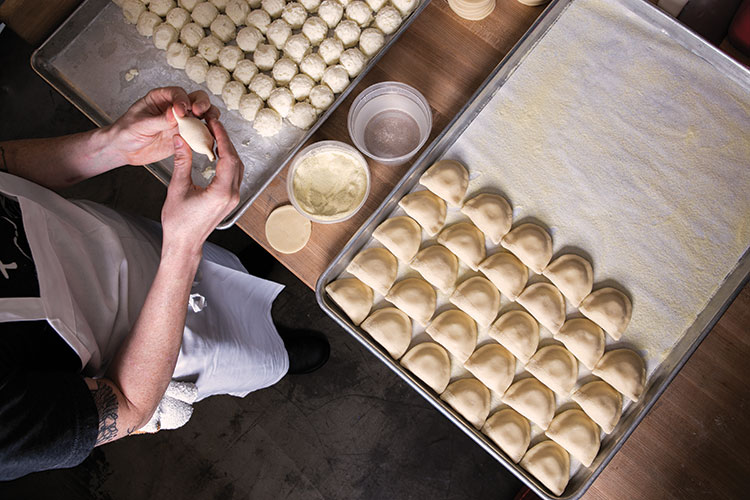 A dumpling is a “small mass of dough cooked by boiling or steaming.” That’s a fine definition for Merriam-Webster. But I prefer the way Mike Chen, owner of Everyday Noodles in Squirrel Hill, defines them. “Dumplings are thin-skinned, small and stuffed,” he says.

Chen, by the way, loves dumplings. When he was a teenager in Taiwan, he once ate 100 xiaolongbao, better known in the United States as soup dumplings, in one sitting. Respect.

Stuffed and sealed, boiled or steamed dough packets spread along the old Silk Road, the ancient network of trading routes that connected Asia and Europe. Along the way, gyoza, wonton, manti, pelmeni, zwetschgenknödel and ravioli all found places in the hearts and minds of their geographies.

Pittsburgh, of course, is best known for the pierogi. Our love of dumplings extends beyond that, however. These seven dumplings are our favorite restaurant versions of their various styles. 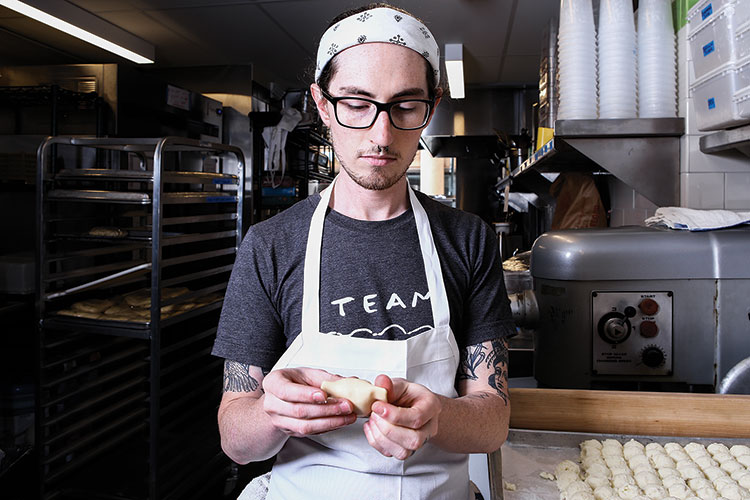 Celebrating the pierogi isn’t unique to Pittsburgh. No other city, however, seems to love the Polish dumplings as much as we do; costumed pierogi even battle for glory after the fifth inning of Pittsburgh Pirates home games. Naturally, it’s tough to choose a favorite. 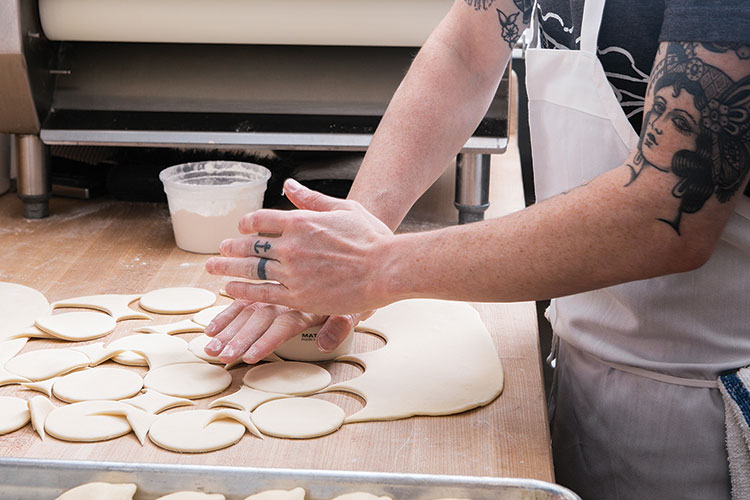 What we love about Butterjoint, in addition to the perfectly browned-in-butter finish of the previously boiled packet, is you have the option to follow tradition with a straightforward pierogi filled with airy potato and cottage cheese plated with caramelized onion and sour cream, yet also get something that breaks with tradition in a way that seems, well, traditional. 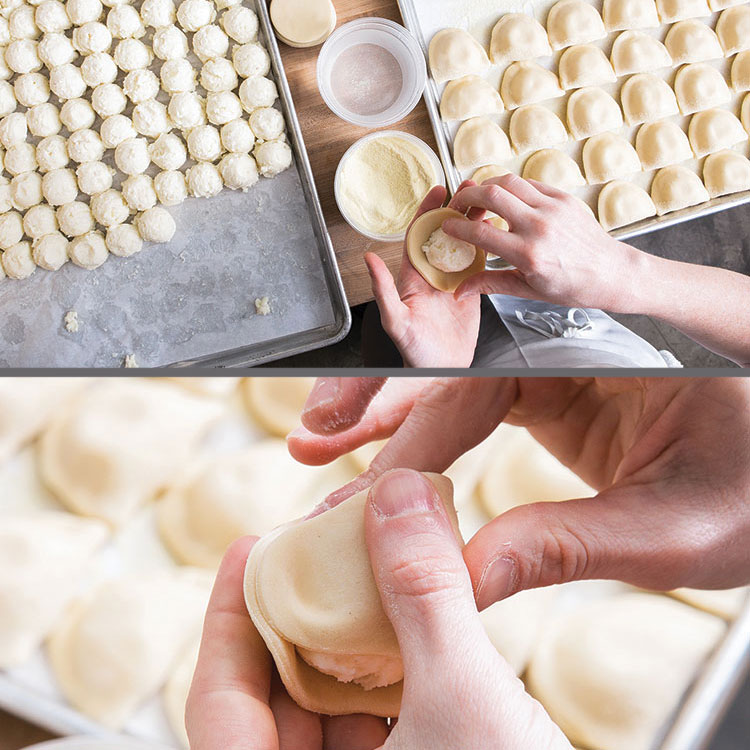 At certain times of the year, kimchi substitutes for sauerkraut and goat merguez for kielbasa, yet the plate always feels rooted in Pittsburgh. Executive Chef/Owner Trevett Hooper and his squad work as a team every Monday to prepare the week’s haul — he says the crew makes anywhere between 500 to 700 per week, depending on the time of the year. 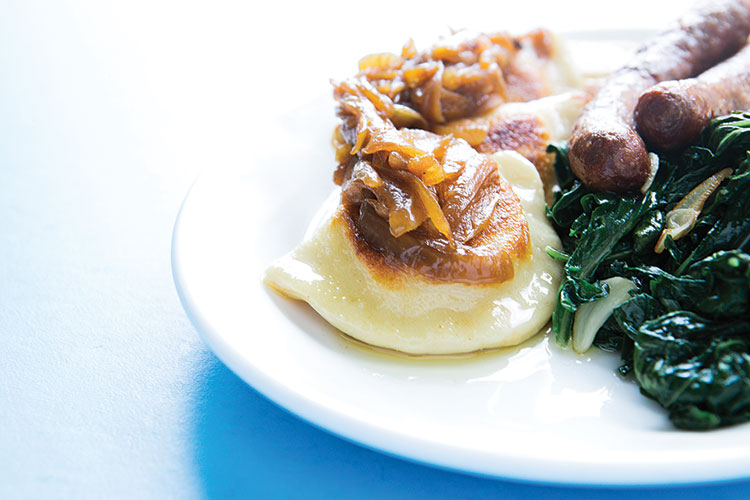 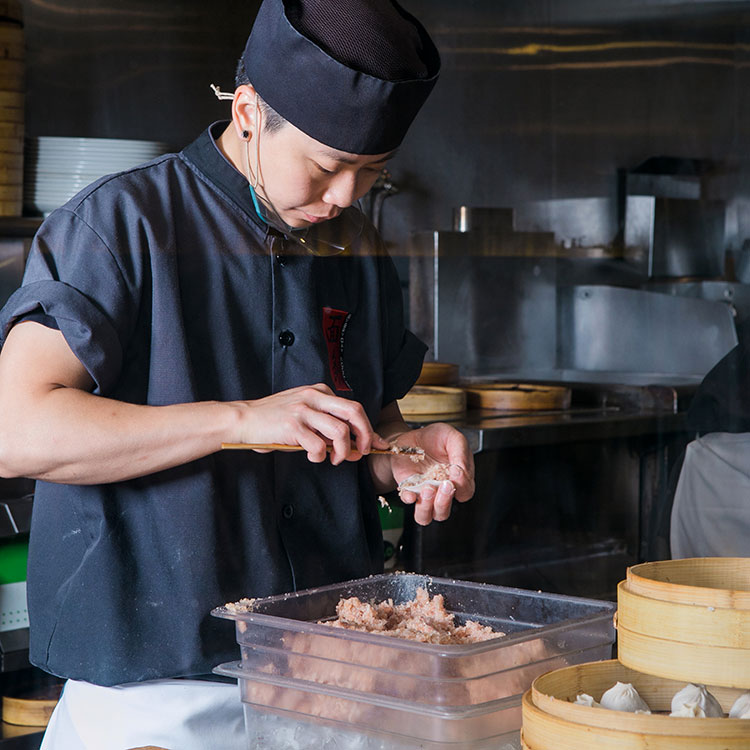 It’s believed that xiaolongbao originated in the mid-1800s in a suburb of Shanghai. The delightfully juicy dough purses weren’t well-known in the United States until 1995, when a restaurant called Joe’s Shanghai opened in Flushing, N.Y. 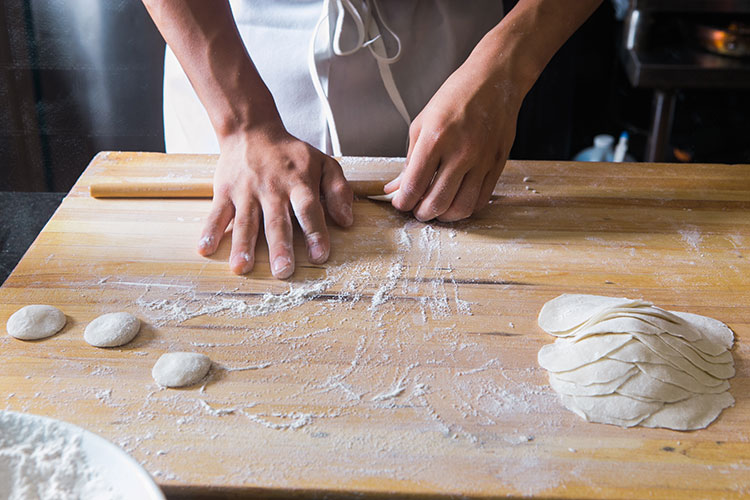 The crucial component of xiaolongbao is a fatty meat stock that gelatinizes at room temperature. Cubes of the soup jelly are mixed with ground pork, though crab and shrimp (or a combination of those) fillings also are typical. 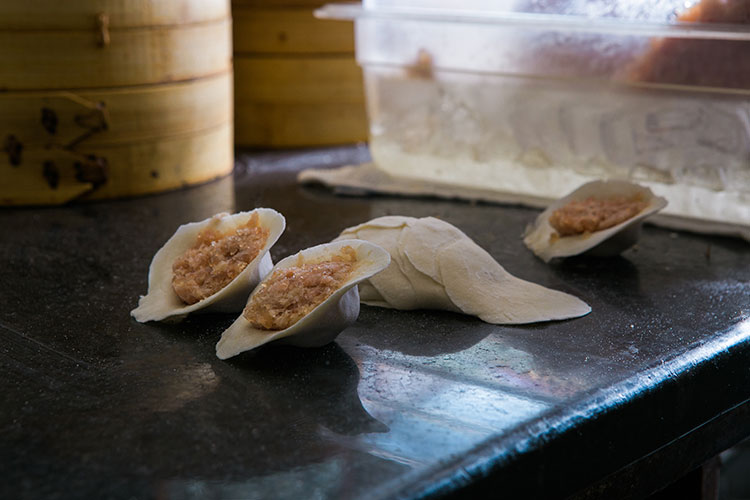 Mike Chen brought xiaolongbao to Pittsburgh in 2013 when he opened Everyday Noodles in Squirrel Hill. Chen says that he has three staff members on weekdays and four on weekends devoted to soup dumpling preparation. 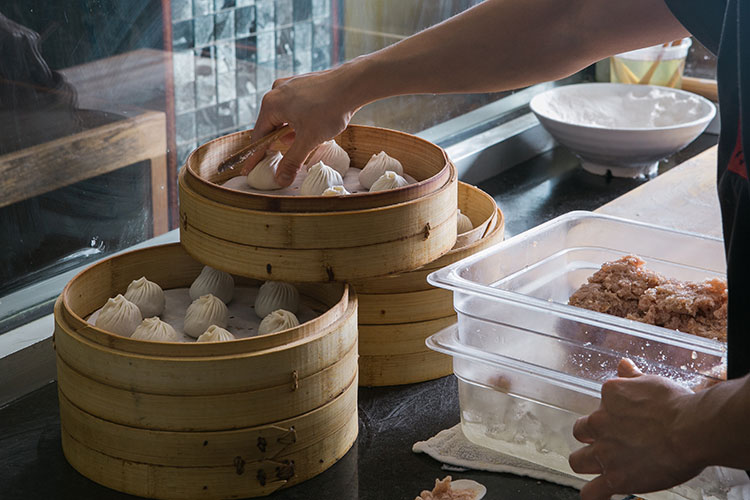 The secret to his lighter xiaolongbao is to forgo pig skin in the making of the stock, instead using a combination of giant pork bones and chicken feet. My favorite way to eat a soup dumpling is to poke a small hole in the side of the skin, gently slurp a bit of the stock and then add a dollop of black vinegar and a sliver of ginger to cut through the richness. 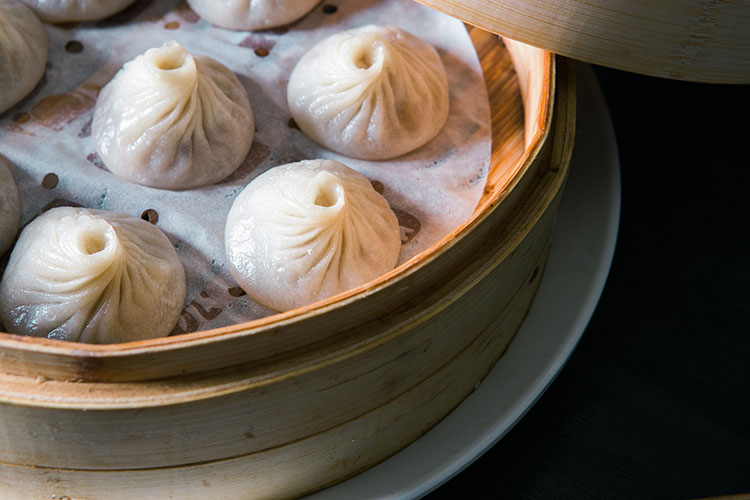 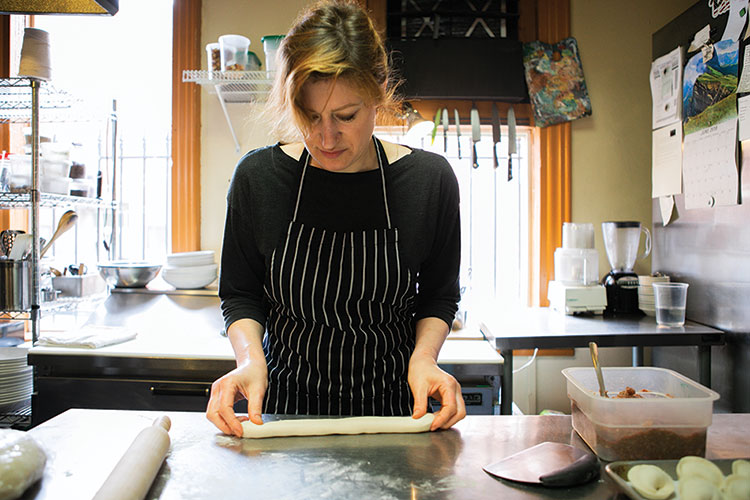 It’s believed that the Mongols introduced what would evolve into the pelmeni when they occupied Siberia in the 13th century. When Russians moved into the region in the 16th century, they too adopted the dumpling as part of their diet. Pelmeni’s thin skins are a simple, well-kneaded mix of flour and water, but their stuffing can contain a variety of meats and even fish or mushrooms. 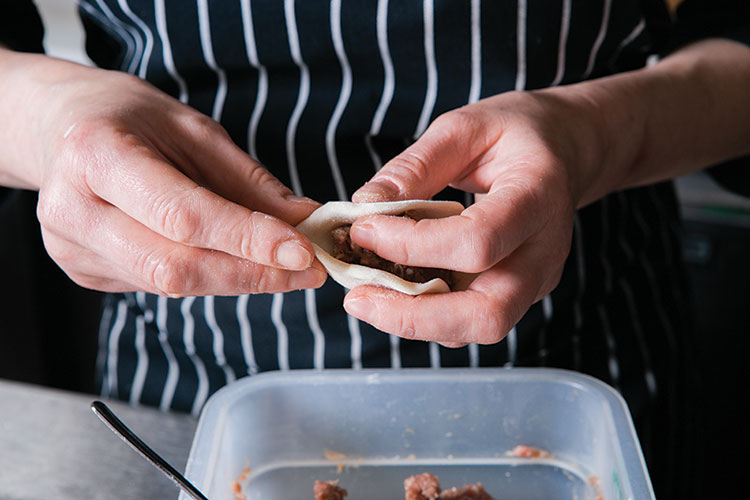 Lola Bistro co-owner Yelena Barnhouse says that “every Siberian woman has their spin. It’s just like borscht.” She grew up on a pig farm but decided that she had enough of pork-filled dumplings when she left Siberia. At Lola, she and her husband, executive chef Michael Barnhouse, prepare a mix of beef, lamb and onions once a week. In Siberia, pelmeni are preserved by tossing bags out the window and into the snow. 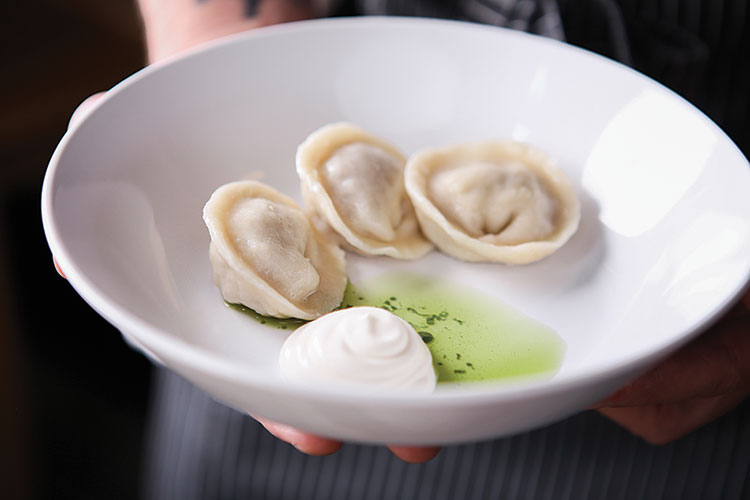 At Lola Bistro, the juicy, ear-shaped packets are kept in the refrigerator or freezer before being boiled in salt water and served with a dollop of sour cream and a spoonful of scallion oil. 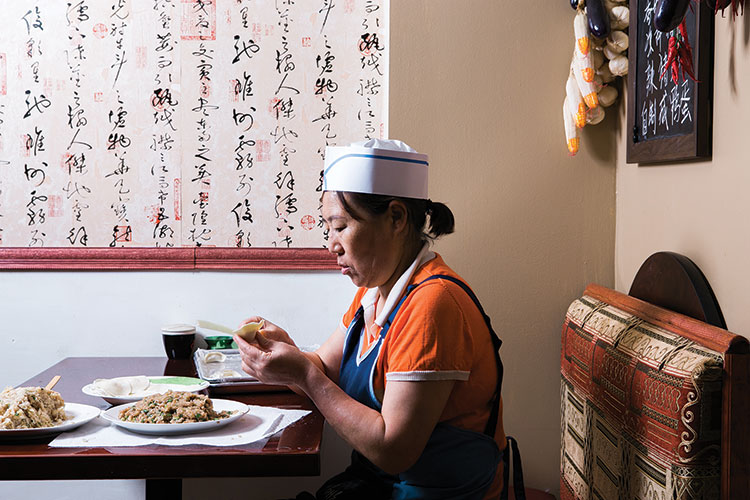 Pickled cabbage is as essential to the cuisine of Dongbei, China’s northernmost region, as it is to the sauerkraut makers of eastern Europe. It’s so integral to the cold-weather foodway that it’s mixed with chopped pork and served as the go-to celebratory food, suan cai jiaozi, during Chinese New Year festivities. 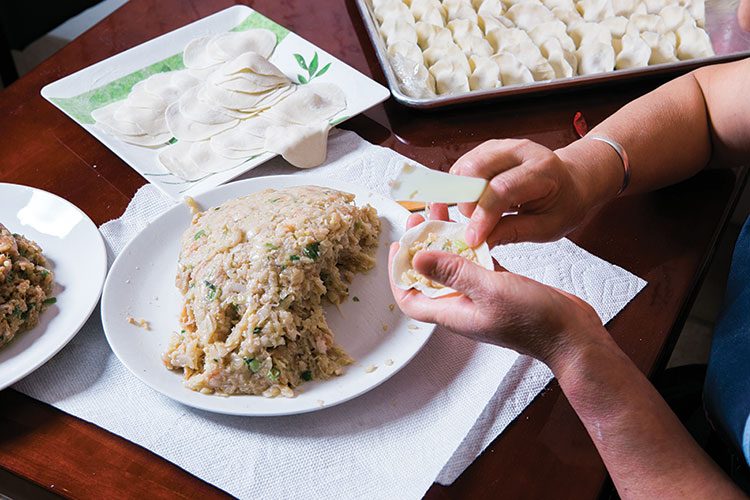 At Northeastern Kitchen in Squirrel Hill, it’s always a celebration thanks to chef You Shan Pei and his team. Several times per week, Pei kneads flour and water until it’s soft and smooth, rolls it into a cylinder, divides the roll into small pieces and presses the wrapper until thin. 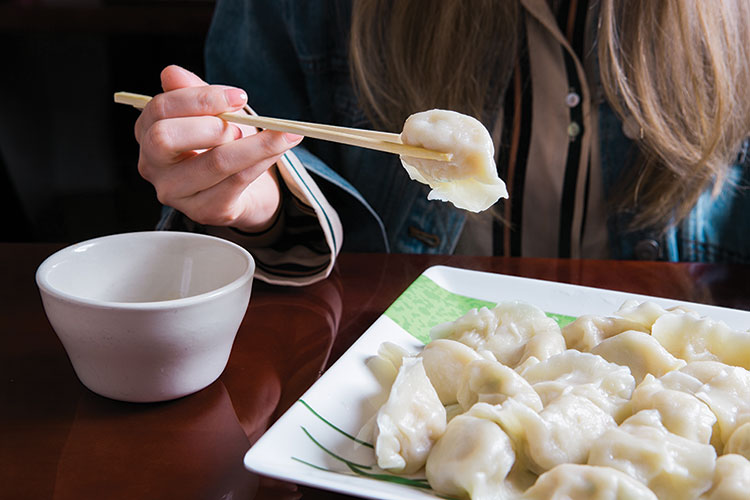 It’s filled, crimped and boiled before serving with a simple vinegar dipping sauce. It’s a juicy treat with a slight hint of fermentation. 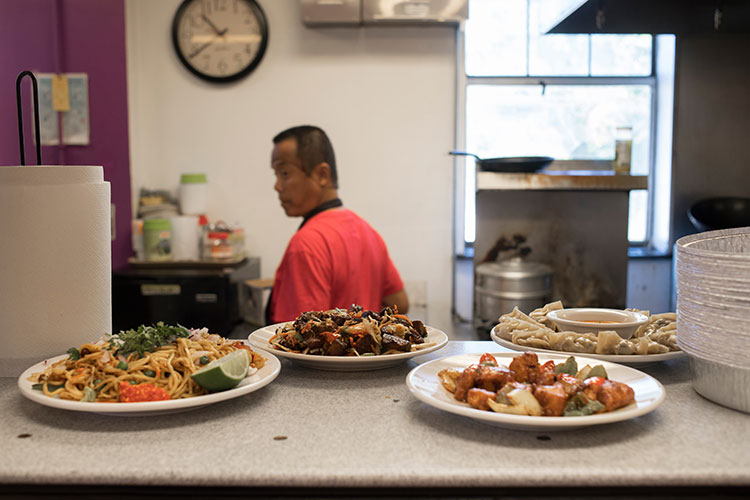 Momo, steamed flour and water dumplings crimped into the shape of a crescent moon, is Tibetan in origin but also a critical component of Nepali cuisine. The dumpling can be filled with a range of ingredients — mutton and yak are endemic to the region, but chicken, pork and vegetables also are favorites — mixed with onions, ginger and cilantro. 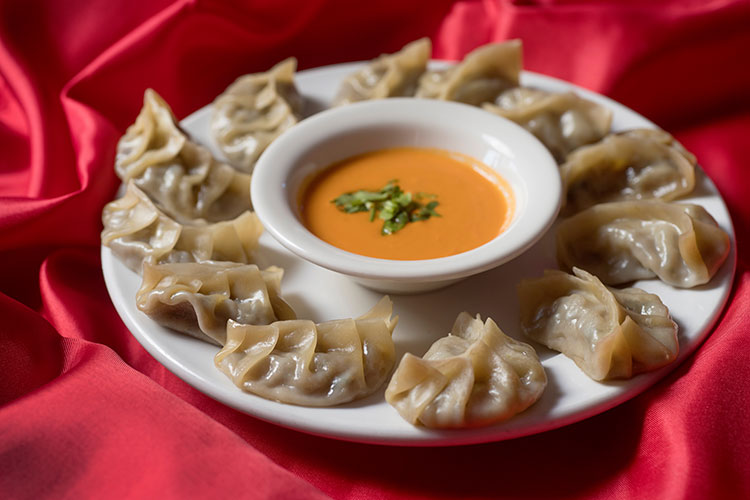 The best momo in Pittsburgh is served at Nepali Asian Restaurant in Carrick. Owner Uttam Tamang, a naturalized citizen who came to the United States as a refugee from Nepal, says his chef prepares more than 1,000 momos per week. Juicy chicken momo is popular, but I also recommend the vegetable momo — cabbage, carrot, cilantro and red onion. 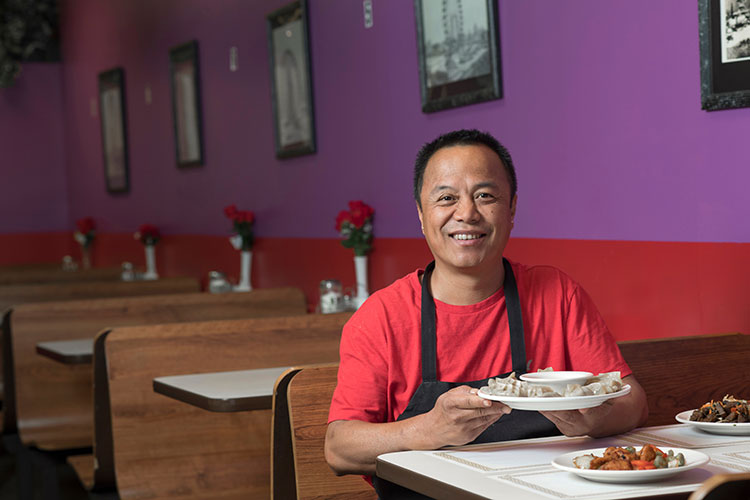 The house-made achar, a dipping sauce of ground white sesame seed, tomato, ginger, cumin and cayenne, is a delightful and slightly spicy foil for the rich dumplings. 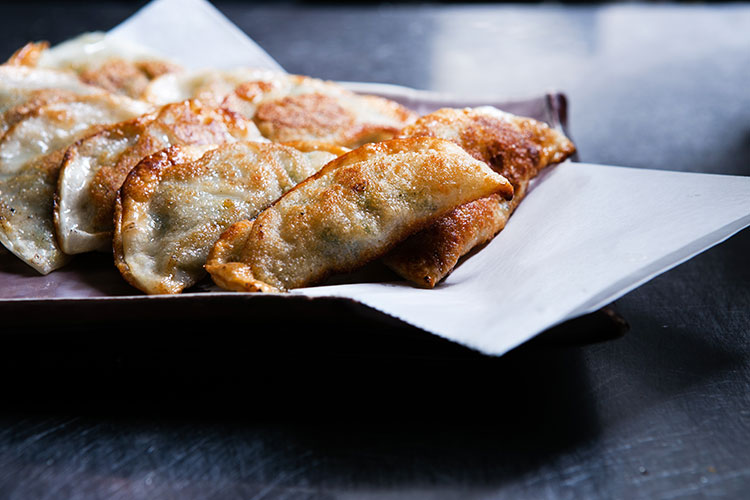 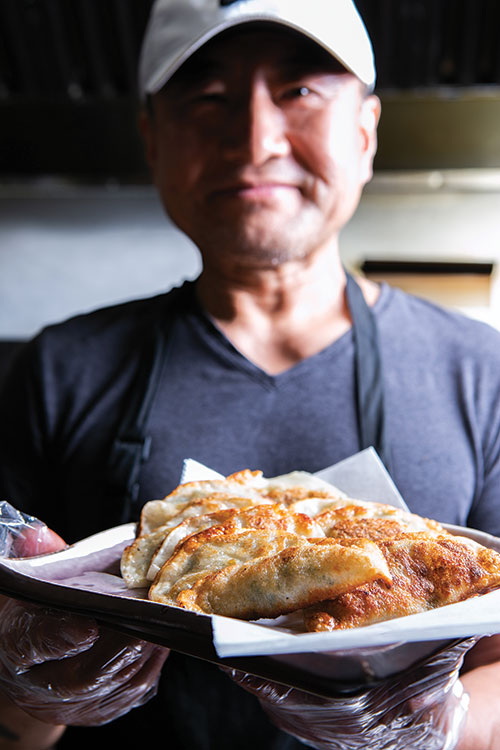 Mandu is Korea’s version of the pot sticker and is believed to have been made on the Korean peninsula as early as the 14th century. It shares similar traits to the Chinese version — thin circles of dough stuffed, pinched into a half-moon and then steamed or boiled. At Nak Won Garden in Shadyside, owner Yank-Suk Beondy, her daughter Christina Beondy, the restaurant’s chefs and a couple of friends spend a day every two months or so preparing up to 3,000 mandu. They stuff wrappers with a blend of beef, pork, tofu, chive, cabbage, garlic and sesame, and then par-boil and cool the dumplings before freezing. Get them pan-fried for a tasty juxtaposition of crispy, tender and meaty.
5504 Centre Ave., Shadyside; 412/904-4635 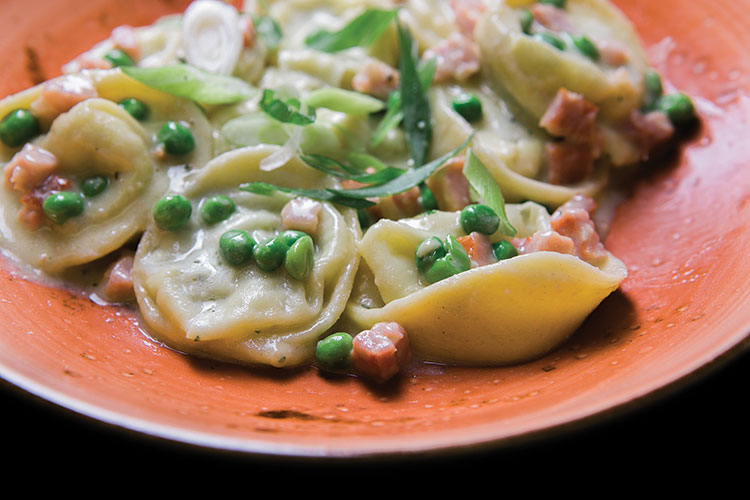 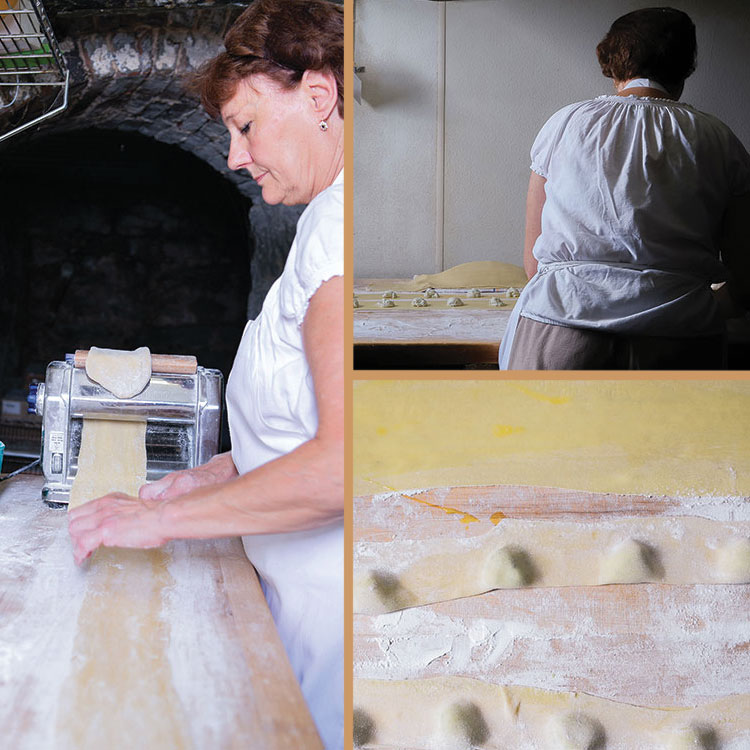 Pasta selections at Piccolo Forno vary with the seasons, but there are a few standbys — including ravioli and its near-cousin, tortelli; she will shape around 400 per day in the restaurant’s basement kitchen. Ravioli rank among the best-known dumplings in the United States, with a longstanding place on nearly all Italian-American restaurant menus, though the history of the stuffed pasta goes back to at least the 14th Century in Venice. Ravioli are made by kneading egg and flour, then rolling the dough into long, thin sheets. Fillings such as meat, spinach, cheese and squash are dolloped at regular intervals and then the long sheet of pasta is draped over itself to cap the filling, gently pressed to expunge any air. The pasta maker cuts the sheets into squares, leaving space around the margins to give each square extra room to soak up sauce.

This article appears in the August 2018 issue of Pittsburgh Magazine.
Categories: Eat + Drink Features, From the Magazine, Hot Reads