Our 50 Years: The First Best of the ‘Burgh List

In 1978, a future CNN bureau chief wrote our inaugural best-of feature — and, surprisingly, many of his picks are still available today. 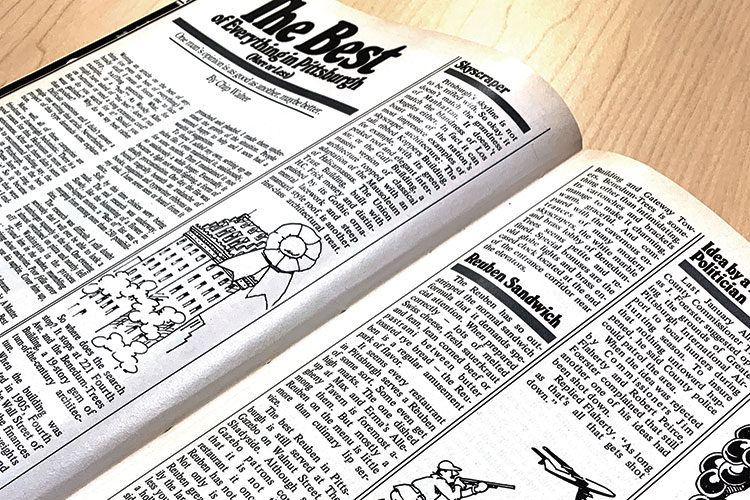 Our very first “Best of the ’Burgh” choices, published in August 1978, did not take into account the voices of thousands of readers, as this year’s selections do. Nor did they represent the accumulated selections of our staff and guest curators.

There was just one guy.

To be fair, it was a talented guy: author Chip Walter, who has gone on to roles including CNN Bureau Chief, National Geographic Fellow and more. Nevertheless, he opened “The Best of Everything in Pittsburgh (More or Less),” a name I’m glad we swiftly shortened, with a word on how exhausting it can be to have one man evaluate a whole city.

“The research was difficult,” Walter wrote. “I still doubt seriously that I will ever be able to look a hamburger squarely in the bun. One evening I almost overdosed on pizza and nearly fell off Mt. Washington in the process.”

I would’ve assumed that none of Walter’s choices could be replicated today; even in a city with a long memory, purveyors of reuben sandwiches (the nod went to the bygone Gazebo on Walnut Street) and hamburgers (C.J. Barney’s in Oakland, also extinct) tend not to hang around for 40-plus years.

Yet I was pleasantly surprised to find that three of the ’Burgh’s best 1978 offerings are still available — in Market Square alone.

Market Square’s Nicholas Coffee Co., which celebrates its centennial this year, got the nod for Best Coffee; Walter cited “16 varieties from Mocha Java to Viennese with Cinnamon,” which I’m sure was an astounding number of coffee options in 1978. The race for Best Fish Sandwich, ever a competitive one, was first won by the Oyster House Bar (now the Original Oyster House). “Attribute it to the way the fish are deep fried, the homemade hot sauce or the belly-up-and-have-a-shot atmosphere,” Walter said, “but a fish sandwich never tastes quite so good as it does at the Oyster House.” Many would still agree.

Fun fact: For the price of one of those sandwiches today, you could’ve bought 9 of them back then. Actually, I guess that fact is not precisely fun.

Walter also sang the praises of our city’s most famous foodstuff long before it became a nationwide cult hit. “Any Primanti sandwich will throw your palate into overdrive and take your taste buds out on the high side,” he said, declaring the capicola with everything the city’s Best Sandwich. “It is for the hedonist, pure and simple.”

That Market Square trio does not even represent the full range of legacy choices that made the cut. Oakland’s frankfurter landmark was honored as well: “None match the standards set by Original Hot Dog on Forbes Avenue in Oakland where the frenetic atmosphere of old-fashioned short-order cookery survives today.” It would continue surviving.

As would Bloomfield’s Pleasure Bar, which received our inaugural nod for Best Pizza. There’s an impressive amount of stuff-that’s-still-there in our first “Best Of” feature, but I suppose that makes sense. In many ways, we were establishing what would be the city’s culinary canon — helping to build the reputations that would endure decades later.