Opportunity Knocks in One of Pittsburgh’s Up-and-Coming Neighborhoods

A remodeled, three-story house in Sheraden is part of the West End’s renaissance in the real estate market. 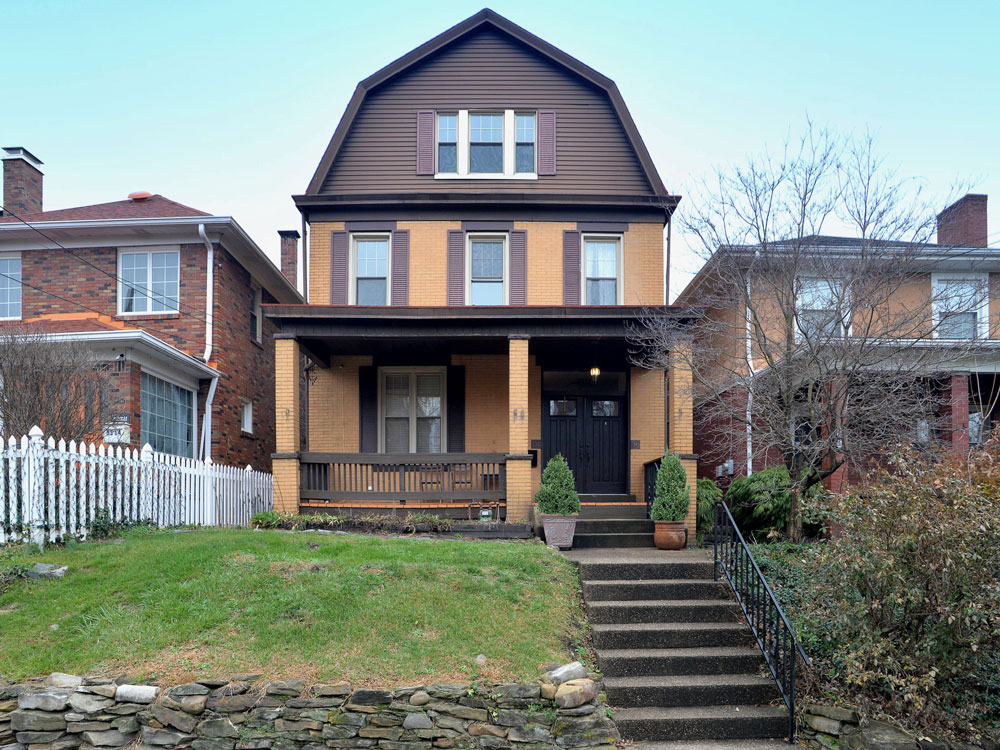 Once plagued by blight, Sheraden in Pittsburgh’s West End neighborhoods is finally making its mark on the region’s real estate market.

“People who have options are [choosing] to move to Sheraden now,” says neighborhood developer Kelly Carter, who grew up in Sheraden. “That was not the case five years ago. It happened really fast — just like in Lawrenceville.”

Carter says she became an accidental developer almost 15 years ago, when the neighborhood was going through a period of severe deterioration.

“My mom didn’t want to leave the neighborhood, so I bought the house next door to hers and then started to buy all of the houses around her that were in bad shape,” she says. 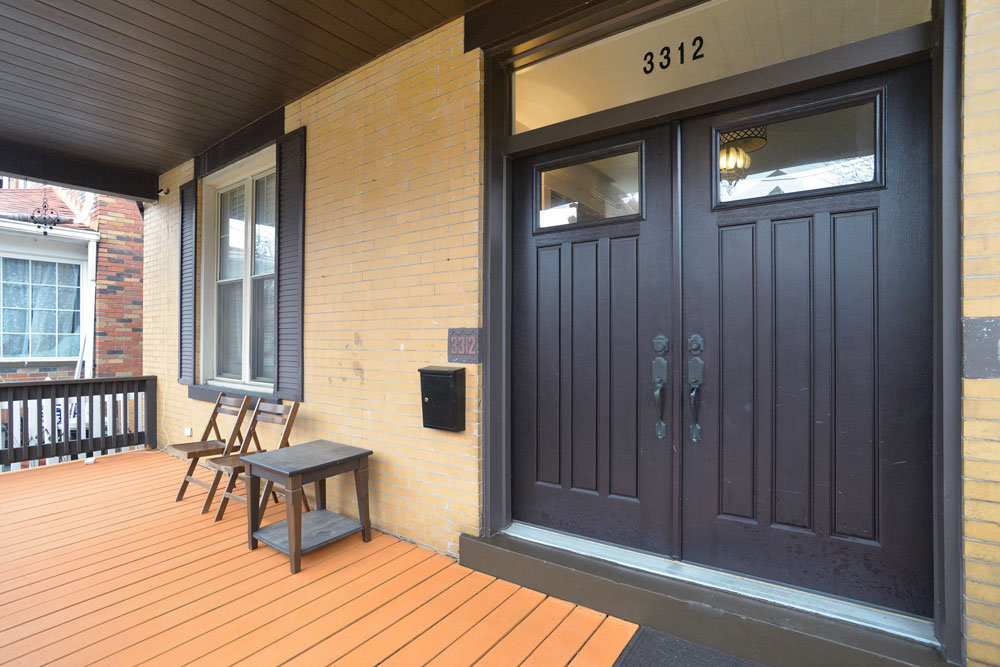 Without any real equity at the time, Carter cleverly created an unconventional opportunity to begin her real estate journey.

“I bought houses from the owners who had inherited them, or just didn’t want them anymore,” she says. “I would say to them, ‘Hey, I’ll give you $300 a month.’”

Because the houses were selling for around $15,000 at the time (and because she was planted in the neighborhood), Carter says sellers accepted her offers. After her third such purchase, Carter had enough equity to approach a bank and secure a conventional loan to move forward with other sales.

“Sheraden was in bad shape back then,” she says, noting the neighborhood was dealing with a crime wave that seemed to centralize in the local park. 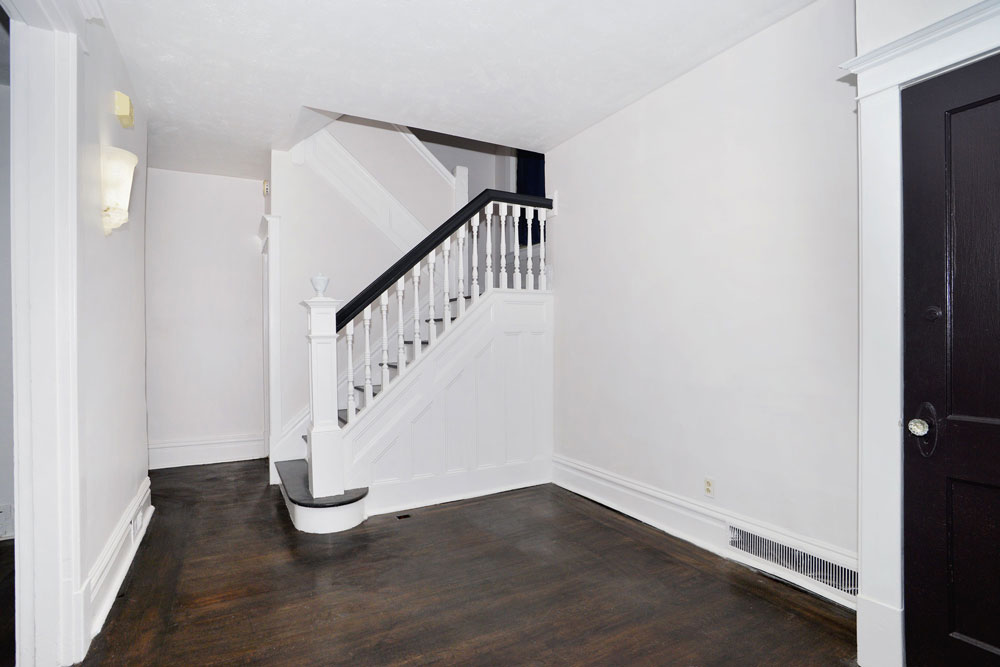 Things have all since changed for the better, and Carter says she started using the investment houses as Airbnb properties. The business move proved successful; renters liked to stay in that part of town as it was an easy commute to Pittsburgh’s airport — and it cost half of what they would pay in Bloomfield or Lawrenceville, Carter says.

Carter adds she already was familiar with the Francisco Street home, once owned by a pastor who was reassigned to a church outside the area, when she bought it.

“When I was a kid, I would get a ride to school with kids that lived there, so there was a lot of history with the house,” she says. “I thought it would be cool to own it.”

Built in 1909, the home sits on a quiet street near Sheraden Park. Carter installed an aggregate walkway and new front steps as well as a custom metal railing fabricated in McKees Rocks.

The porch, which includes a new floor, is wide and roomy; the original tongue-in-groove ceiling is still intact. It’s accented by wood shutters that help make it a charming place to relax before entering the house. 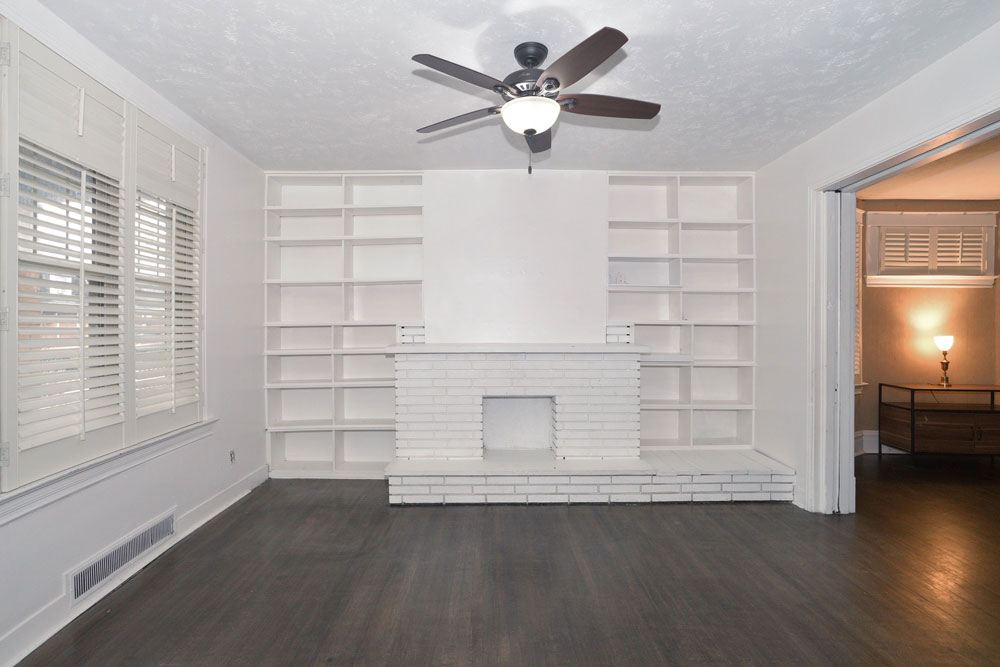 Carter recalls there once was a single front-entry door that looked out of place with the home — a problem she rectified by installing a double-entry door. With inset panels and high-set glass, plus a glass transom, the door has a modern, transitional style that aligns with the home’s original design.

Inside, the home has original wood trim, baseboards and wood-panel doors, complemented by refinished hardwood floors and fresh paint. Featuring a lighted wall sconce, the roomy entry hosts a closet and a white, panel-front staircase with the original wood spindles.

Carter did some work in the family room, installing shelving that flanks the center fireplace. Custom plantation shutters in crisp white enclose all the first floor’s windows. The dining room features an open-arm chandelier, built-in bookcases with teal accents and a decorative fireplace topped with the original mantel. 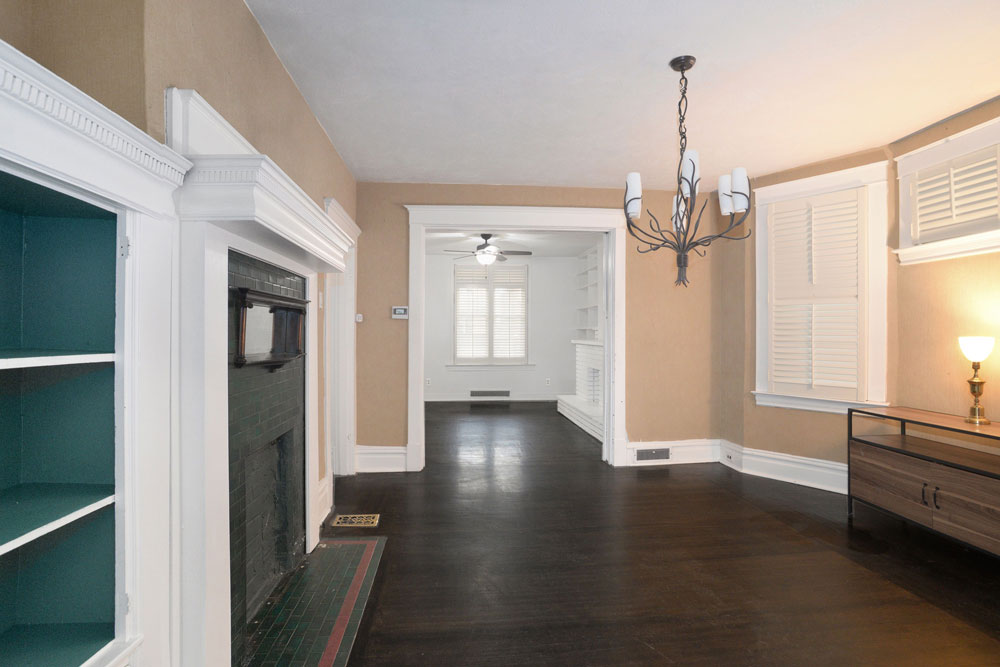 “That house deserves a grand kitchen,” Carter says. “It is a postage stamp sized kitchen — that is a downside.”

The second floor’s three bedrooms and a fully renovated bathroom are all spacious and bright. With its painted floor, wainscoting and attractive trimwork, one of the bedrooms would make a pleasant office. The other two bedrooms each have new carpeting.

Carter converted the home’s third floor to a guest suite.

“The idea was to put a nanny/granny apartment on the third floor. It is part of the house,” Carter says. “We had a friend rent that and the rent paid our mortgage.” 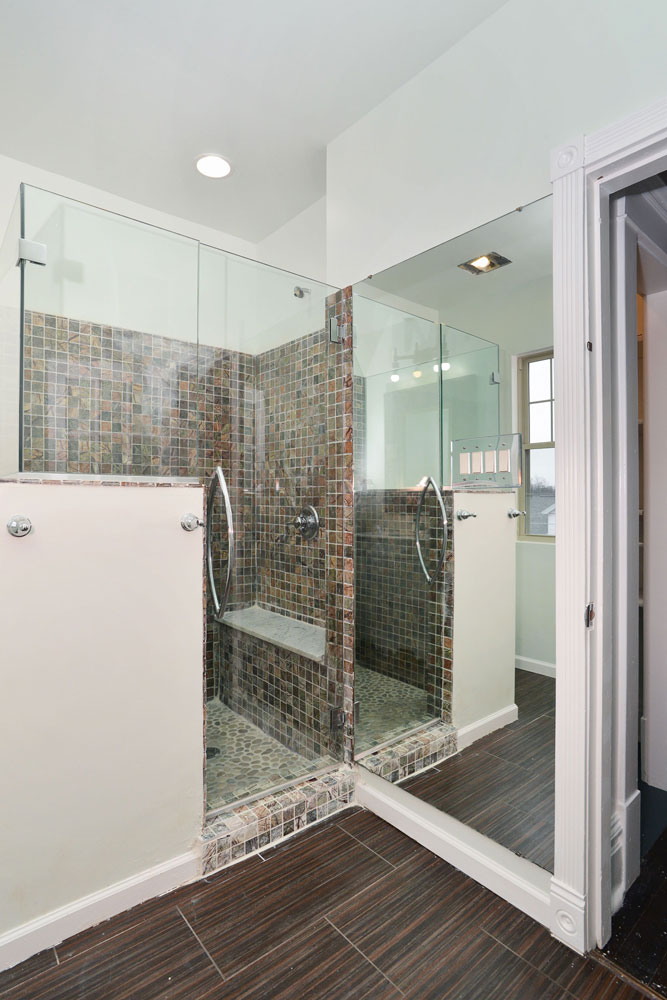 The roomy third level’s floors are painted a dark teal with light gray walls. A kitschy red metal sink base with a white sink adds a pop of color to the basic kitchen, which is rounded out with white appliances. The remodeled bathroom is a flip on the color scheme and has black-and-white encaustic tile, teal walls and white fixtures.

In the basement is a lot of usable space.

“I had a record store in the Strip and moved it to that basement and ran it from there for six years,” Carter says. “The basement is dry; I had a computer and office set up down there.”

The home also has off-street parking in back and a fenced-in yard. 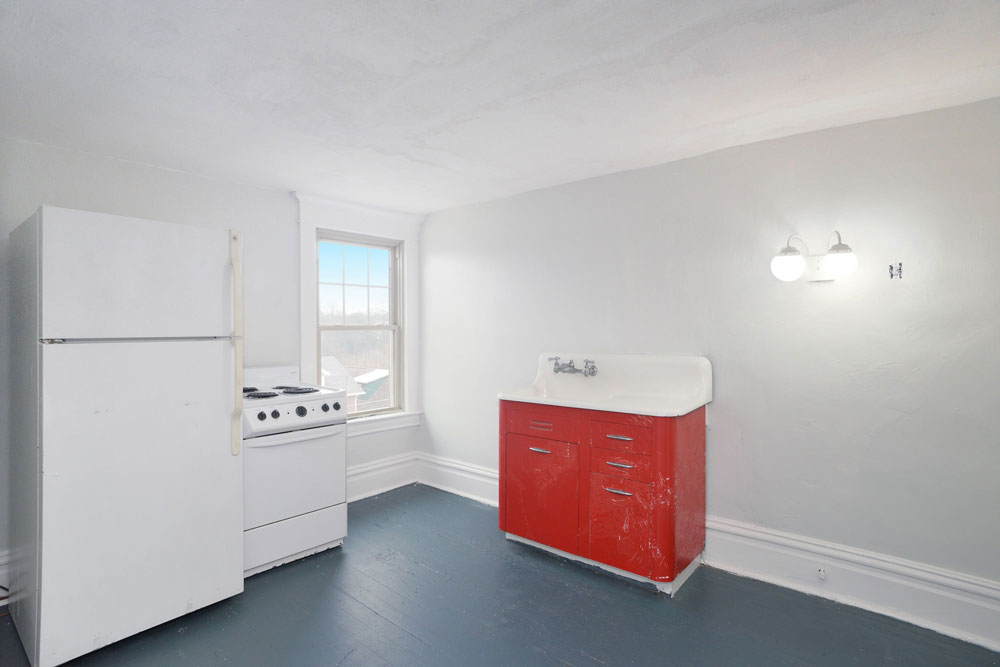 A Neighborhood in Transition

Sheraden is considered a Census Tract Development Zone, meaning it is eligible for special lending programs for lower moderate income or first-time homebuyers.

“The programs are offered through banks because they get tax credits; they are low-to-moderate-income households,” says Realtor Regina Mungo, who is well-versed in the program’s operating procedures. “In Sheraden, the program is targeted to households that make 80 to 85% of the Average Median Income and can qualify for low-to- no-down payments on their programs.”

Mungo notes she is always hearing from buyers who wish they would have bought in trendy neighborhoods such as Lawrenceville or East Liberty before the boom hit.

“The West End is that neighborhood,” she says. “It is the last large neighborhood tract within a 4-mile radius of the city core.” 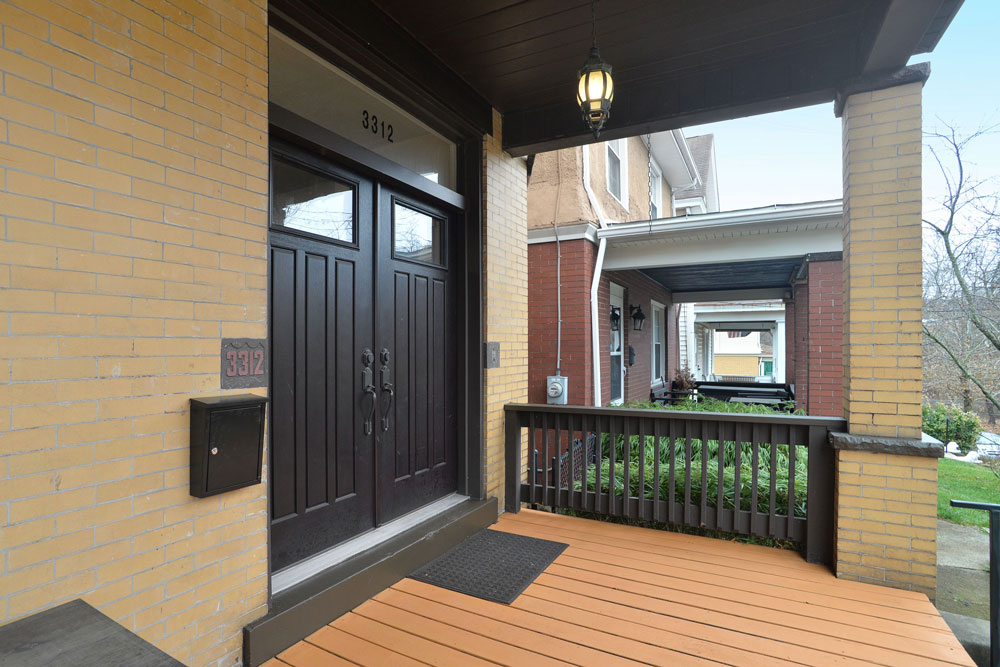 She also points out the nearby Esplanade Development, which is slated to bring a Ferris wheel, splash park, marina, ice skating rink and housing project to Pittsburgh’s North Side, will make Sheraden even more valuable.

“In Sheraden, there are a lot of rehabs going on,” she says. “I have been trying to help homeowners get their hands on the properties before they get gobbled up by investors.”

Carter adds she previously bought homes in the neighborhood for between $10,000 to $20,000, invested $80,000 in updating them, and then wouldn’t be able to recoup the cost when she attempted to sell them.

“I knew that, and it was a really risky thing, but I just thought I would make some rentals and see what happens,” she says.

About:  Sheraden
Population: 4,593
Planes, Trains & Automobiles: A 20-minute commute to the airport. Daily transport via Pittsburgh Regional Transit. Rideshare, street parking and bus lanes.
Schools:  City of Pittsburgh (pghschools.org)
Neighborhood: Surrounded by Esplen, Chartiers City, Crafton Heights and Windgap, Sheraden is an integral part of the city’s West End neighborhoods and has been undergoing a renaissance. In 2020, Pittsburgh’s Department of City Planning completed the Sheraden Park Master Plan, which prioritizes the park’s ecology, improves access and park visibility and provides new amenities to the community. The neighborhood’s council is active, and residents are supportive of many youth programs, among them Boy Scouts and Girl Scouts, softball, baseball and football.