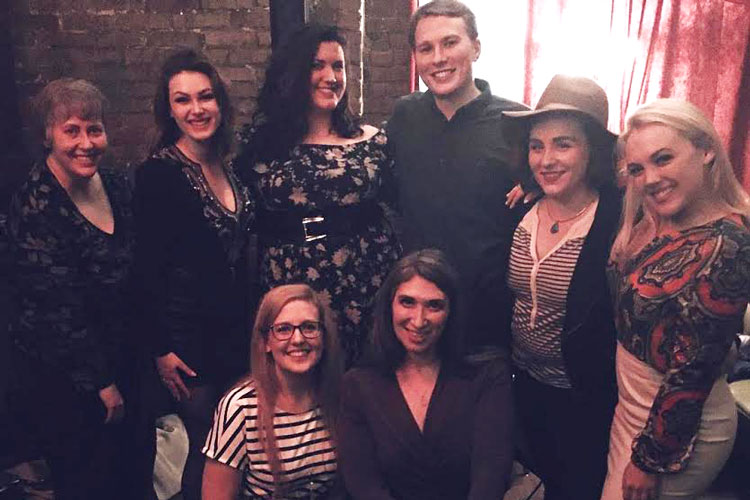 Dinner and a show is a pairing as classic as wine and cheese, but what about a drink paired with an operatic performance? The performance group Opera on Tap is here to give you a taste of opera for the price of a glass of wine.

Traditionally opera has suffered from a reputation for being an entertainment form only enjoyed by the monied classes. Opera on Tap seeks to show the public that opera isn’t a stuffy art. “We want it to be accessible to everyone,” says Devan Mercurio, soprano and managing director.

The Pittsburgh chapter, founded by Kathryn Ambrose Sereno and Jenifer Weber in the fall 2017, is part of a non-profit international organization that seeks to provide young singers with opportunities and educate the public about culture and the arts. It began in Brooklyn in 2005 and has since grown to include chapters around the world. Pittsburgh’s Opera on Tap performed its first gig at Hambone’s Lawrenceville and then moved their monthly performances to the Allegheny Wine Mixer in Upper Lawrenceville.

“We love working with Allegheny Wine Mixer. Jamie [Patten, the owner] gets excited and often creates a themed cocktail for us. We love the space,” says Weber.

Performances are comprised of selections from different operas, often encompassing a theme. Each singer in the group gets a chance to perform a song or two of their choosing. Weber has been focusing lately on revisiting French art song, which are compositions that were typically sung in salons and parlors and singers often used to learn or practice the basics of style and skill. Although Weber is an experienced singer and performer she finds value in revisiting these kinds of composition to hone her craft.

“We kind of hajack the audience with it. We’re not a quiet group of people. We want people to enjoy the performance but not feel like they have to sit silently while doing so. Come, talk with your friends and listen to some music,” says Mercurio.

For young singers, Opera on Tap is a chance to practice and hone songs for auditions and performances. For a young singer who has yet to specialize in a vocal type or style, this more informal performance setting is ideal for exploring their style and perfecting selections. Mercurio, 25, recently assumed her role as managing director, is adamant that the more practice performing young people can get, the better off the art of opera will be in the future.

Opera on Tap performs every third Tuesday at 8:30 p.m. at Allegheny Wine Mixer. Mercurio and Weber also are performing at the Distrikt Hotel Downtown on August 24 from 6-8 p.m. in the bar, Evangeline. This will be the group’s first pilot Operatic Happy Hour.