Now called POGOH, the company will soon offer e-bikes and new pedal bicycles for use throughout the city. 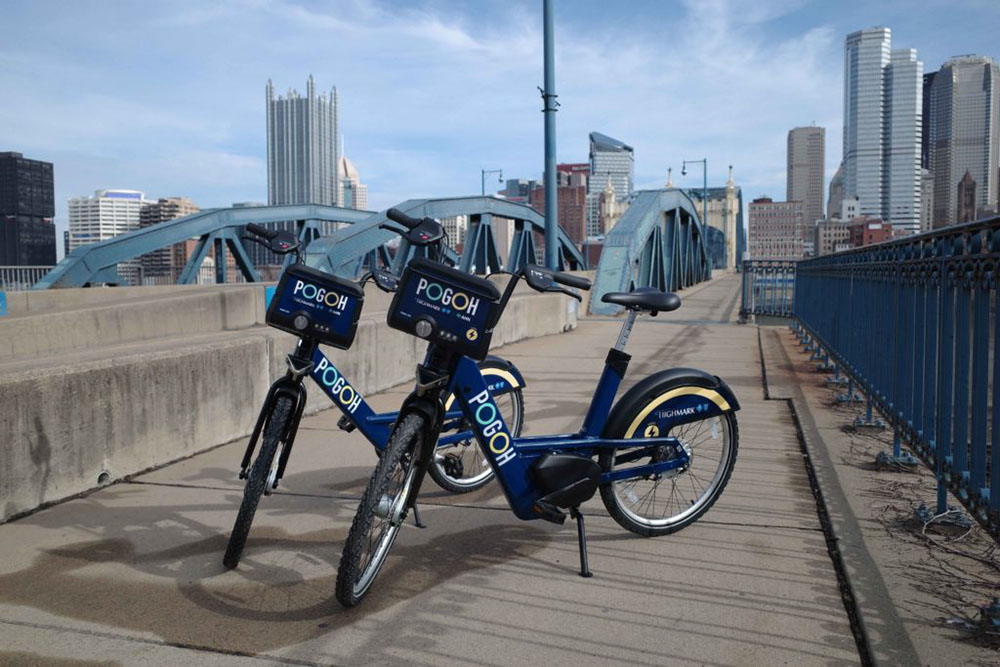 Healthy Ride Pittsburgh has a new name — and a new look.

The bikeshare company unveiled its new branding earlier this week at Highmark Stadium; now called POGOH, it includes new bikes with a lighter frame, three gears, a basket, an adjustable seat and more. Half of the fleet will soon be electric assist bikes, or e-bikes, which can give riders a boost up Pittsburgh’s many hills, the company said.

In December, Healthy Ride began removing some of its bike kiosks and stations, calling it a prelude to bigger and better things. Among those things was the promise of new bikes — both pedal and electric assist — and improved docks at which to park them. Both of these things will be delivered in POGOH’s first phase, scheduled to launch in the coming weeks.

One of the biggest changes with the new system will be that POGOH is completely station-based. Unlike the older Healthy Ride bikes, POGOH’s bikes must be returned to an open dock at an official POGOH station.

The company says its team will operate seven days a week to ensure there’s dock availability at all of its stations, but if a station does fill up, riders cannot return it to that station; they must find a nearby open dock at another station. There are no cable locks on the new bikes, and so the company says riders may not leave bikes unattended during their trip or at overflowing POGOH stations.

Riders will also have to create a new account with POGOH, as existing Healthy Ride accounts will all expire on May 15. POGOH will also feature new pricing and membership plans that the company says are designed to make bikeshare more accessible to more people for different kinds of trips.

Once POGOH officially launches, there will be 38 stations for both pedal and e-bikes, which will be able to be rented and returned at any station in the network. Its e-bikes won’t have a throttle like some models do, so riders will still have to pedal to keep the bike moving. During phase two, 27 additional stations will be added, pending additional funding.

For a map of phase one and two station locations, check out the company’s website.

The e-bikes will charge on-site at POGOH’s electric stations throughout the city. The company’s operations team will also be able to switch out batteries on the bikes right at the station to make sure they’re consistently charged and available to riders.

The team is still waiting on “some key station components” to arrive via freight, and says it’s unable to announce an official launch date until it knows for sure when the equipment will come in.

“Global shipping is a serious challenge right now, but we sincerely appreciate everyone’s patience,” the company said in a press release. “We’re confident that the end product will be worth the wait.”