Longtime television fixture B.J. Novak has promise as a writer/director, but this dark comedy never quite comes together. 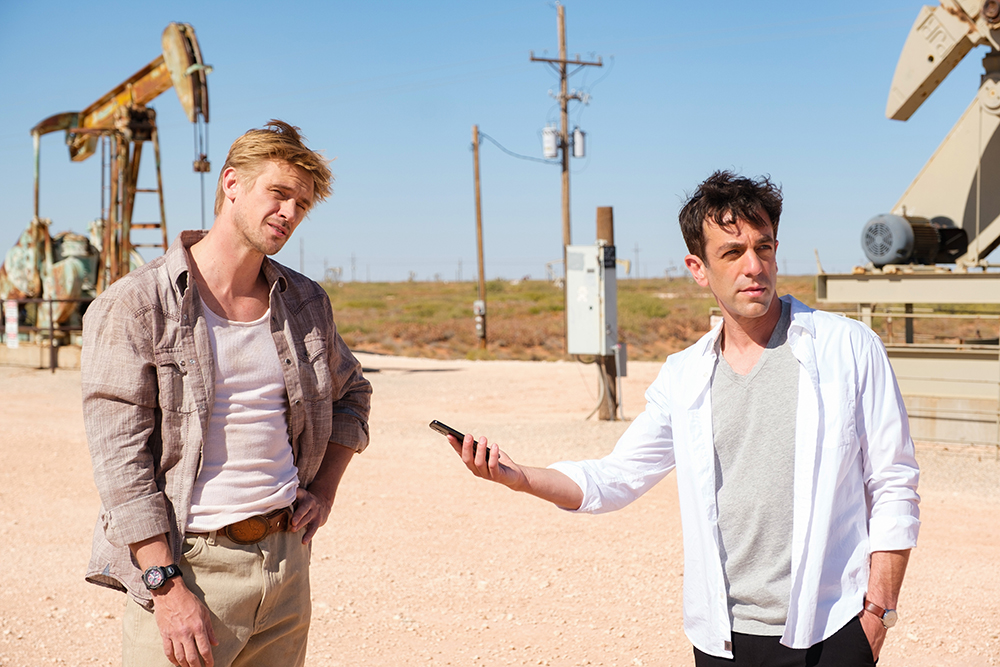 How do you evaluate a movie when its weaknesses are also its themes — a movie that seems to be about its own flaws?

“Vengeance,” a dark comedy (of sorts) from writer/director/star B.J. Novak, is about a overly pretentious urban writer trying to mine a podcast from a small-town murder. Its star is grating and unlikable — but only because he’s written that way. Its premise is alternately condescending and trite — because that’s how these stories are told. It doesn’t have a neat ending — because real-life tragedies turned into narratives rarely do.

So it succeeds, I suppose, at being unsatisfying.

Novak stars as Ben, a “New Yorker” staffer with dreams of virality. “I don’t just want to be a writer,” he unironically complains, “I want to be a voice.” When an old hook-up (Lio Tipton) dies under suspicious circumstances in West Texas, her family mistakes Ben for a loving boyfriend; unwilling to further disappoint the grieving family, he flies down to maintain the charade for the length of a funeral.

He discovers, however, the potential for serialized audio dynamite: A small-town murder story with ties to a half-dozen hot-button political subjects. He convinces a podcast bigwig (Issa Rae) to fund the endeavor and begins gathering rural flavor.

To dabble in the kind of semantic double-speak favored by Ben and his friends, “Vengeance” can’t decide if it’s about what it is or if it’s about what it’s about. Yes, the script is a commentary on our tendency to over-intellectualize and under-empathize when we look at the lives of others. It also does just that, however, it’s so busy trying to make points that it doesn’t bother to decide which ones are important.

It’s often funny, at least. Novak is better as a writer than he is as a director or performer; he’s competent at the latter two skills, but he is clearly doing too much at once with “Vengeance.” He might’ve stayed behind the camera; his take on Ben is too eager to look cool, too concerned with likability. More of an antihero was needed.

“Vengeance” is a promising effort for Novak — while he’s written and directed extensively for the small screen, this is his feature debut in both roles — that sells him as someone who could make a quite good comedy in the future. While those signs are present here, however, it’s ultimately a near miss.

I would listen to the podcast, though.

“Vengeance” is now playing in theaters.