Brendan Fraser is remarkable, but director Darren Aronofsky holds “The Whale” back from greatness. 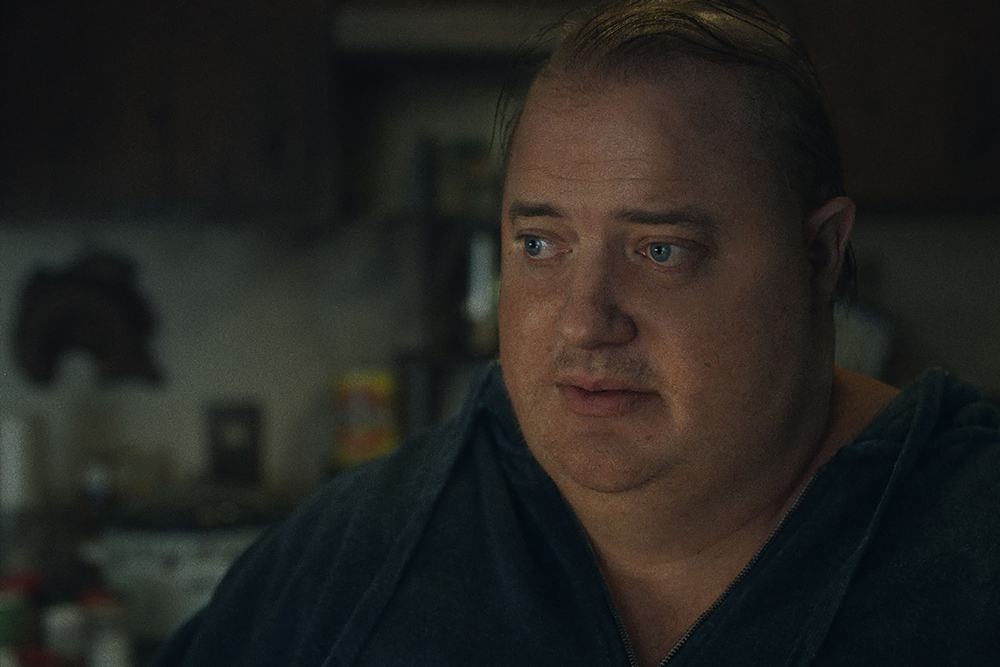 PHOTO COURTESY OF A24

If you’d like to see what happens when actors unwittingly battle with their director over a movie’s soul, watch “The Whale.”

I realize that might not be much of a pitch. It’s OK; I don’t really think you should watch the movie.

The most interesting thing about it by far, however, is the perspectives one observes from director Darren Aronofsky and the film’s cast, particularly star Brendan Fraser and supporting players Sadie Sink and Hong Chau. The performers endeavor to create a sensitive, emotionally resonant tale; the filmmaker thinks he’s barking outside a freak show.

“The Whale,” you see, is about a very large man. Fraser plays Charlie, a teacher who became a recluse and developed an eating problem after an emotional blow. (The film is named after Charlie’s love of “Moby Dick,” though the obvious entendre feels like little more than a bad joke.) He’s got a devoted friend (Chau) with a backstory to be revealed later, an estranged daughter (Sink) and online students who’ve never seen his face. (It’s pre-pandemic; he teaches at an online college.) He’s also got a few days to live, apparently, though he refuses for a variety of reasons to go to the hospital.

Charlie’s abiding characteristic, and the heart of “The Whale” — adapted by Samuel D. Hunter from his own play — is a deep love for the people he encounters, even as they might reject or hurt him. “People are amazing,” he says in the clip that will inevitably accompany Fraser’s Oscar nomination.

It gets to the heart of the story, that a downtrodden man with plenty of reason to become embittered can, even at the brink of oblivion, find beauty and wonder in the world. Even in a flawed movie, it’s a beautiful subject to explore.

And Aronofsky completely misses it.

The director, who has become something of a misanthrope in the middle portion of his career, structures “The Whale” very similarly to his two best films, “Black Swan” and “The Wrestler.” Together, they are a triad of bodies in extremis — the dancer pushing her muscles beyond their capabilities, the broken grappler unable to step away from the spotlight, the overeater gorging himself to death.

Aronofsky shoves “The Whale” into this ill-fitting box, because he can’t or won’t see the distinction; his camera gawks at Charlie’s size and circumstances. Moreover, though, Aronofsky does not seem to see his protagonist’s resilient warmth as instructive; the filmmaker seems to regard this as bizarre. Can you believe, he seems to ask, that this guy still can be positive about anything?

Yes, we can, Darren. Because humanity is not driven out by cellulite.

Despite such acts of cinematic sabotage, Aronofsky — who remains deft at pace, at least — cannot prevent “The Whale” from rising to a modicum of quality. While the script is interesting, the success of the film is mostly thanks to the cast, particularly Fraser, who finds depths of sympathy and soulfulness rarely seen. If you do see “The Whale,” you’ll marvel at his work.

A shame, then, that he didn’t have a director who could do the same.

“The Whale” is now playing in theaters.