Here’s the important thing: Our hero leaps from the roof of PNC Park into the river. You get to see it twice. 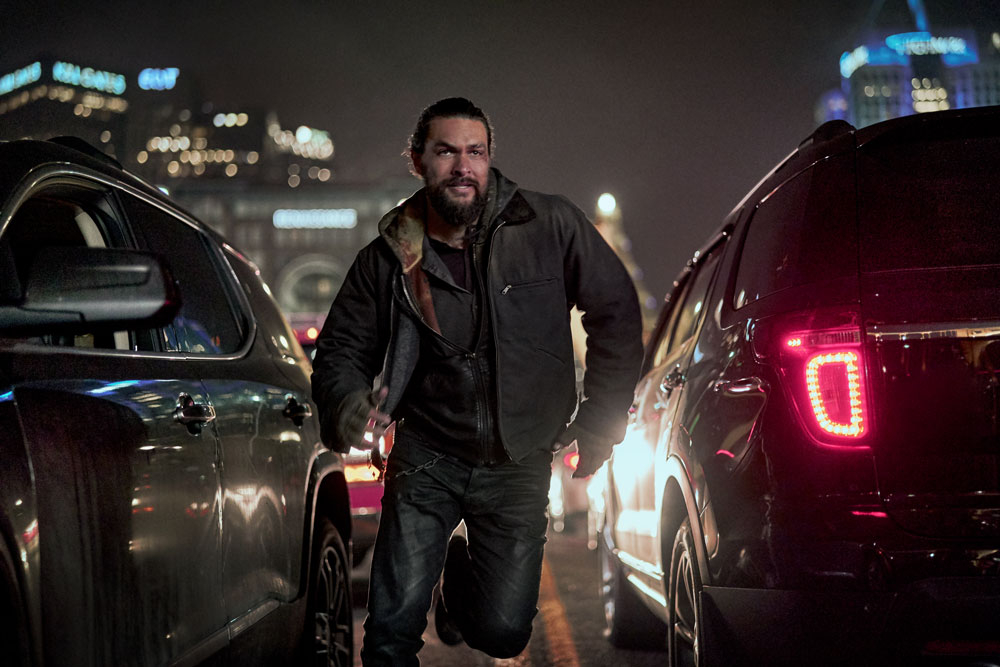 “Sweet Girl,” starring Jason Momoa as a man aggrieved and out for revenge, is the latest filmed-in-Pittsburgh to debut on Netflix. It’s also set here, as evidenced by ample shots of Downtown and surrounding environs and — in a break from many locally shot productions — an at least cursory understanding of the region’s geography and habits.

Okay, okay — they do act like the average Pittsburgher uses the subway on a regular basis, but plenty of films have made that mistake.

It’s a film with a fairly dire setup. Ray (Momoa) and Amanda (Adria Arjona) have an achingly loving marriage and a willful, headstrong teen daughter, Rachel (Isabela Merced). The movie allows them to enjoy their bliss for the length of the opening credits, before Amanda gets a cancer diagnosis. A new medication could save her, but there’s a snag: A big pharma company, under the leadership of fleece-wearing bro Simon (Justin Bartha), is interfering with the new drug to boost their own profits.

It’s no spoiler to report that Amanda dies — it wouldn’t be a gendered revenge quest if she didn’t, after all — and, in a moment of fury, Ray vows very public revenge on Simon. His search will lead far beyond one heartless CEO, but mostly consist of fighting, running and fighting some more.

So: Is there anything here, beyond the gotta-watch-that moment of ballpark bravado? Is “Sweet Girl” the kind of movie we’ll remember beyond its one big, local stunt — or is it destined to become another “Abduction,” the 2011 film remembered only as “that one where the kid from ‘Twilight’ slides down the glass thing above the PNC Park escalator?”

It’s at least better than that. “Sweet Girl” can’t pay off its narrative heft; for all its dramatics and ranting about corporate greed, it’s fundamentally a beat-em-up flick with little weight. In that, though, it’s decently successful. Momoa is a guy who looks very credible in a fight scene, and director Brian Andrew Mendoza wisely ensures that another brawl ensues about every 10 minutes. Merced, best known as the live-action Dora the Explorer, shows a bit of range and rage as well.

A key twist does not so much shock as simply occur, but it does propel “Sweet Girl” to the finish line. You’ll wait around to see if the right people come out on top, even if you’re not exactly invested in the outcome.

Okay: They got one thing wrong. This movie pretends that the crowd exiting a September Pirates game would be, you know, big. If Jason Momoa tried to hide in a late-season Bucco crowd, he’d avoid detection for about 15 seconds.