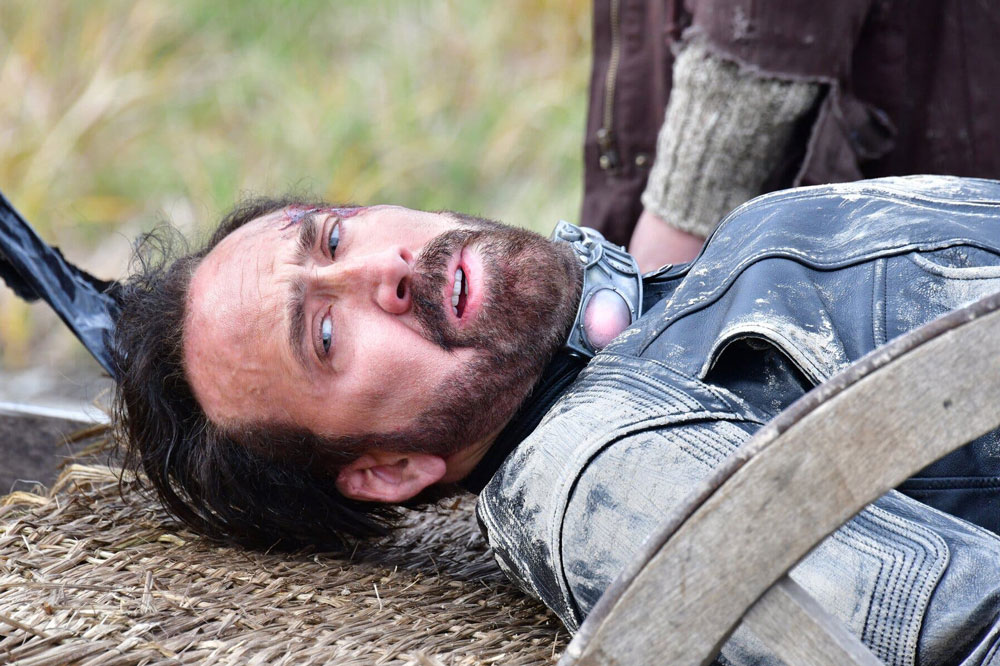 The poster for “Prisoners of the Ghostland” has a quote above the credits, as many movie posters do. These quotations are usually words of approval from reviews — never mine — or testimonials from fellow filmmakers. What’s unusual in this case, though, is that the quote comes from the star of the movie.

The quote reads: “The wildest movie I’ve ever made!” It’s attributed to Nicolas Cage, the protagonist and oddball center of gravity in “Prisoners of the Ghostland.” Undoubtedly, that’s quite a claim; the star of such bonkers endeavors as “Mandy,” “Color Out of Space” and “Pig” knows wild when he sees it. If he thinks this is a step beyond his own wacky oeuvre, that’s saying something.

It also sets up a level of expectation that “Prisoners of the Ghostland” can’t quite pull off. Make no mistake: It’s wild, yes, and bizarre. You will be utterly baffled by many sequences and plot developments, and you will likely leave without much clarity on what just transpired. There’s something very deliberate about this weirdness, as if the entire point of the project was to see how weird things could get.

After all, it’s right there on the poster. They weren’t going for good, gripping or groundbreaking. They were going for wild.

Cage plays … honestly, I don’t know how to describe him. I don’t know how to describe the film. Part of it is set in a hyper-stylized town that is part run-down resort, part old-west ghost town and part exaggerated Japanese game show. The other chunk of the film is set amongst a colony of doomsday cultist/irradiated post-nuclear survivalists, who keep turning passing travelers into living mannequins.

There is a narrative thrust, as Cage’s character is tasked with rescuing a wayward young woman — played by Sofia Boutella — and delivering her to a local bigwig. The how and the why of all of that, though, is bizarre, and only occasionally narratively sound.

This is effective (or at least intriguing) in the front half of the film, when everyone is acting like they’re in a live-action “Scooby Doo” cartoon, when they’re not rhythmically singing or chanting. In the film’s opening scenes, the focus remains on bizarre choices; Cage’s character rejects a sturdy car for his quest, instead riding off on a rickety bicycle. “He’s so cool,” a nearby henchman mutters in admiration.

Later on, “Prisoners of the Ghostland” seems to lose focus and forget to keep making the bizarre choices that propel its first half. It’s still plenty strange, of course, but rather than truly give in to the dream-logic phantasmagoria it wants to be, it inches closer to its pseudo-western themes, shifting to a direct (if muddled) rebellion against the powers that be.

If it could’ve kept its freak-show appeal throughout, “Prisoners of the Ghostland” might’ve been unforgettable; as such, it’s merely wacky. In a cinema landscape with far too much bland, though, wacky is its own merit.

“Prisoners of the Ghostland” is now available via digital on-demand services.