The title is as straightforward as the plot in this throwback action romp. 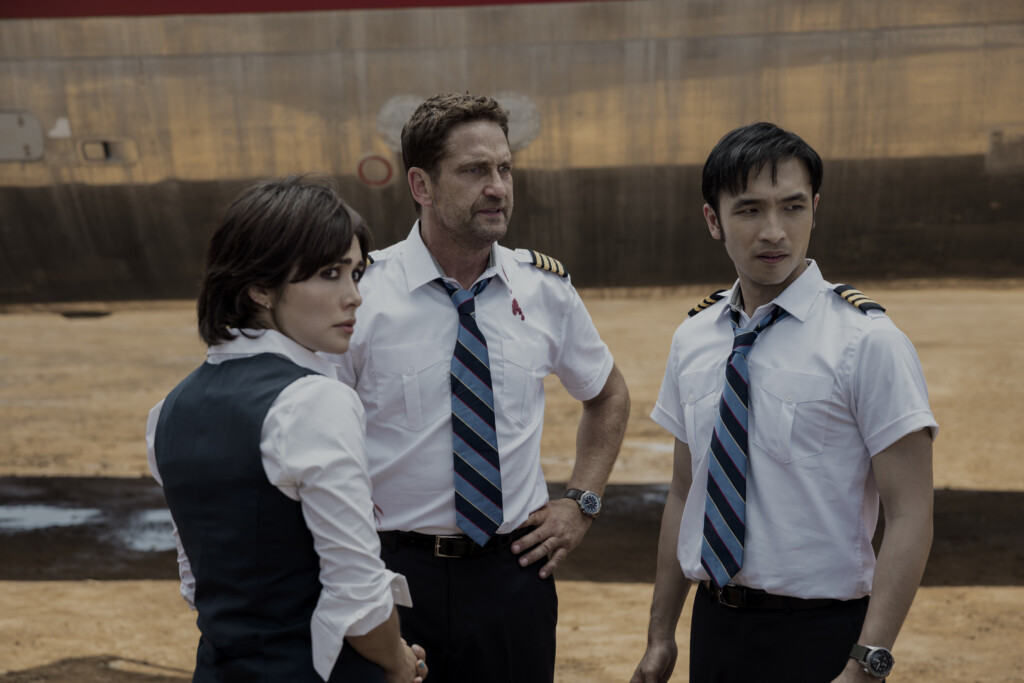 I guess all the dynamic flight-in-peril names had been taken? Jodie Foster had “Flightplan,” Liam Neeson had “Non-Stop.” Samuel L. Jackson had to deal with those snakes.

That left the simple name “Plane” for Gerard Butler, though the brevity of that name does telegraph the experience of watching this delightfully unpretentious B-movie. You are getting a simply structured, straightforward action romp — the kind of R-rated, meaningless entertainment that once populated drive-ins and extra multiplex screens but has become a relative rarity, at least in theatrical distribution.

Butler plays a grizzled yet affable commercial airline pilot departing on a New Year’s Eve jaunt from Singapore to Tokyo. The flight is nearly empty — a reminder that we are firmly in the realm of fiction — but does contain a purportedly dangerous fugitive (Mike Colter) in the middle of a globe-spanning extradition.

Somewhere in the South Pacific, lightning strikes the titular plane, necessitating a crash landing in a remote jungle. Unfortunately, it turns out to be one of those bad-guy islands — you’ve heard of them — populated by a separatist militia so feared that local authorities won’t launch a rescue effort. Guess it’s up to our hero — and a convenient team of mercenaries deployed by a corporate fixer (Tony Goldwyn) — to get the passengers to safety.

Many aspects of this plot, obviously, are patently ridiculous — but that’s a feature, not a bug. This is a species of absurd yet exciting action flicks that have all but vanished into the bargain bin. “Plane” has no coherent politics (and woe unto you if you try to interpret a message), little internal logic and foregos twists in favor of an escalating series of complications. And, while similar entertainments have tended toward PG-13 tameness (ready for endless cable-TV airings), “Plane” is gleefully violent, a bloody exception to an increasingly tentative cinema landscape.

Whether the violence — or the somewhat callous disregard for geopolitical nuance — is to your taste will vary from viewer to viewer. But if you have the will and ability to turn off the vast majority of your brain and see how a haggard guy saves the day, “Plane” will satisfy.

“Plane” is now playing in theaters.