It's a dirty world in Guillermo del Toro's latest period piece, but that world is vividly and intriguingly realized. 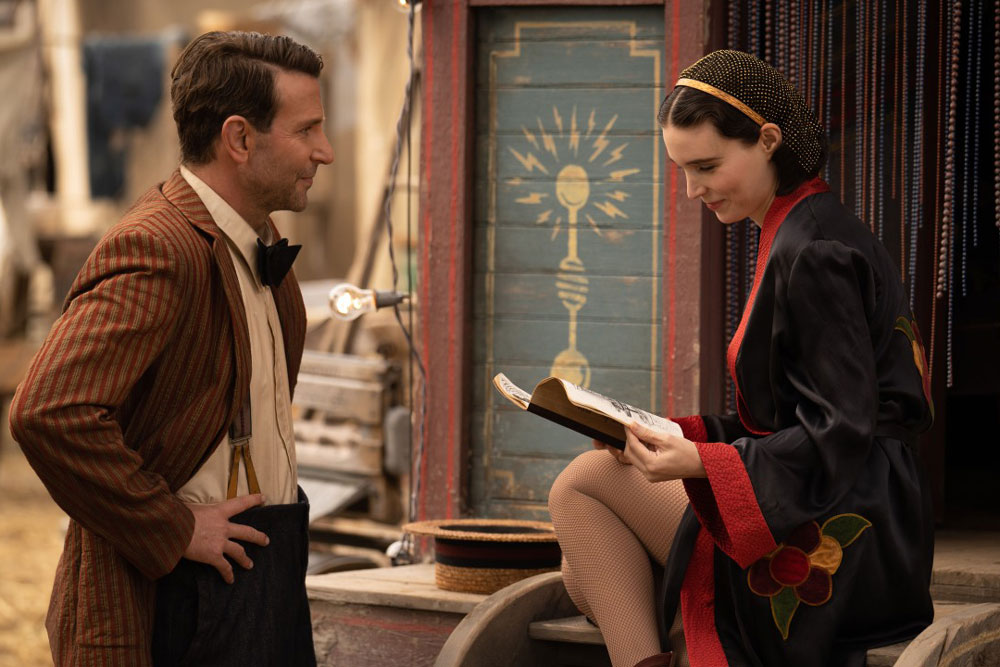 This movie is very cold.

Snow swirls outside frosted windows. Hard-luck people curl under piles of hay and try to sleep. The colors are muted; the score is sparse. Rare moments of warmth and affection from the characters — those not fully committed to miserdom — are ultimately callous and self-serving.

Perhaps that’s fitting for a movie that seems to suggest mankind’s natural state is the exploitation of others.

It’s beautifully and carefully crafted; we expect nothing less from Guillermo del Toro, the director known for painstaking and vivid works of magic realism such as “The Shape of Water” and “Pan’s Labyrinth.” This time, though, there’s nothing explicitly otherworldly afoot; the wonder in “Nightmare Alley” is farce, the product of carny tricks and canny performance.

We have no heroes here, but our protagonist is Stan Carlisle (Bradley Cooper), a glowering drifter days removed from committing an act of arson at his childhood home. He joins the motley crew of a second-rate traveling carnival, using his looks and charm to work his way up a very short ladder.

Carlisle has some token misgivings at the brutal aspects of this itinerant life; he’s none too pleased at the plight of the carnival’s geek, nor the apathy that head honcho Clem Hoately (Willem Dafoe) shows toward his charges. He finds intrigue, though, in the art of cold reading and the old-school mentalism act peddled by pseudo-mystic Zeena (Toni Colette) and her partner-in-con, aging psychic Pete (David Strathairn). He also sees sideshow performer Molly Cahill (Rooney Mara) as a fitting match — or maybe just a ticket out.

Carlisle will ascend beyond the trappings of the midway, waltzing obliviously into a bit of high-society intrigue involving a curmudgeonly millionaire (Richard Jenkins). “Nightmare Alley” moves languidly, attempting to tease something operatic out of the story; it’s an adaptation of a 1946 crime novel of the same name, previously adapted into a 1947 film noir.

That version ran 111 minutes; del Toro finds cause to add a further 39 minutes of action. The somewhat taxing length is a mixed bag; the script, co-written by the director and Kim Morgan, does a fine job of world-building but tends to lose its focus, fascinated with its period details.

If it’s slow, though, it’s captivating. Even when del Toro isn’t at his best, he’s a master of filmcraft, and “Nightmare Alley” is a feast of design. It lingers in the mind not as a gripping story but as an ominous and foreboding world, like a sinister locale visited for vague reasons and ominously recalled.

Awfully cold, though. There’s no character here to root for, no message to reassure. It’s a handsome experience but an intimidating one.