It's certainly light and occasionally silly, but Lesley Manville carries this airy comedy. 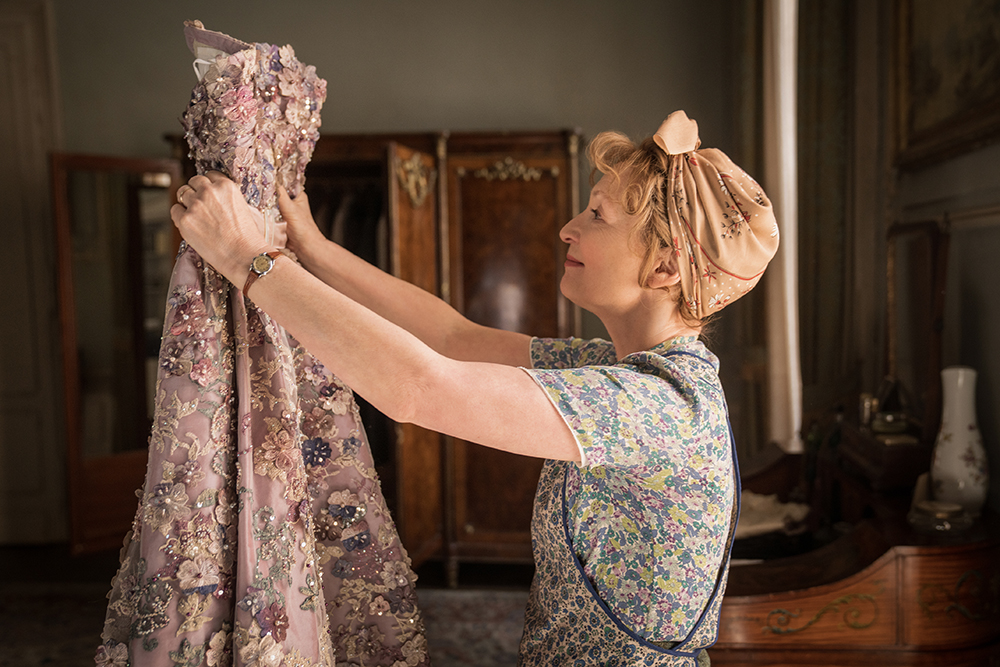 Pleasant cinema — the rare type of film that aims neither to challenge nor to surprise, but merely to be generally nice to watch — must walk a perilous line.

This mostly barren genre, to which the mild comedy “Mrs. Harris Goes to Paris” assuredly belongs, seeks to affirm; the goal here is to make the audience feel better about themselves. Such efforts exist on a precipice, though; try just a bit too hard to please and you’ll totter over a cliff into a sea of preposterousness.

“Mrs. Harris,” a third adaptation of the novel by Paul Gallico, tap dances on that precipice; in every moment, it threatens to become too cute, too cloying, too neat. Fortunately, it has a truly delightful lead in Lesley Manville, a remarkably gifted actress who charms the viewer — even as she desperately works to hold the narrative together.

The title character is a hard-luck yet happy-go-lucky cleaning woman in 1950s London; her husband went off to war more than a decade prior and hasn’t been heard of since. Harris’s faith in his survival is threadbare when word finally arrives; his effects have been found among the recently discovered wreckage of a plane lost in 1944.

Somehow, the confirmation of her husband’s passing puts a dream in Mrs. Harris’s head; she wants to own a Dior gown, having seen a stunning example in one of the homes she cleans. Convenient windfalls and old-fashioned scrimping net her enough money to afford the dress. She jets off to Paris, where her unrefined charm and refreshing earnestness generally delight the jaded Parisians (with the exception of a fashion bigwig played beautifully by Isabelle Huppert, inserted into the story as a very polite foil).

The journey Harris takes through the City of Lights rivals the travels of Forrest Gump; she inadvertently finds herself mingling with high society, accompanying a lonely Marquis to the Moulin Rouge and chatting with a supermodel at a movie premiere. There are probably a bit too many scenes of Harris dispensing no-nonsense, working-class wisdom to stuffed shirts; the last hour of the film contains many of the same notes played repeatedly at the same volume.

There’s a bit too much of everything, in fact. A breezy, swift comedy was called for; instead, director Anthony Fabian lingers on faces, vistas and gowns so frequently that the film nearly hits the two-hour mark. “Mrs. Harris” contains too much of a good thing and quite a bit of some mediocre things.

Fortunately, Manville — a recent Oscar nominee for “Phantom Thread” — is there to maintain the film’s humor, drive and dignity. Without her, it would’ve surely dived off of the cliff into ridiculousness; she keeps it on the edge, if barely.

“Mrs. Harris Goes to Paris” is now playing in theaters.