The latest, and theoretically last, chapter in the dinosaur saga forgets what made the original great. 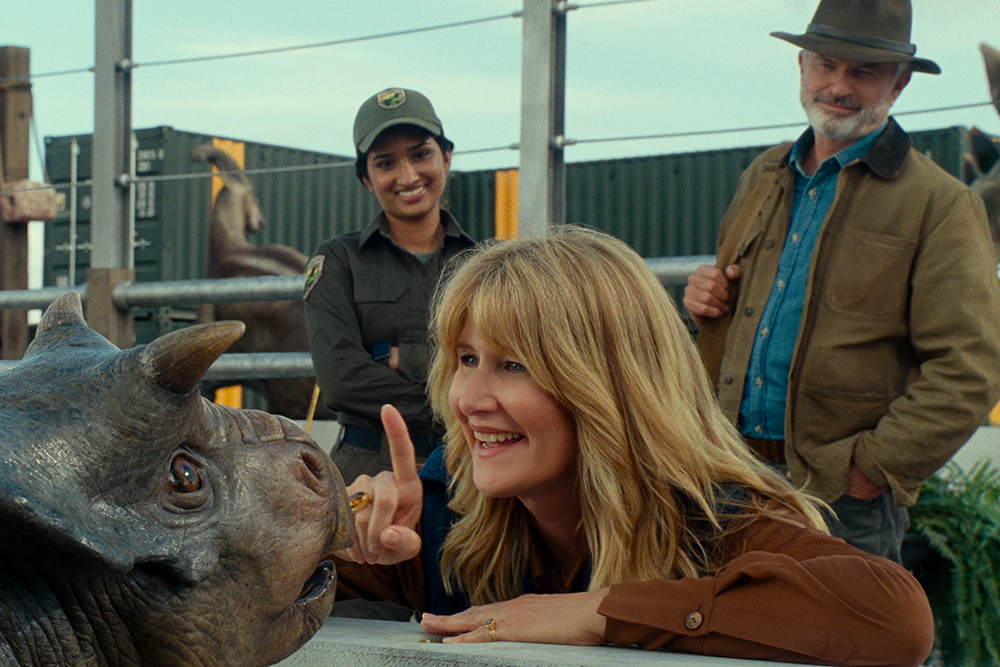 Unfortunately, I have to report that “Jurassic World: Dominion” belongs in the sad canon of latter-day sequels that forgot why their franchises were good in the first place.

It’s simple. It’s both variable and repeatable. It works.

Did I mention the locusts? Because I’m here to see dinosaurs, not bugs that are a bit larger than they ought to be.

Unlike some misguided sequels, “Dominion” does eventually stumble back to the formula. After that opening hour, which feels more like a forgettable Bond installment than a “Jurassic Park” movie, heroes both old (Laura Dern, Sam Neill, Jeff Goldblum) and new (Chris Pratt, Bryce Dallas Howard) wind up at a secretive tech campus somewhere in Italy. (Somewhere in Italy where a frozen lake sits approximately one mile from a lush rainforest, but let’s not quibble.) A minor character from the first movie (Campbell Scott) is doing stock mad-scientist stuff under a tech-bro veneer; there are new dinosaurs, there are old dinosaurs, there are even more locusts.

Once things go haywire, it starts to feel like a “Jurassic Park” movie again, if not a great one. The last hour is much more satisfying than everything that preceded it, and the reunion of the original stars provides some juice; Goldblum, unsurprisingly, is a delight. Even if some of the new dinos look more like “Star Wars” creations than recognizable thunder lizards, it’s easy to get swept up when tiny humans run away from big, imposing beasts.

There’s nothing new here, however, as “Dominion” is too concerned with making endless visual and situational references to every previous film — from Dern brushing her hair in exactly the same way she did in “Jurassic Park” all the way to restaging the firestorm of “Jurassic World: Fallen Kingdom” — to add anything. It’s all a reference; it’s always an echo.

Actually, I had one new experience this time around: Checking my watch during a “Jurassic Park” film. I had never done that before.

Perhaps all those nods are because “Dominion” is being billed as the conclusion of this series. I’m not sure who they think they’re fooling with that lie; it’s 2022, no intellectual property ever ends. Perhaps a full reboot is in the plans or a spinoff away from these characters. Anything that refreshes the series (and gets it away from the promising-then-disappointing “World” arc) would be welcome, I suppose.

But “Dominion,” while not the worst movie in the series, is a sour note to conclude on; misguided, mistimed and mishandled, it would make a sad ending to this saga. It may not be the last “Jurassic Park” film, but it might be the last one I looked forward to.