Jennifer Lawrence, Leonardo DiCaprio and Meryl Streep face the end of the world in a comedy that leaves a mark. 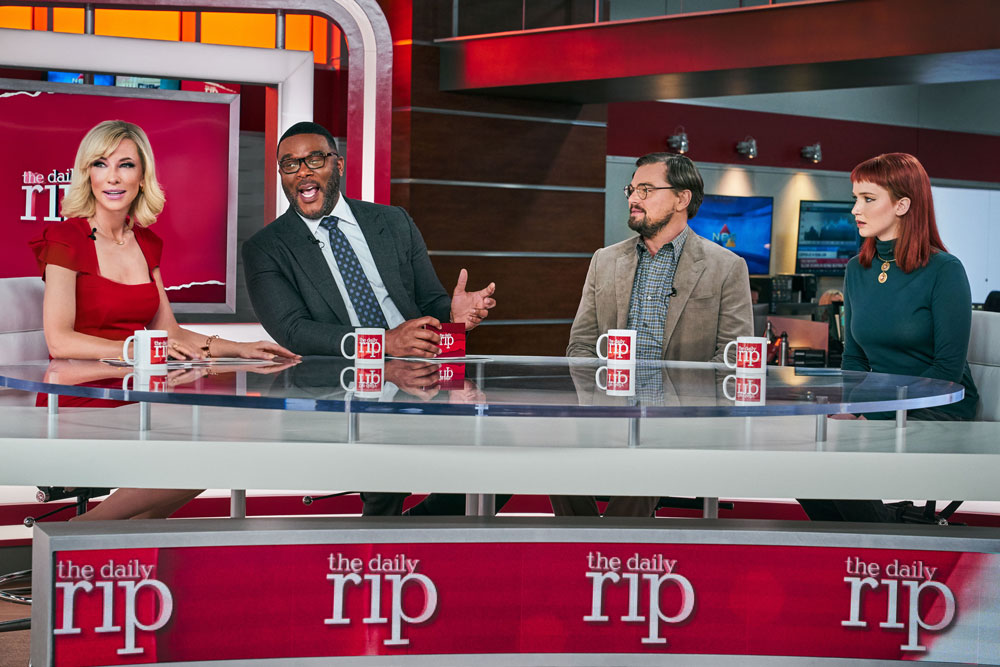 Writer/director Adam McKay’s transition into social satire, first in “The Big Short” and continuing with the curious biopic “Vice,” began with a minimum amount of wackiness. The longtime director of broad comedies such as “Anchorman” and “Step Brothers” likely wanted to establish that, while his new direction might still be funny, it would not necessarily be uproarious — trading hearty guffaws for dry, knowing chuckles.

In “Don’t Look Up,” an apocalypse comedy by way of a scathing geopolitical indictment, more of the humor is back. There are long, deft setups for well-delivered jokes; there are even moments of pure silliness that wouldn’t have been out of place in “Talladega Nights.” It’s easily the funniest movie in McKay’s new mode.

I left the theater thoroughly depressed, though. It’s an odd combination — though I think it may have been the goal.

McKay says that “Don’t Look Up” is a metaphor for climate change, though it stands in well for COVID or any other global threat. A pair of scientists — panicked but likable Dr. Randall Mindy (Leonardo DiCaprio) and fatalistic doctoral candidate Kate Dibiasky (Jennifer Lawrence) — discover a sizable comet is headed for a collision with Earth in a matter of months. They successfully alert the relevant NASA scientist (Rob Morgan) but then run into a problem: No one much cares.

The president (Meryl Streep) is a disinterested media product, further driven away from meaningful action by her doofus son — who happens to be her chief of staff (Jonah Hill). An attempt to alert the public via an appearance on a network morning show, hosted by a pair of chuckling jokers (Cate Blanchett and Tyler Perry), goes awry — but turns Dr. Mindy into an unlikely celebrity.

The pair does eventually manage to convince the world that there’s danger afoot, but that doesn’t make the path any less rocky. “Don’t Look Up” eventually becomes a fairly direct (and, admittedly, often preachy) analogue for the past two years — those presidential rallies will look awfully familiar — as McKay demonstrates that, when faced with collective challenges, humanity is much quicker to turn on one another than unite.

That doesn’t mean that “Don’t Look Up” is a grim harbinger of our own doom. Not while you’re watching it, anyway. The cast — also including standout turns from Ron Perlman, Timothee Chalamet, Ariana Grande and a show-stealing Mark Rylance — is hilarious, led by Lawrence in her funniest and most confident turn yet. While the satire is pointed, it’s never dry; “Don’t Look Up” is funny again and again, spotlighting the humor in every scenario.

But after the credits rolled — a mid-credits scene is an essential payoff, and a post-credits scene is an okay stinger — I spent a few days feeling distraught. Perhaps that’s the result of too much proselytizing in the script, or maybe it was McKay’s intention: laugh now, cry later. Whether you find that balance interesting or irritating will likely determine how you feel about “Don’t Look Up.” I found plenty to like, but if you told me this movie left you cold and angry, I don’t know that I could argue.

“Don’t Look Up” is playing in select theaters now. It will stream on Netflix beginning Dec. 24.