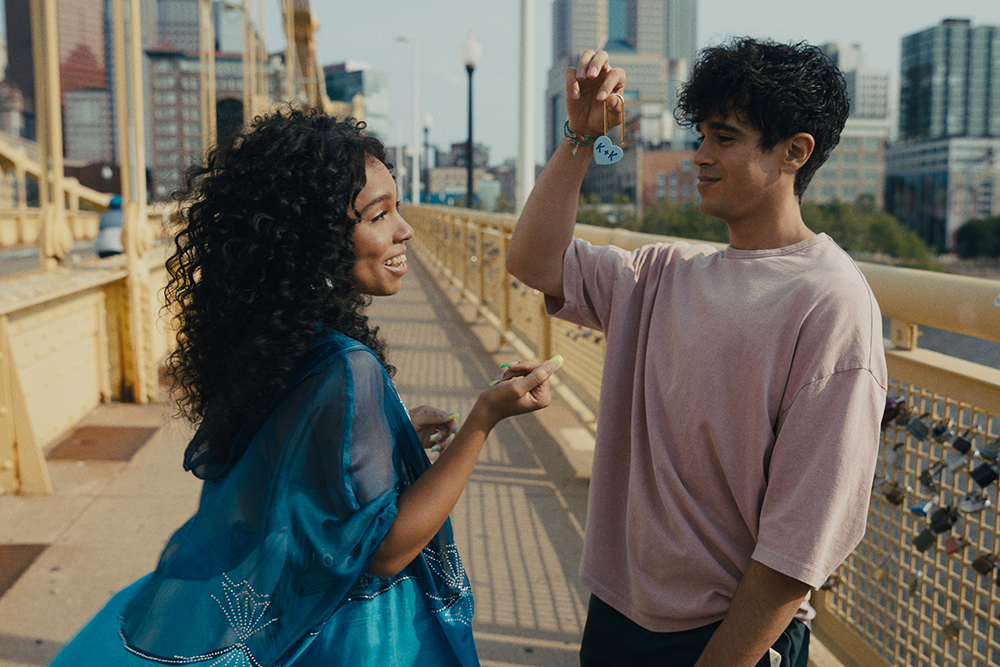 The multi-hyphenate star, an undoubtable fashion icon, obviously has a knack for style and color. So it makes utter sense that his directorial debut, the romcom “Anything’s Possible,” would have an immaculate visual style. The color is vivid, with a different palette for each character — not merely in their attire, but in the light and production elements that surround them. His rhythm and visual language, too, is lively and fresh.

In contrast — and wisely — he plays the plot relatively down the middle. It is an old tale, vividly told.

A teen romance through and through, “Anything’s Possible” follows the senior year of Kelsa (Eva Reign), a fashionable young Pittsburgher with dreams of becoming a wildlife videographer. Across the easels in an art class, she begins to fall for Khal (Abubakr Ali), an awkward-yet-charming guy who doesn’t quite know where he’s headed after graduation.

The first half-hour of “Anything’s Possible” gets the pair together; the second complicates matters. A friend of Khal’s is resistant to his buddy dating Kelsa, who is trans; a friend of Kelsa’s had her own feelings for Khal and becomes something of a jilted villain. Fundamentally, this is every other romcom, delivered in an enjoyable, fresh package.

Of local interest: Part of that packaging is a jumbo-sized serving of Pittsburgh. Khal and Kelsa take a first date to Phipps Conservatory (which subtly transforms into the National Aviary midway through the evening, but we’ll let that slide) and wander Downtown in between classes, which were filmed at Pittsburgh CAPA. In one civics class, students are quizzed on the administrations of various city mayors; this is, in my memory, the only film that discusses the accomplishments of Sophie Masloff.

Porter has crafted a vision of the Pittsburgh he loves. More importantly, he’s made a good, enjoyable film; while “Anything’s Possible” is a bit thin in the back half, it’s too winning to ever become tedious. Credit is also due to Reign, who brings charisma and a natural movie magnetism in what should be a breakout role.

And yes, Porter’s voice is all over the infectiously catchy soundtrack. What’s not to love?