Another ancient document was discovered during the transition from Heinz Field to Acrisure Stadium. 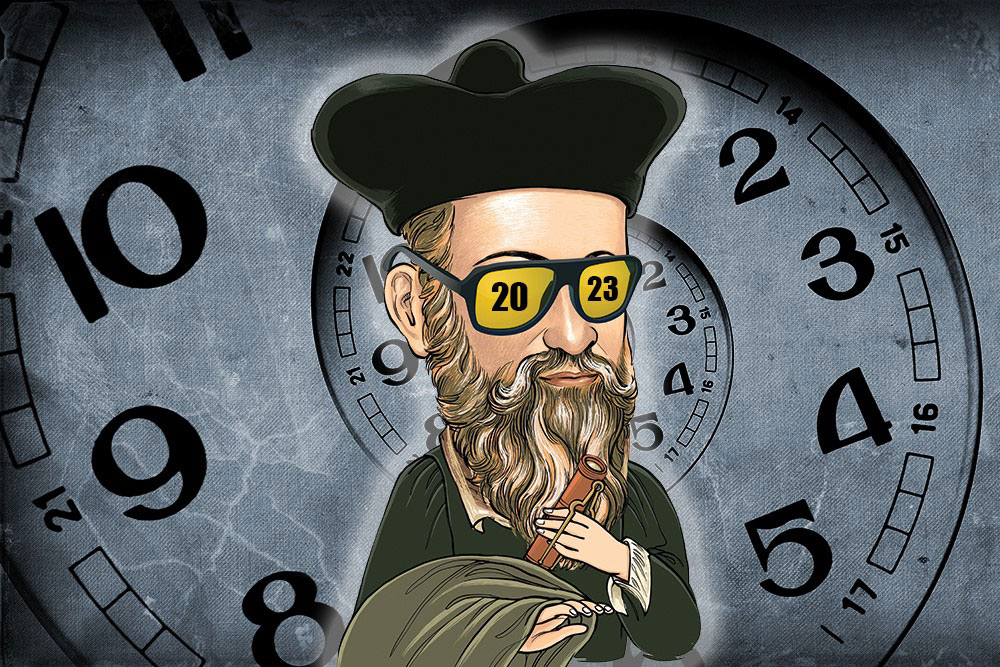 Two years ago, an archeological discovery beneath a sadly bygone purveyor of late-night meals revealed valuable predictions for Pittsburgh’s future. We attempted, with some success, to interpret the prophecies of Yinztradamus.

Now, an update! As the gone-yet-not-forgotten ketchup bottle that once towered over Heinz Field was lowered to the ground, another weathered scroll was shaken loose. How it got there, we don’t know. What relation it has to decorative tomato products, we don’t know. But we know who created it: Yinztradamus.

(I mean, we don’t know that. It’s just that there’s only one fictional, geographically anachronistic soothsayer around here.)

Here are Yinztradamus’ prophecies for 2023, and our attempts to interpret them.

“The weary path will clear its obstacles, yet none will rejoice.”
Gee, thanks for the clarity on the first one, Yinztradamus. What is this, a discount fortune cookie? Still, we have a pretty good guess.

After a 50-year project wrapped in 2014, the much-maligned Route 28 remained relatively clear of construction for about half a decade. Then another, equally contentious project began, aimed at further reducing congestion.

“From the near west, a beloved figure will approach. The people will embrace the newcomer at the expense of a false friend.”
Easy. We are mere months away from the arrival of fast-food chain Raising Cane’s, the growing fried-chicken business popular in the south and midwest. Have you had Raising Cane’s? It’s excellent. It’s, like, the Five Guys of fast-food chicken. And you know what happens when you have Raising Cane’s? You immediately realize that Chick-Fil-A is not actually any good. By mid-summer, you’re going to drive past three different Chick-Fil-A locations to get to Raising Cane’s.

“The cost of the people’s dwellings will not exceed reason; a soothing in the waters of money will provide relief. Because yinz know, ain’t no one paying more than $2,000 for a one-bedroom, I don’t care if it is on Butler, seriously.”
Uhh, we think Yinztradamus was … mildly possessed, maybe? Either a future voice took over the seer’s missive at the end there, or — and let us not even consider this possibility — Yinztradamus is not actually an ancient visionary, but rather some modern, mischievous jagoff with an English degree. Let’s just ignore this mystery and move on.

Regardless, the meaning here is clear: We’ve hit peak rent, at least for the time being. While Pittsburgh is not immune to the runaway inflation that has raised home prices and rents across the country, logic has to prevail. Pittsburgh has always been an affordable place to live, and at some point, people are going to start noticing that we have 90 neighborhoods, and only like 12 of them are pretending you need to pay through the teeth for a few measly scraps of floor space. The days of renting a house in the city for about $650 a month are gone, but hopefully, prices are going to come back down to earth.

“Glory will be conferred unto the fruit of the region, but the gold one will not approach the confluence.”
Hollywood on the Mon is once again pumping out movies; just last week, the locally shot “A Man Called Otto” arrived in theaters and fellow regional product “The Pale Blue Eye” made its Netflix debut. More Steel City cinema is coming, including a big one: “Rustin,” a drama starring Colman Domingo as the ’60s Civil Rights icon.

The film, which is set to premiere on Netflix at some point this year, is expected to be an Oscar competitor in 2024. We think Yinztradamus is saying that the film will indeed win a major Academy Award — but calls for the trophy itself to be paraded around town, Stanley Cup style, will not be heeded.

“When the great artist of the time approaches the confluence, vessels of many sizes will gather. Collisions will follow; the waters will be blockaded with detritus. For seven days, no passage will be made.”
As you may have heard, there are many more people eager to see Taylor Swift than there are tickets to see Taylor Swift, even with two shows scheduled at Acrisure Stadium. (Or, depending on who you talk to, demand is the same as it has always been but Ticketmaster is a cabal that conspires to drive up secondary market prices through the illusion of high demand. Anyway.)

We can see it now: Everyone who didn’t get a ticket and knows somebody with a boat is gonna crowd the river around the stadium to try to hear a bit of the show. Everybody’s gonna be drinking, half of them won’t know how their boats work, yachts start colliding — before we know it, Taylor has caused the unwitting construction of a river-spanning dam made of broken boats and beer kegs. This is gonna be rough. How about we all just get blankets and hang out on the lawn? Yes, the lawn with the geese.

“The young hero, rife with confidence, will lead the warriors to triumph. One dozen battles will be claimed; few will be lost.”
The Steelers are going 12-5 next year.