Merry Christmas, Ya Filthy Animals: Have You Seen The New ‘Home Alone’ Mural?

Artist Jeremy M. Raymer had the concept in mind since last year. 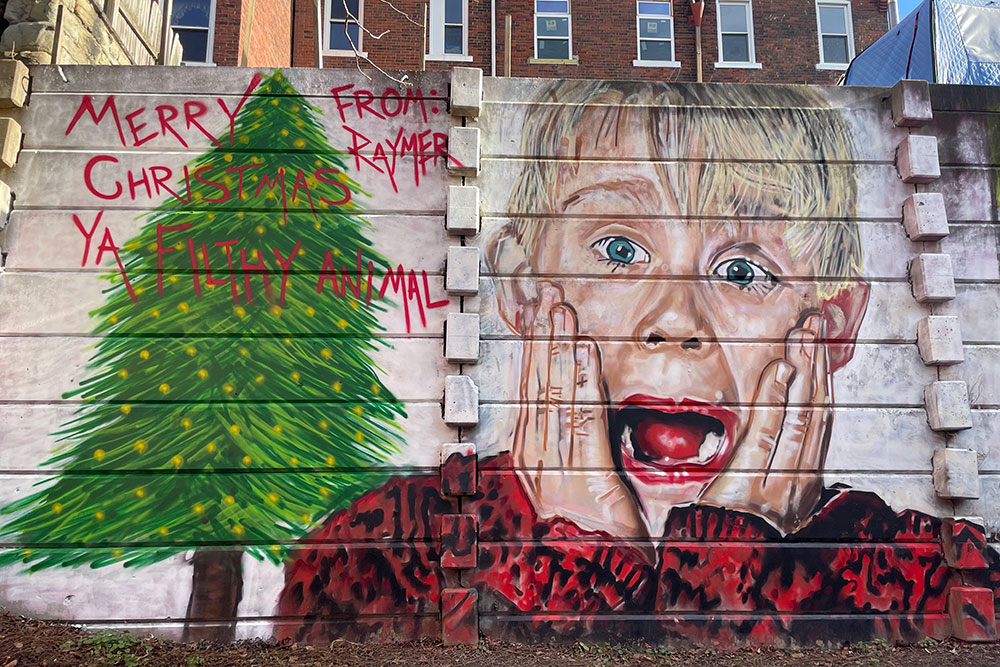 If you’ve taken a stroll through Lawrenceville this week, you may have noticed a familiar face — Kevin McCallister of “Home Alone” fame adorns the back wall of the Parklet on Butler, which is maintained by Sanctuary Pittsburgh. The new mural features the Kevin character in his signature pose, with his hands on his cheeks, and the text “Merry Christmas Ya Filthy Animal” scrawled atop a Christmas tree.

Jeremy M. Raymer is the artist behind the project — and behind most of the other art in the parklet, too. He’s friends with the owner of the courtyard, and he has been painting murals in the space since 2014. The “Home Alone” artwork marks his 10th or 11th piece displayed there, and so far, it’s his most popular.

When photographer Dave DiCello shared a picture of the mural on his Instagram account, the post received more than 11,000 likes, and Raymer says he’s been getting comments and direct messages from people visiting and praising the piece since he finished it last Wednesday.

“It’s always a great feeling when you create something that resonates with people here, and they can get out and enjoy it and make memories from it,” he says.

The idea came to him last year, and it underwent a few changes — including what exactly the text component would say — before he was finally able to paint it last week. 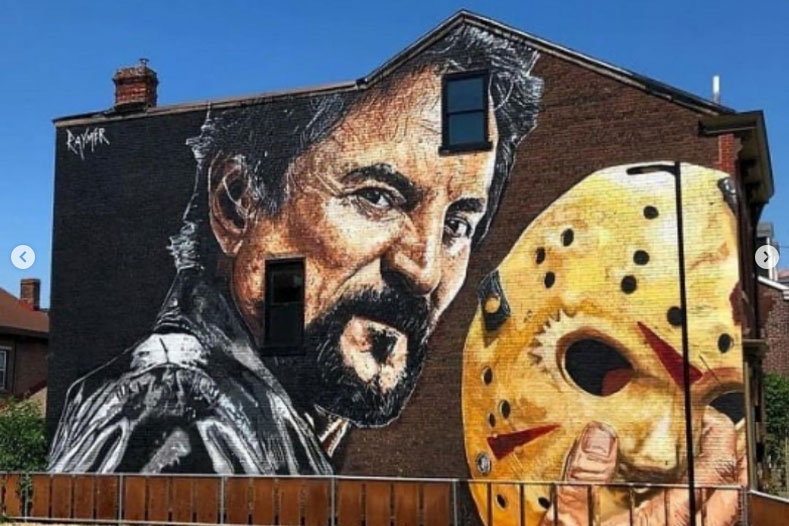 “It just so happens we were getting some really nice weather, which definitely makes it a little more conducive to go out and spray. When it gets below 45ish, 40, it’s not as easy. The spray paint doesn’t come out as it typically does,” Raymer says.

He adds that someone tagged over the previous mural that was there, and he figured it was time for an update anyway.

“It just kind of fell into place with the timing and the weather and the concept, so I just had a few days to go out and paint it,” he says.

Raymer is a fan of the “Home Alone” films, but mostly chose them as his muse for the mural because he figured it would be fun as the city geared up for Christmas.

“I’d gone out and visited the ‘Christmas Story’ house [in Cleveland’s Tremont neighborhood] and saw a 40-foot-tall pink rabbit inflatable sculpture there, it was kind of funny. Maybe next year it’ll be something from that,” he says. “I’m definitely a big ‘Bad Santa’ fan, maybe something like that. Definitely something that resonates with peeps and is kind of fun, you know?”

The Pittsburgh native has quite a few murals around the city, from Uptown, South Side and Lawrenceville to the North Shore, Deutschtown and Chateau. Fans of his work can find it using the virtual “art map” he created, which can be downloaded from one of his two Instagram accounts. (Here’s his main one.) 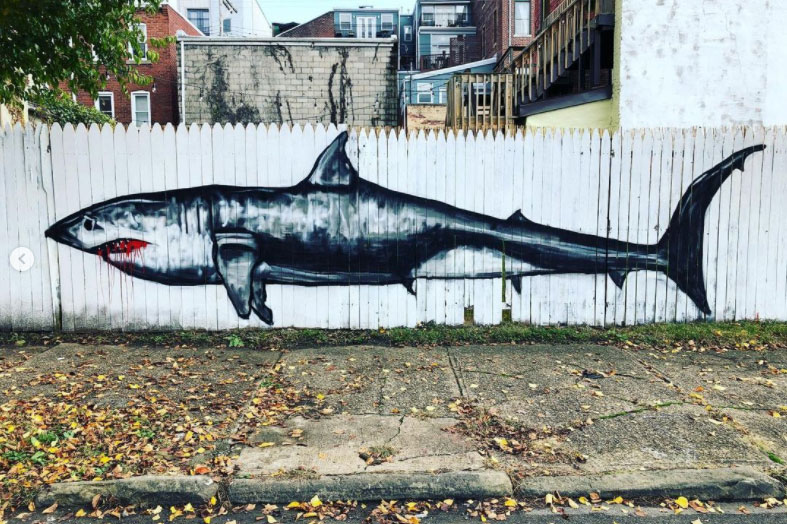 But art wasn’t always his career.

Raymer studied biomedical engineering at the University of Pittsburgh, and though he took art classes there in his free time, he never planned on making it a full-time gig. After graduation, he worked for years as a biomedical engineer, experimenting with the mechanical properties of heart valves — a profession that would later influence his artwork by instilling in him a solid work ethic and a devotion to meticulous detail.

He received a job offer and moved to San Francisco in the mid-aughts, and that’s where he began painting seriously. In the summer of 2013, a trip to Wynwood Walls — an outdoor museum in Miami featuring murals and street art by creators from around the world — inspired him to take up mural painting. A year later, he moved back to Pittsburgh, and would soon start to pursue art full time.

“In May 2016, I resigned from my last engineering job. I was a senior test engineer at Westinghouse,” he says. “I’ve been full-time self-employed as an artist for about 5½ years now.”

Raymer would like to take on “monster walls” someday — something larger than 10,000 square feet, a scale he’s never done before. But in the meantime, he’s painting things like the 350-400- square-foot “Home Alone” mural, with about 30 cans of Montana Gold, Montana Black and MTN 94 and his noise-canceling Beats headphones playing some dubstep — a genre he says is “less sophomore-ish” than the metal he used to listen to while working.

So far, he’s put an estimated 32,000 hours into his work, developing a characteristic style. 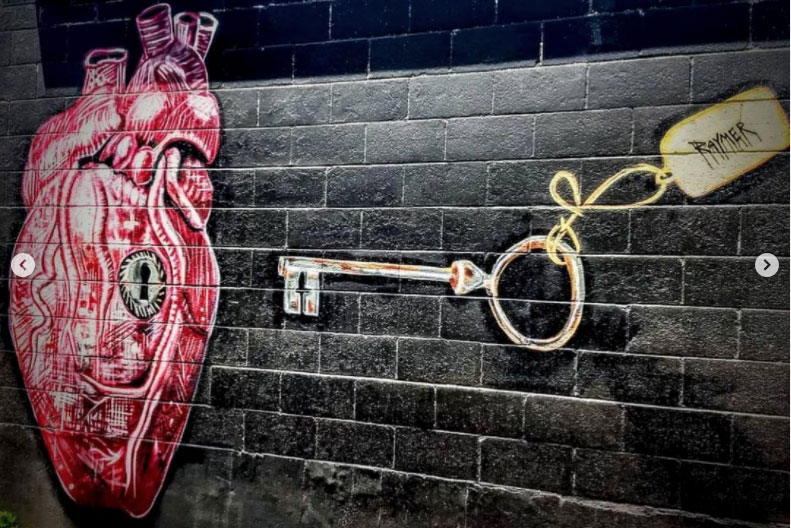 “I like to do accurate portraits, but allow a little bit of a mix,” he says. “Kind of analog and digital components, where it looks near-photorealistic in areas but also like you can see some of the artifact of creation, too.”

He points out that some of those “artifacts of creation” can be seen on Kevin’s hands in the “Home Alone” mural, where there are overlapping lines that serve as remnants from when he repositioned his projection.

“It almost gives a dynamic, energetic sense to the piece,” he says.

If you see Raymer out and about while checking out the mural, he encourages you to stop by and say hello.

“It’s always nice to see peeps. I’m always happy and willing to stop. A lot of times people see me with headphones on and they’re hesitant to say hello, but come say ‘what’s up,’” he says. “A lot of the reason I get to do what I do is because of you.”