Meet The Professionals Keeping Sex Safe On The Set

Intimacy coordinators are the latest additions to stage and screen, including the filmed-in-Pittsburgh series “American Rust” and “A League of Their Own.” 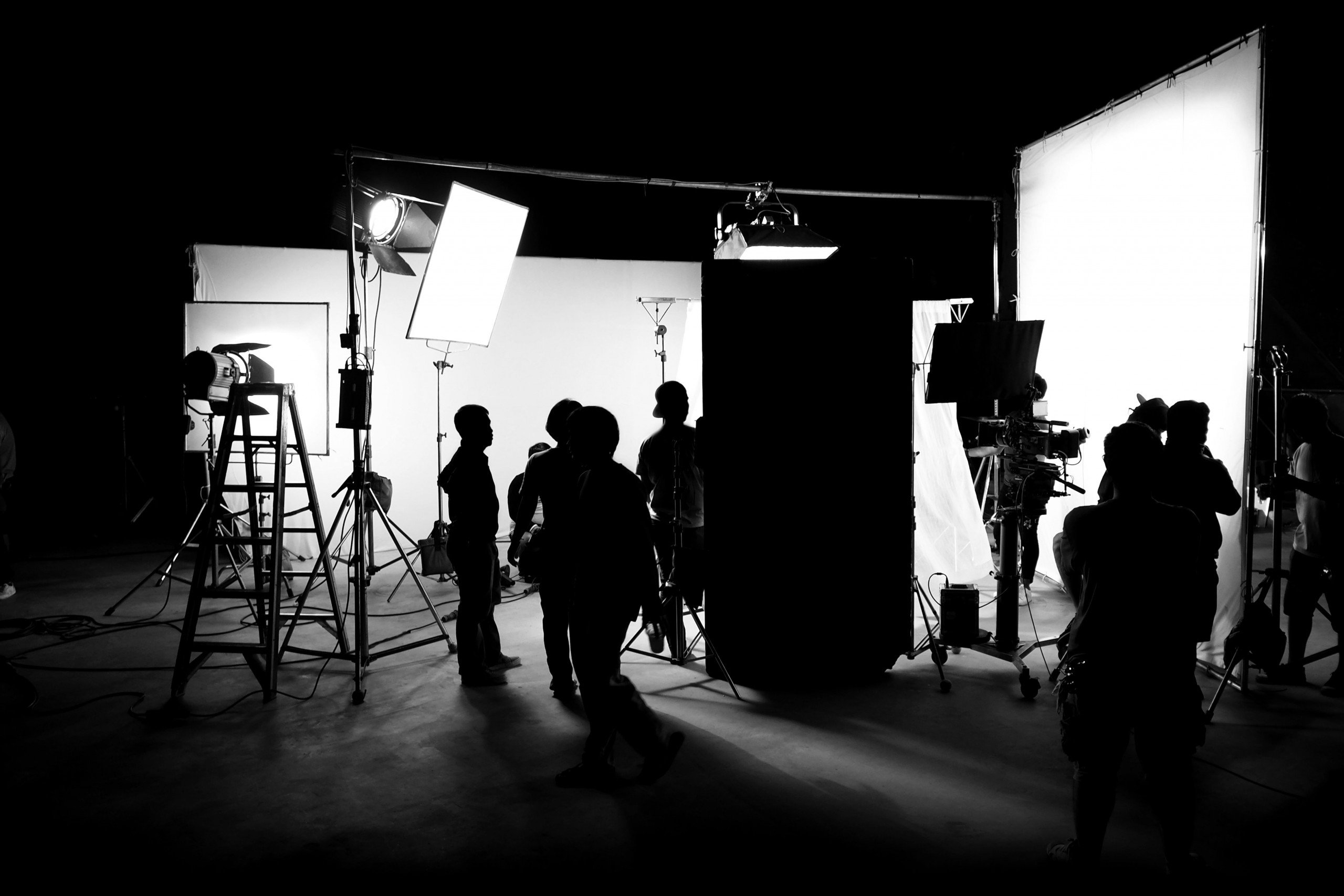 Hollywood has fallen hard for Pittsburgh’s many charms, so close encounters with Oscar winners like Viola Davis, Tom Hanks or Christian Bale are a possibility on any given day. And with each new project comes a growing list of job opportunities, including several involving safety and boundaries — and one that might make you blush.

That would be the intimacy coordinator, a tangible side effect of the #MeToo movement and a role that has been in demand on professional stage and screen productions since 2018. The goal is to establish physical and psychological boundaries and maintain a safe and communicative environment, from pre-production to finish. 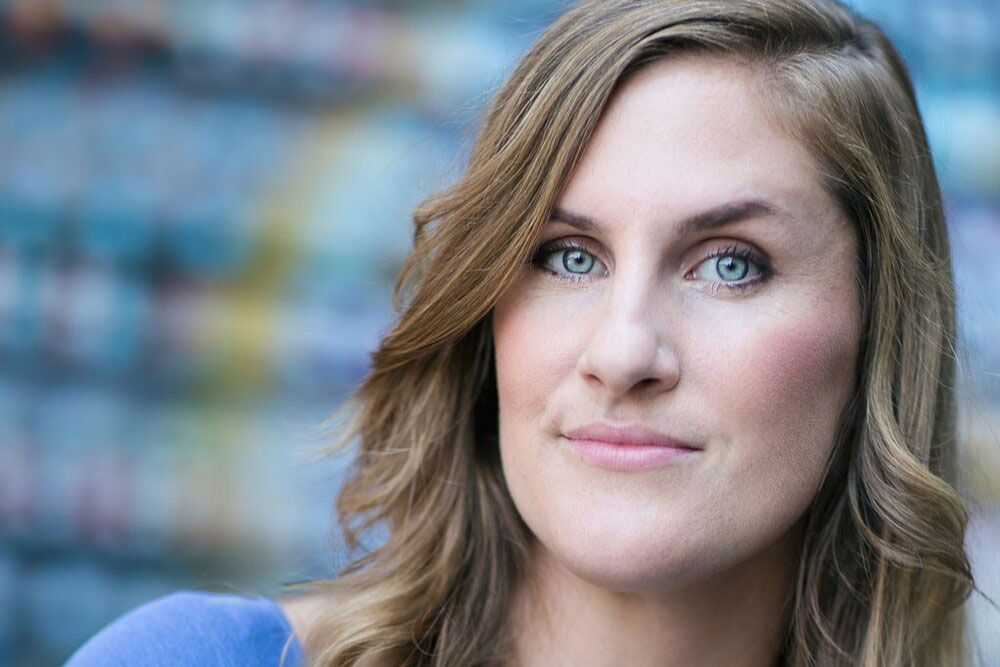 HAVING THAT DIALOGUE AND A PLAN SETS UP A SAFETY NET. THEN, IF IT STILL DOESN’T FEEL RIGHT, JUST SAY SO AND WE WILL ADJUST. – SAMANTHA MCDONALD | PHOTO BY JOSH STRINGER

Samantha J. McDonald, the intimacy coordinator for the recently filmed-in-Pittsburgh “American Rust,” can help an actor feel safe and protected — even while working on a TV drama that offers a steady procession of sex and violence.

Broaching the subject of more explicit scenes is delicate, but McDonald is skilled in easing into such topics. She’s the first to mention “the hotel-room scene with the businessman” in the seventh episode of “American Rust.” If you watched the series, you know; if you didn’t, let’s just say it was explicit and involved two male actors.

“American Rust” doesn’t lack for provocative content, but for this scene in particular, McDonald says she was “in awe of the beautiful storytelling.”

Talking by phone from her home in Atlanta, McDonald says she understands that her assessment might sound strange, considering the content. “But, for something that could go into the shock side of things, I don’t think it was shocking — because the story was so sweet, so genuine.”

McDonald has a trained eye; she began training for her current position — coming from a background as a fight instructor and stunt woman on shows such as AMC’s “The Walking Dead” — before the title of intimacy coordinator even existed, working with two originators of the field.

The Differences Between Stage and Screen 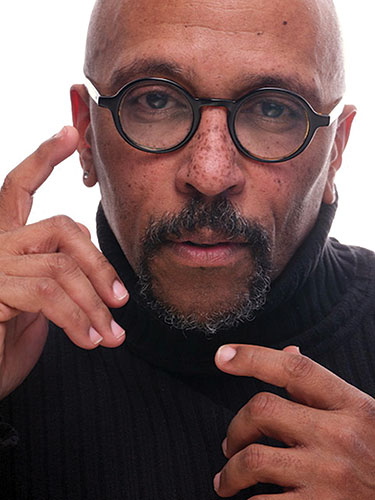 THERE’S AN EFFORT TO RECRUIT MORE MEN, IN PARTICULAR MEN OF COLOR, BECAUSE OF SO MANY SHOWS COMING OUT. – TOMÉ COUSIN | PHOTO COURTESY TOMÉ COUSIN

Pittsburgh’s Tomé Cousin also was an early adapter, adding intimacy coordinator to his bustling international career as a director, choreographer and educator. The one-time Broadway dancer, who has worked on some of the top local film projects of 2021 — “Rustin,” “The Pale Blue Eye” and Billy Porter’s “What If?” — trained for his latest role with Theatrical Intimacy Educators (TIE) and also is certified through the Intimacy Coordinators of Color.

He also has worked closely with TIE co-founder Chelsea Pace of Baltimore, who was intimacy coordinator for the Pittsburgh-filmed Amazon Prime series “A League of Their Own,” which wrapped last year.

Although the tag “intimacy coordinator” is new to most people, the need has been a topic for a long time in the theater world, he says.

Cousin discussed it years ago with Debbie Allen, who played Anita in the 1980 Broadway revival of “West Side Story.” “She was explaining to me the trauma everyone who plays Anita has to go through coming out of the character, because the last time you see her [onstage] is the attempted rape scene. And that actor goes home with that every night.”

He notes some of the differences between theater, where weeks of rehearsal take place before actors ever perform for an audience, and a screen project, where there may be a quick run-through before actors must perform a scene over and over until the director is satisfied.

He illustrates the distinction by explaining his involvement in a scene of physical abuse in “The Pale Blue Eye,” an upcoming Netflix movie starring Christian Bale and Gillian Anderson that filmed mostly at Westminster College in Lawrence County. For that scene, with one female and three male actors, shot outdoors on a cold and muddy day, Cousin worked closely with stunt coordinator Adam Hart and others on physical boundaries and choreography. Watching the process, however, “it was the repetition of it where trauma can come in,” Cousin says.

Cousin felt he had to speak up for the actor and used the TIE-recommended safe word, “button.”

“Not because there was abuse going on, but they were doing the scene over and over, and they needed a break. And the director was very thankful and open to that.”

“There’s an effort to recruit more men, in particular men of color, because of so many shows coming out,” Cousin says, noting “Thoughts of a Colored Man” on Broadway and a show he is working on, “Choir Boy,” for Philadelphia Theatre Company. “It’s a very specific thing when you get into race and culture, even how one touches another’s hair.” 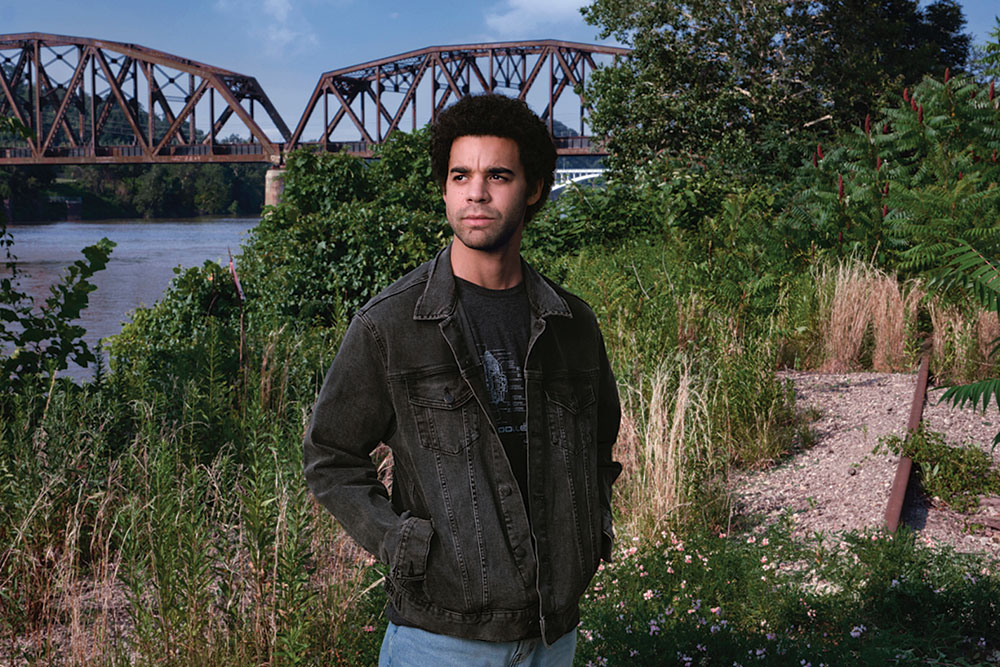 McDonald credits Tonia Sina with laying the foundation for intimacy choreographers and coordinators. Like McDonald, Sina trained as a fight instructor before she began researching on-stage intimacy and sexual harassment in the industry for her MFA thesis in 2006 at Virginia Commonwealth University. With Alicia Rodis, Sina co-founded the organization Intimacy Directors International, the forerunner of today’s Intimacy Directors and Coordinators (IDC). Its mission is to teach “best practices for performed intimacy, simulated sex and nudity for theater, live performance, TV and film. We aspire to create safe and harm-free environments for the production of intimate scenes.”

When Rodis was hired in 2018 to work on HBO’s “The Deuce,” it was the first time a series employed an expert in the field, according to a BuzzFeed article that also discussed the “frenzied” sex scenes on “Game of Thrones.” HBO later announced that all of its shows would use an intimacy coordinator, and the Screen Actors Guild followed with guidelines requiring a coordinator for the filming of sex scenes.

With Rodis’ encouragement, McDonald found a new calling. She is now a certified intimacy coordinator with IDC, a transition made easier by rethinking what she had learned through her expertise in staged violence.

“I understand camera angles. I understand masking. A lot of it was transitionable for me when it comes to things like simulated sex scenes,” she says.

Just as in fight scenes, making sure a performer is prepared is not as easy as reading a script. Some scenes are written in great detail and others might say, “Now they have sex.” Manifesting what is on the page also varies by the director’s vision and actors in the scene.

Whether they are veterans or relative newcomers, like David Alvarez playing Isaac English on the aforementioned “American Rust,” helping actors figure out their boundaries can change moment to moment. Performers with clout have been known to put limitations in writing before the cameras roll. For example, Sarah Jessica Parker had a no-nudity clause in her contract during the run of HBO’s “Sex and the City.”

McDonald’s work begins with a thorough conversation about boundaries. “Having that dialogue and a plan sets up a safety net. Then, if it still doesn’t feel right, just say so and we will adjust,” McDonald says.

In the case of that hotel-room scene in “American Rust,” communication was the key to what you saw on screen.

“I will say that with David, he’s a newer actor, though not brand new, so we just had a lot of conversations,” McDonald says. “We talked about things in depth, he asked a lot of questions, I gave him as much detail as I could. Some actors, they don’t want to know everything, but with this … yeah, we went into detail.” (Alvarez can also be seen as Bernardo in Steven Spielberg’s “West Side Story.”) 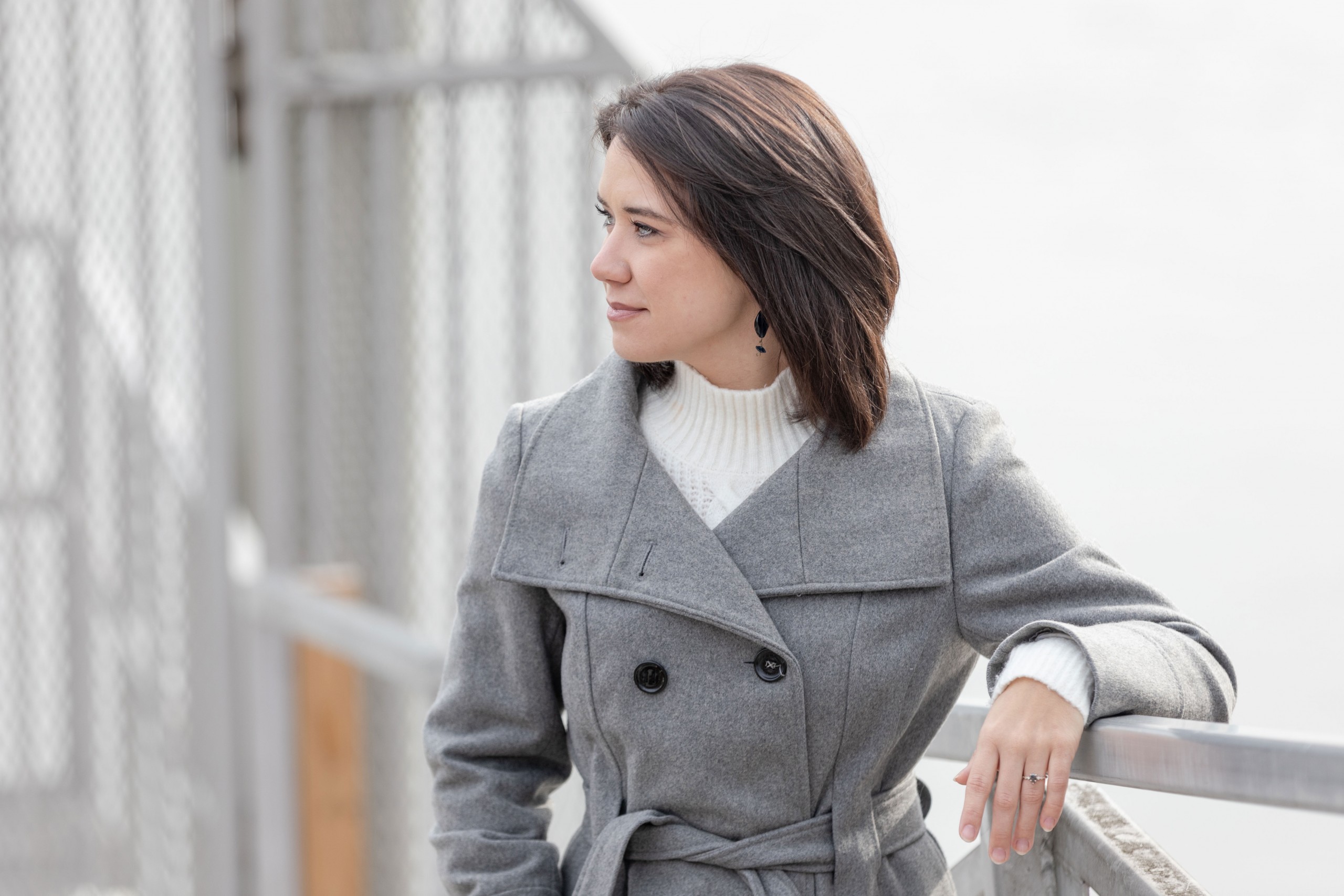 LYDIA GIBSON, AN EDUCATOR AND PERFORMER, HAS RECEIVED TRAINING THROUGH THE THEATRICAL INTIMACY EDUCATION WORKSHOP AT CARNEGIE MELLON UNIVERSITY. SHE BELIEVES IN “BOUNDARIES FOR BOUNDLESS CREATIVITY.” | PHOTO BY RENEE ROSENSTEEL

Among other Pittsburghers in this field, Lydia Gibson, like Cousin, was introduced to the role of the intimacy coordinator at a Theatrical Intimacy Education workshop at Carnegie Mellon University. The performer and educator quickly discovered the real-world applications of her TIE training as the performing arts teacher for The Ellis School in Shadyside. Now, Gibson says, she’s “helping younger generations to learn their boundaries and articulate them and take that out into the world much sooner than most of us ever learned.”

Gibson, a mezzo-soprano who studied voice performance at Saint Vincent College, could be seen during the pandemic in Quantum Theatre’s virtual production of Mike Bartlett’s “Wild.” She was playing opposite her fiance, Chris Cattell, as the flirtatious Woman, while he portrayed a whistleblower in the vein of Edward Snowden. Their scenes were shot in a claustrophobic room, from the perspective of Big Brother, watching via hidden camera.

Gibson felt very safe, she says, because of all the precautions taken by Quantum, and noted that discomfort can be an essential part of the acting process, “but being unsafe, that is very different.

“I do want to clarify that intimacy choreographers and coordinators are there to help facilitate a safe space for the utmost creative process,” she says. “However, they are not therapists.” Their job, she says, is to “give people tools to help dig into things in a safe way.”

A TIE catchphrase Gibson likes to use is “boundaries for boundless creativity.” “One thing I have seen in my own work or in other people’s productions is how much more interesting or even intimate it can be with boundaries in place,” she says.

In the past year, Gibson has worked on filmed productions of Shakespeare’s “A Midsummer Night’s Dream” for the Heritage Players, a community theater in Brookline, and “Lysistrata” for Pittsburgh Festival Opera,” the latter set for release in 2022. “Lysistrata” is an ancient Greek comedy about a “sex strike” — women withholding sex from their husbands in hopes that, in the men’s desperation, they will end the Peloponnesian War.

She was in the midst of directing a production of “The Wolves” with Ellis high-schoolers when she attended her first TIE workshop. The 2016 play is about conversations among teenage girls as they warm up for soccer practice. “There’s pretty intense conflict, especially for minors, and so we worked on the process of boundaries and of how to step away from a role in a healthy way after you’re done with rehearsal or the show.”

Working with amateur and professional companies as well as teens has given Gibson a wide range to explore in her evolving role. She also draws from her own experiences, recalling moments when “my gut was telling me something was wrong, but I didn’t know how to articulate it, and there’s the myth that we need to be easy to work with. You want to be asked back.”

Now the first generation of intimacy coordinators is passing along the tools to shatter such myths.

When you see “intimacy coordinator” in the film credits, you should think of it this way, says Cousin: “Someone in a production or a film company was thinking about precautions and safety and care.”

Sharon Eberson, the former arts & entertainment editor and writer for the Pittsburgh Post-Gazette, is a critic and arts journalist for the website OnStage Pittsburgh.

This article appears in the March 2022 issue of Pittsburgh Magazine.
Categories: Arts & Entertainment, From the Magazine, Hot Reads