The owners of the Strip District restaurant incubator have selected its new lineup of restaurants. 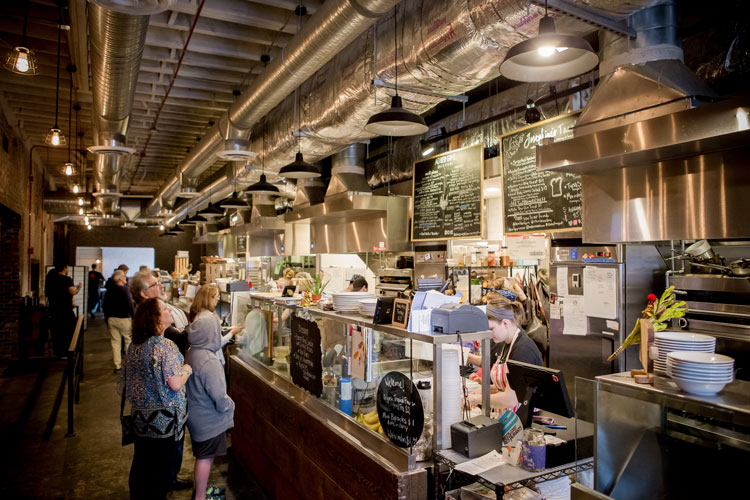 Smallman Galley in the Strip District has a new class of chefs. The first-in-the-nation restaurant incubator’s second group of operators begin service in June (the current iteration of restaurants will run through May 28). Owners Tyler Benson and Benjamin Mantica — with some advice from the current Smallman Galley chef/owners and a select group of restaurant industry experts — narrowed down the field of applicants to four concepts.

“Looking back on the previous year, we figured out with the operators that there are certain things that work well in a fast-casual atmosphere. Certain dishes work, and others don’t. I think these concepts are more tailored from the start for the fast-casual environment,” says Benson.

“They have personalities they can all get behind. Each of their stories is pretty compelling,” says Mantica.
​
Smallman Galley 2.0 restaurants will operate in the space for 12 months, a six month shorter residency than the initial class of eateries.

“When we started, we didn’t know what Pittsburgh was going to accept. We’ve been surprised at the openness of our customer base with the latitude that they allowed us. Based on the success of the first class, we believe the customers will allow a certain degree of experimentation with the new group,” says Benson. 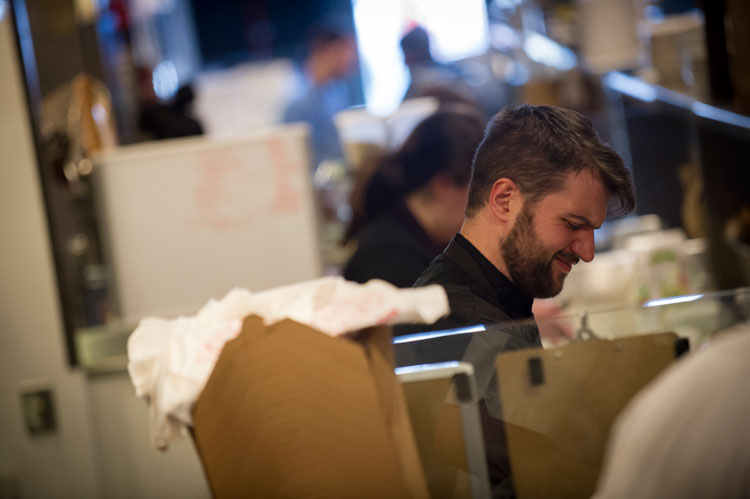 Jesse Barlass, Colonia
Jesse Barlass already knows his way around Smallman Galley. He’s worked there for the past year as sous chef of Carota Cafe. “I have a nice feel about how the menu should be laid out, and I know what questions the customers coming in now are asking. I’m going to cater my menu to the crowd I’ve seen walk through Smallman,” he says.
​
Barlass already had solid credentials before he moved to Pittsburgh in 2015. He worked for two years as a sous chef at The Wallace in Los Angeles, and, prior to that, as sous chef at Sable Kitchen & Bar in Chicago.

Now, he looks to bring a menu of Latin American cuisine to Pittsburgh. “It’s my favorite type of food to cook. It’s my favorite type of food to eat,” he says.
​
Barlass says his first restaurant job at a Mexican restaurant in Strasburg Va., but that his connection to Latin American cuisine runs even deeper. “My parents also met in a Mexican restaurant in Hawaii,” he says. “My dad was a cook, and my mom was a dishwasher.” 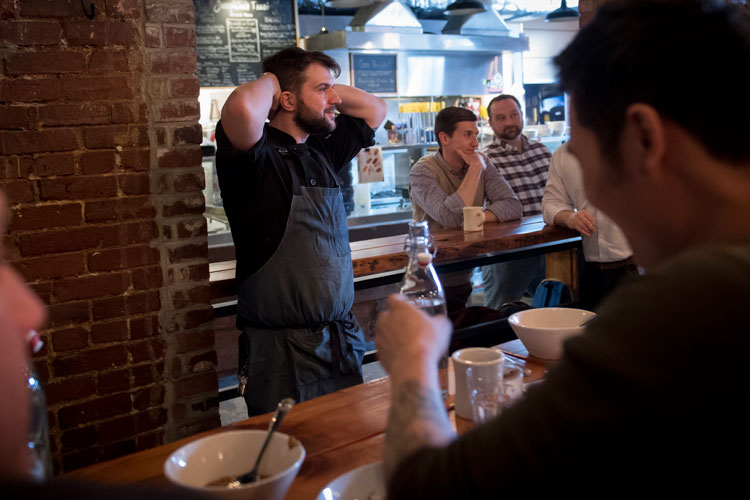 Barlass plans on embracing the flexibility of the Smallman Galley model to deepen his exploration of the cuisine. “I don’t like being stagnant. I’m going to go through, country by country, and put things on the menu. I want to learn all I can about this cuisine, and I want to teach people, too.”

As for an opening menu, diners can expect an array of lunchtime sandwiches built on house-baked, regionally specific bread. Barlass will include larger plates and moles on his dinner menu. He says he’s been testing recipes and will use the next few months to continue to build the menu.

“I”m coming in with three sample menus to try to figure out what works and what doesn’t work,” he says. 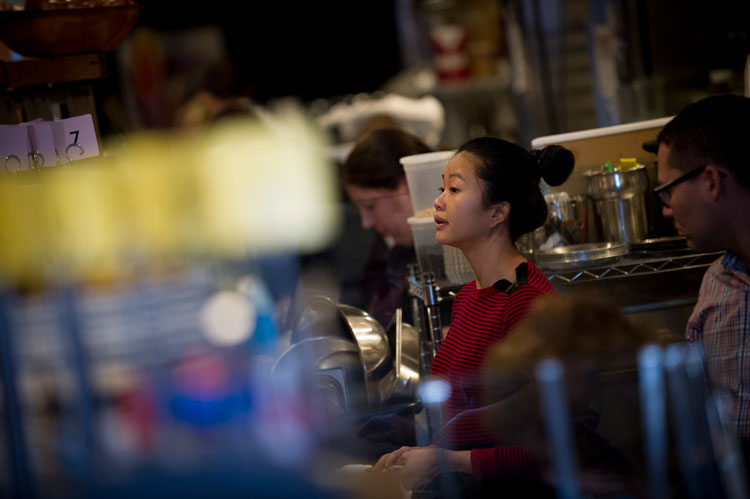 Hoa Le, Banhmilicious
Hoa Le is the first chef with no significant restaurant experience to helm a space at Smallman Galley.

“This is a great opportunity for me to explore doing something that I always wanted to do, which is opening a restaurant,” she says.

Le has a background in biology and chemistry and worked as a food microbiologist. Her most recent job was as associate quality assurance manager for Smucker’s, where she audited flavor, color and chemical suppliers to make sure they met company specifications. It was her boss that introduced her to the Smallman Galley concept.

Although her professional food experience largely is on the corporate end of the food system, she grew up with a connection to restaurants. Her uncle owned a restaurant in Ben Tre, Vietnam, and her aunt was the primary producer of bánh mì buns for the city. Le moved with her family from Vietnam to Sioux City, Iowa, when she was 12, and worked as a waitress and helped with food prep at a local Vietnamese restaurant.

She envisions Banhmilicious as fast-casual concept highlighting Vietnamese fusion food. “These are flavors that are getting more and more popular in America. We want to bring it to Pittsburgh,” Le says. 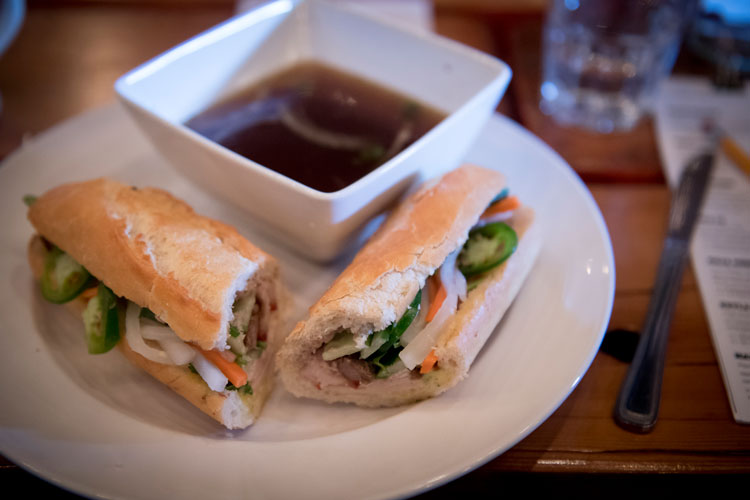 “We’re probably going to start slowly, with a smaller menu,” she adds.

Looks for an opening menu that will include three to five varieties of bánh mì, including at least one vegetarian option. There also will be a handful of appetizers such as egg rolls and vegetarian spring rolls. And, Le says, “We want to incorporate healthy food trends such as bone broth into our concept. But of course, we’ll infuse Vietnamese flavor into that.”

Le says that working with local farmers and ranchers is one of her primary goals and that she’s going to spend part of her time establishing relationships with them before opening Banhmilicious. 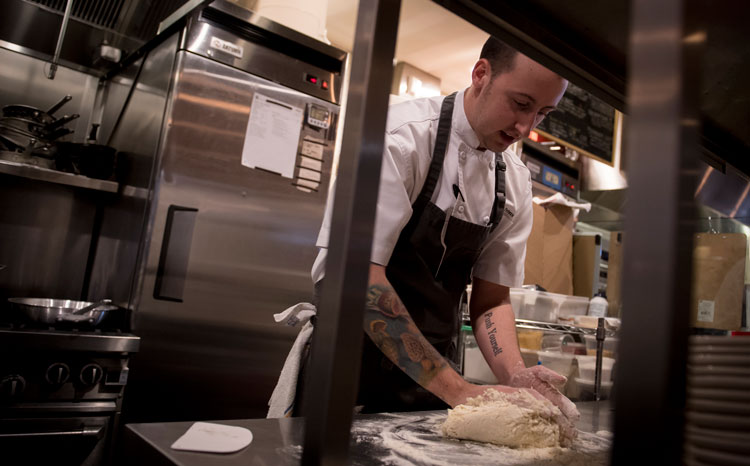 Ryan Peters, brunoise
Peters, 23, is the youngest member of the new Smallman Galley class. He also is the chef that I’m most excited to see participating in the restaurant incubator.

Peters grew up in Reading and moved to western Pennsylvania to attend the Indiana University of Pennsylvania 1-year culinary program. Peters took an externship at the exclusive Ocean Reef Club in Key Largo and then returned to Pittsburgh, where he landed a job as a chef at Salt of the Earth in Garfield. “Working there under Chad [Townsend] started the path for me to cook the type of food I wanted to do,” he says.

Peters left Salt and returned to the Ocean Reef Club, where he currently works as a banquet chef, serving parties of anywhere from two to 2,500. “Being in a private club for the past few years has its pros and cons. But I’m excited to get back into cooking for the public,” he says.

Even though he’s early into his career, Peters has taken advantage of a couple of significant opportunities. He participated in the Bocuse d'Or USA Young Chef competition, which led to a month-long stage at the prestigious French Laundry in Napa last year. “I took more non-food-related things like habit and work ethic from that. It’s all part of my everyday work,” he says. 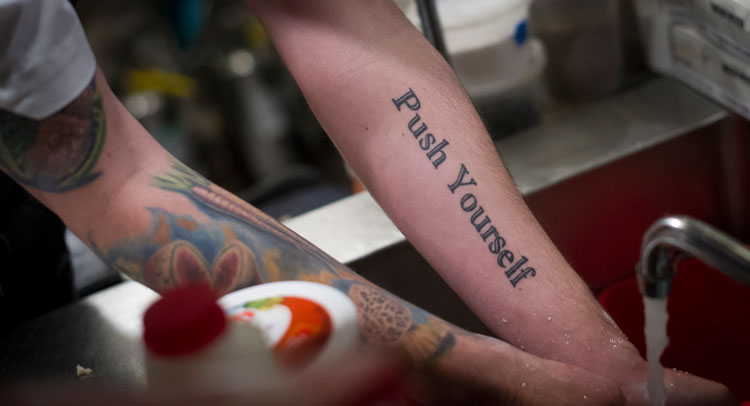 Peters intends to use his residency at Smallman Galley as a means to continue to develop his culinary voice. “I want to see what works and doesn’t work, and what people enjoy. I want to see how far I can push myself,” he says.

“I don’t have a way to describe my concept. It’s good food. It’s at a certain level of refinement. But there’s not a specific genre.”

Peters says he currently is working on the opening menu. Everything is on the table but look for something that’s going to lean toward the refined side. “I want to steer away from sandwiches and things like that,” he says.

“You can do whatever you want in this environment. There’s no limit.” 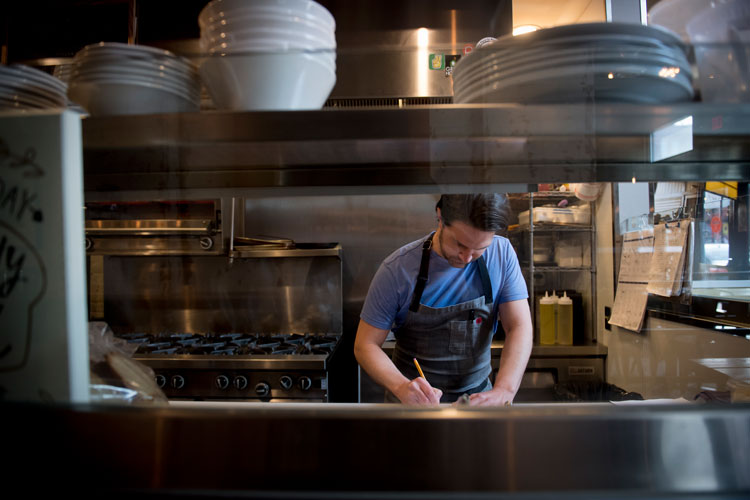 Pete Tolman, Iron Born
Pete Tolman is bringing something new to Pittsburgh: Detroit-style pizza. “If I can scale up and do this before anyone else, it’s a big opportunity,” says Tolman, who is calling his restaurant Iron Born.

Detroit pizza is baked in rectangular, deep-dish pans and has a crisp, fluffy (though not as light as pizza al taglio) base. It typically is assembled in reverse order than a traditional pie is built, with cheese preceding sauce. The kicker is the pizza’s rind, which is ringed with caramelized cheese. Yeah.

Aside from loving the style of pizza, Tolman has no direct connection to Detroit. He’s worked for the past few years as the Corporate Executive Chef of Market District, dealing with quality management of the grocery chain’s specialty store’s prepared food section as well as overseeing personnel management.

Before working for Giant Eagle, Tolman worked for the esteemed Pittsburgh chef Dave Racicot (täkō) at Lautrec, the fine-dining restaurant at Nemacolin Woodlands Resort. “Dave is a mentor. He does everything perfect. He taught me how to focus, multi-task, all that fine dining stuff. You don’t mess around with him,” Tolman says. 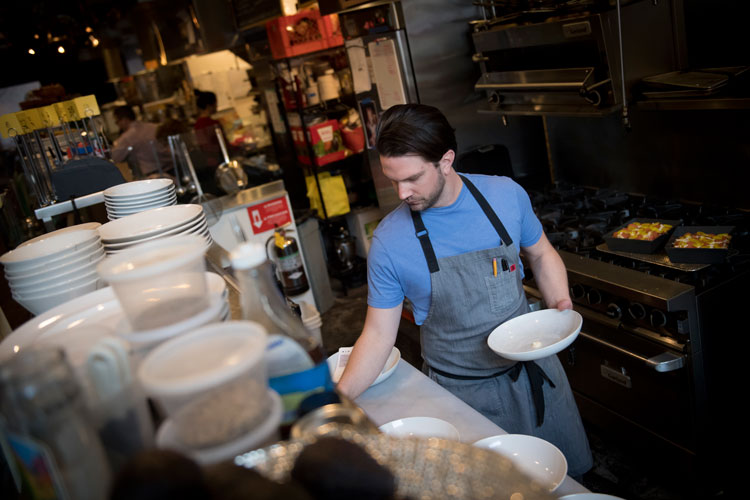 Tolman says that Iron Born’s pizza will diverge from traditional Detroit-style (he’s calling what he’s doing Detroit-inspired) in that he’s going to use a longer fermentation process than typically called for and he’s planning on putting the sauce under the cheese. The signature, crispy cheese crust remains.

“If people from Detroit come here they’ll know it’s not exactly Detroit-style, but they’ll still know what it is,” he says.

Tolman says that he also plans to roll out a menu with pasta dishes, bar-food during college football and other popular televised athletic events and even high-end dishes such as lobster. “I want to listen to what people want. If they want pizza and pasta, we’ll give it to them. But if they want a burger, mine is awesome,” he says.

[I have a feeling that exactly is what’s going to happen.]