We have the lowdown on who is cooking what in the new North Side food hall from the operators of Smallman Galley. 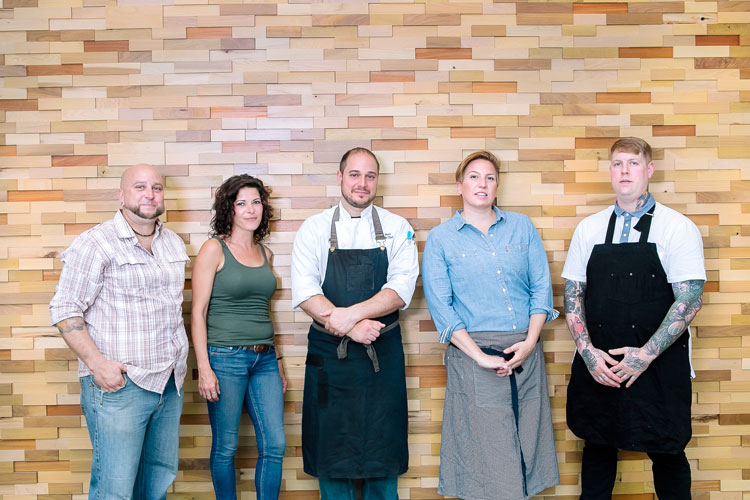 Building on the success of the nearly 3-year-old Strip District incubator Smallman Galley, Tyler Benson and Benjamin Mantica, co-founders of The Galley Group, are ready to expand their idea to a second location. Their new four-restaurant venture, Federal Galley, is slated for a November opening at Nova Place in the Allegheny Commons.

"We're crazy enough [that we want] to do it again,” jokes Benson.

“The North Side is a great fit for us,” he adds. "There's residential. Plus, there's the Children's Museum and there's [the New Hazelett Theater] next to that. There's the stadiums. And over 1,000 office workers within a stone's throw of Nova Place."

Federal Galley is a 5,500-square-foot space with seating for 150 inside and 100 outside. In additon to the four restaurants there will be a full bar; Galley Group beverage director Tim Garso will oversee the development of the bar program with veteran bartender Cat Cannon, who will run the day-to-day operations (their Smallman Galley menu is one of the most whimsical and delicious in town).

Benson and Mantica say that the Federal Galley owner/operators won’t work under the same restaurant incubator structure as Smallman Galley (no fixed one-year term, for example) but still are going to be provided structural advantages not found in a typical food hall. "A lot of food halls are put together by real estate developers looking to mitigate their risk with the space. They expect businesses to come and go. We want to differentiate ourselves by providing back-end support to our operators,” Benson says.

If all goes as planned, Federal Galley won’t be the last food hall the duo will run. "We don't want to stop there. We want to keep growing. We've found a way to make this business model economically viable,” Mantica says.

While they develop plans for more locations (Detroit and Cleveland are listed on the Galley Group's website, they'll focus on the opening of Federal Galley and its slate of owner/operators. Here they are: 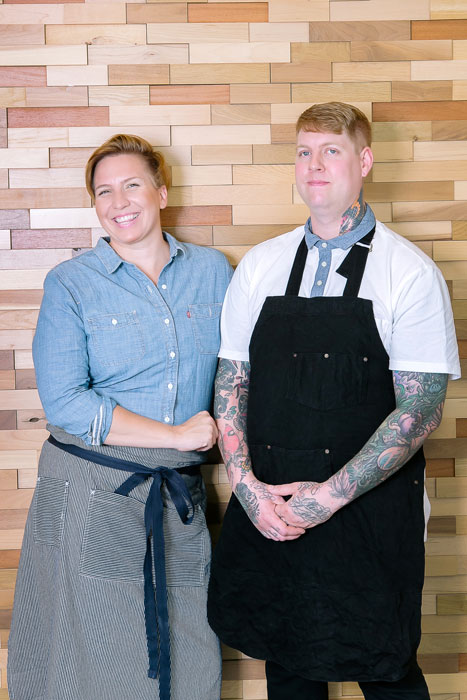 Michigan natives Kristin Calverley and Nate Peck believe that Pittsburgh is big enough for two Detroit-style pizza joints. Their Michigan & Trumbull will be Pittsburgh’s second establishment to serve the airy, deep-dish, cheese-crust, “How did this mainly stay a regional thing from the 1940s until just a few years ago?!” pizza style.

“We couldn’t find the Detroit-style pizza when we moved to Pittsburgh, so I started messing around with different kinds of pizza doughs,” says Peck, who worked as a chef at Cafe Via in Birmingham, Mich., prior to moving to Pittsburgh in 2012.

Calverley moved to Pittsburgh for school in 2002, and she worked as a server at Girasole in Shadyside until she returned to Michigan to take a corporate job in 2008.

A few years later, a series of work-related events led to a career change, with Calverley working in a taco truck in Detroit and commuting on weekends back to Pittsburgh to work in the kitchen at Girasole. “Jen Gerasole took me under her wing and taught me every station in the kitchen,” she says.

The couple decided to make a move. “I knew Pittsburgh was about to explode and that Nate’s talent would resonate here more than it would in Michigan,” she says.

Peck, who has worked as a chef at Point Brugge since he moved to Pittsburgh, says that the dough will start with a poolish, a French method of fermentation where half of the bread’s water and flour ferment at room temperature for 24 hours before the rest is mixed in. He’ll cook the pizza in blue-steel pans from Detroit Pizza Company.

Peck is diplomatic about the possibility of a Detroit-style pizza war with fellow Galley Group restaurant Iron Born, which introduced the city to the “how why how why how had I never heard of this before pizza?!” in June. “I keep telling myself that we didn’t invent Detroit-style pizza. We’re just going to make it the way we think it should be. Ours is different than the other place that’s doing this,” he says.

I have a feeling there’s more than room enough for both of them. 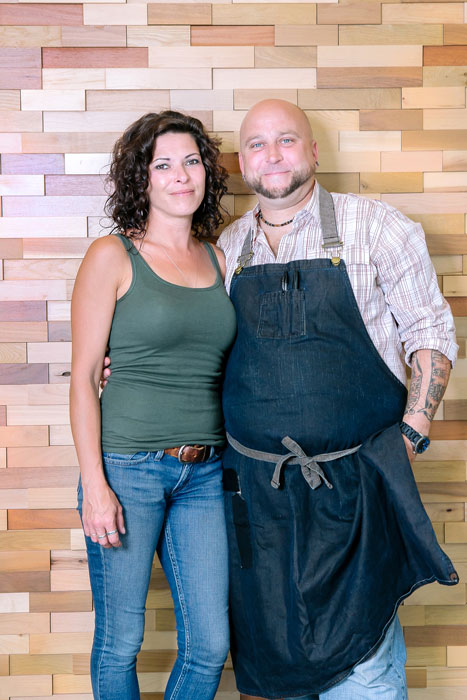 Fans of Smallman Galley already are familiar with one of the two concepts — Provision — that Stephen K. Eldridge and Susan Cope are set to launch at Federal Galley.

The couple moved from Phoenix to open Provision at Smallman Galley; both of them came here with significant restaurant industry experience.

"I got labeled a bit as the meat-focused guy (at Smallman Galley). I’m planning on working a lot more with vegetables now that Provision is here,” says Eldridge, who will serve as executive chef of both restaurants.

Eldridge says that he plans to take advantage of Federal Galley’s larger prep space and, although the initial Federal Galley menu basically will mirror the final Smallman Galley menu, Provision eventually will offer an expanded menu which will include more vegetable-forward dishes. Meat-lovers still will be satisfied with returning dishes such as the Provision burger, which would have (easily) made the cut for Pittsburgh Magazine’s August feature “Hamburgers! Hamburgers! Hamburgers!” if they were available at the time and red-chile braised beef short ribs.

The duo also will introduce El Lugar, a pan-Mexican concept influenced by the couple’s extensive travels in Mexico and their Arizona and Los Angeles upbringing.

"We started cooking Mexican food at home when we moved to Pittsburgh because we missed the food we were used to eating in Arizona,” says Cope.

Eldridge says the El Lugar menu will go well beyond a stereotypical Cal-Mex list of tacos and burritos and also will focus on items such as sopes, tortas, huarache and ceviche. However, he says, don’t expect an replica of what you might find in Cozumel. “My biggest concern is sourcing some of the ingredients with the quality I'd like. So you might not see Cotija cheese on the menu if all that's available here is the generic stuff. Instead, you might see a great goat's milk feta from a local producer,” he says.

The couple also is conscious to the sensitivities that might come with two Caucasian business owners operating an establishment that serves Mexican cuisine, and they hope that diners will try what they are offering with an open mind.

"We've definitely thought about it,” says Cope. "There's a different perception of this in the Southwest and California. Although I didn't grow up with [cooking] tamales in the kitchen, it always was part of my world."

"I hope we don't run into it (blowback). I hope people come in here and enjoy the food for what it is,” adds Eldridge. "We're going to be honest, work hard, be ourselves and represent our family as well as we can." 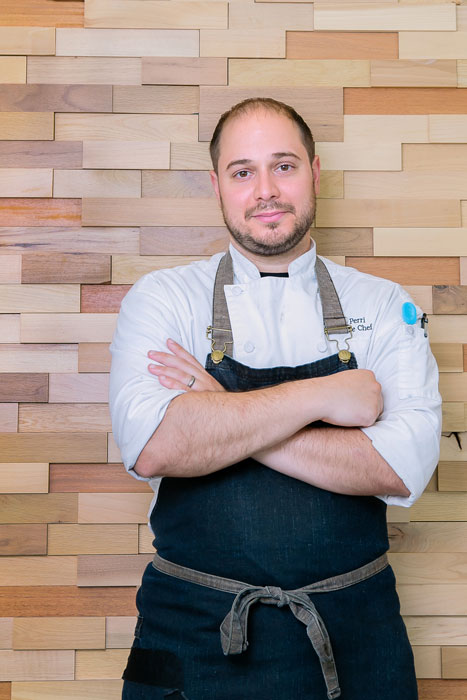 Vincent Perri left his position as executive chef of Revel + Roost Downtown in June to focus on his Federal Galley concept, which he’s calling Supper. “Supper is an informal type of evening meal. My concept is going to reflect that,” he says, adding, “We’re still going to have lunch and brunch.”

Prior to running the Revel + Roost kitchens, Perri worked as executive sous chef at Jackson’s Southpoint and for three years as chef de partie at Daniel Boulud’s DB Bistro in Miami.

Supper is a New American, vegetable-forward restaurant. Many items will be vegan, vegetarian and gluten-free, and just about everything, including tempeh and tofu, will be made in-house. He says that while gluten-free and vegan dishes are going to be a big focus of the menu, nobody is going to feel left out. “I’ll probably have a bigger menu than people are used to seeing in a food hall concept,” Perri says.

“I’ve done openings before and I’ve been an executive before but I've never had the opportunity to do it for myself. That’s the best part of it for me,” he says.